Earth just had its hottest September on record

September 2020 was our planet’s hottest September since 1880. With 3 months left, 2020 could rank among the top 3 warmest years on record for the globe. 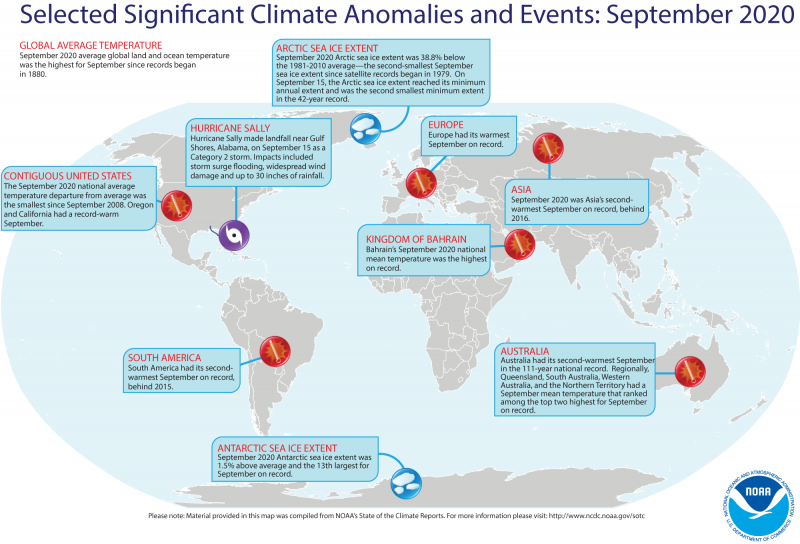 View larger. | A map of the world plotted with some of the most significant weather and climate events that occurred during September 2020. Image via NOAA.

According to scientists at NOAA’s National Centers for Environmental Information (NCEI), unprecedented heat around the world vaulted September 2020 to the hottest September since 1880.

The NOAA report, released October 14, says that September’s warmth also contributed to 2020’s trend as a remarkably hot year, with the year-to-date global temperatures running second highest in the 141-year climate record. According to a statistical analysis done by NCEI scientists, 2020 will very likely rank among the top three warmest years on record. 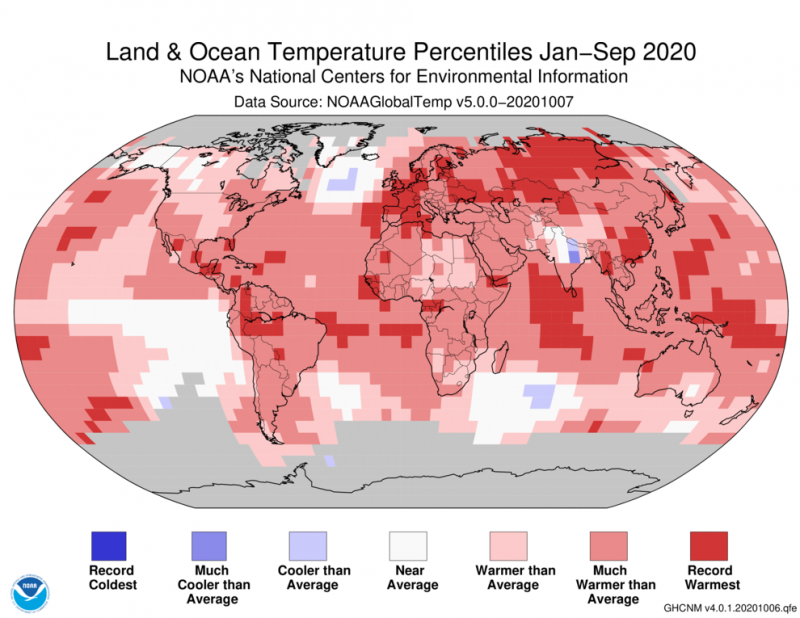 In addition, Arctic sea ice was at near-record lows. An analysis of satellite data by NASA and the National Snow and Ice Data Center showed that 2020’s minimum extent of Arctic sea ice – the smallest area of the floating sea ice cover of the year, likely reached September 15 – was the second-lowest extent (behind 2012) since modern record keeping began in late 1970. The 14 smallest minimum annual extents have occurred in the last 14 years.

This is telling us that the Arctic Ocean is on a trajectory to have a seasonally ice-free Arctic Ocean, and this year is another nail in the coffin. The 14 lowest sea ice extents have occurred in the past 14 years. It never got any better, and there is no indication of recovery. We are in a new Arctic, something we have never seen before.

It’s been a record-hot year-to-date so far for some parts of the globe: Europe, Asia and the Gulf of Mexico had their warmest January-through-September period on record; South America and the Caribbean region had their second highest. No land or ocean areas had record cold year-to-date temperatures.

Bottom line: September 2020 was the hottest global September in the 181-year record.

Source: Should We Expect Each Year in the Next Decade (2019–28) to Be Ranked among the Top 10 Warmest Years Globally?