On September 15, 2020, Arctic sea ice reached its annual minimum extent, the 2nd-lowest on record. The Arctic region in general is warming 3 times faster than the rest of the planet.

An analysis of satellite data by NASA and the National Snow and Ice Data Center shows that the 2020 minimum extent – the smallest area of the floating sea ice cover of the year – was likely reached on September 15, and measured 1.44 million square miles (3.74 million square km).

Sea ice in the Arctic Ocean undergoes seasonal patterns of change. In winter, frozen seawater covers almost the entire Arctic Ocean and neighboring seas. This sea ice thins and shrinks during late spring and summer, and thickens and expands during fall and winter.

In the last two decades, the extent of Arctic sea ice cover in the summer has dropped markedly. The lowest extent on record was set in 2012, after a late-season cyclonic storm broke up the remaining ice. Last year’s extent was tied for second-lowest, until this year’s took sole possession of second-lowest on record.

This is telling us that the Arctic Ocean is on a trajectory to have a seasonally ice-free Arctic Ocean, and this year is another nail in the coffin. The 14 lowest sea ice extents have occurred in the past 14 years. It never got any better, and there is no indication of recovery. We are in a new Arctic, something we have never seen before. 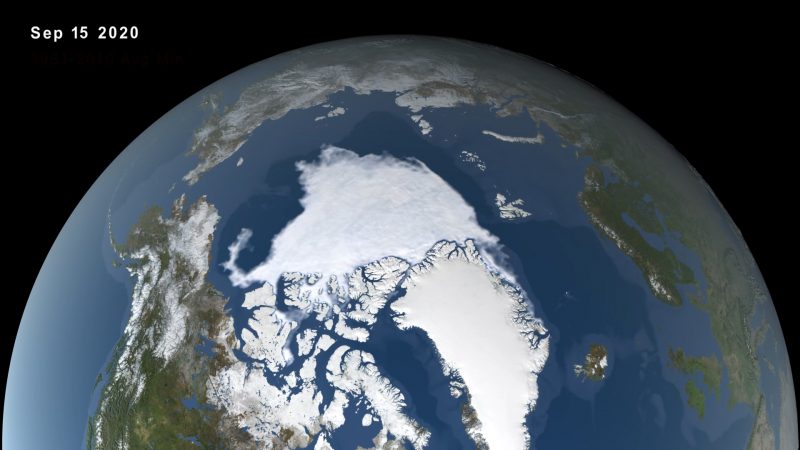 It was just really warm in the Arctic this year, and the melt seasons have been starting earlier and earlier. The earlier the melt season starts, the more ice you generally lose.

The numbers that we’re getting in terms of extent of sea ice decrease each year put us pretty much on red alert in terms of the level of worry that we have, our concern for the stability of this environment.

Dramatic drops in sea ice extent in 2007 and 2012, along with generally declining summer extent, has led to fewer regions of thick, multi-year ice that has built up over multiple winters. In addition, a recent study showed that warmer water from the Atlantic Ocean, which is typically deep below the colder Arctic waters, is creeping up closer to the bottom of the sea ice and warming it from below.

There are cascading effects in the Arctic, Serreze said. Warmer ocean temperatures eat away at the thicker multiyear ice, he said, and also result in thinner ice to start the spring melt season. Melt early in the season results in more open water, which absorbs heat from the sun and increases water temperatures. Serreze said:

As the sea ice cover extent declines, what we’re seeing is we’re continuing to lose that multiyear ice. The ice is shrinking in the summer, but it’s also getting thinner. You’re losing extent, and you’re losing the thick ice as well. It’s a double whammy.

The second-lowest extent of sea ice on record is just one of many signs of a warming climate in the north, Serreze said, pointing to the Siberian heat waves, forest fires, hotter-than-average temperatures over the Central Arctic, and the thawing permafrost that led to a Russian fuel spill.

Read more from the National Snow and Ice Data Center