The formation of Subtropical Storm Theta on November 10 over the northeastern Atlantic Ocean made the 2020 season the most active on the 169-year record.

Satellite image of tropical storm Theta on November 10, 2020, as it swirled in the Atlantic Ocean southwest of Portugal. Image via NOAA.

NOAA scientists announced yesterday that, with less than a month remaining in this year’s Atlantic hurricane season, the formation of Subtropical Storm Theta on November 10 over the northeastern Atlantic Ocean made the 2020 season the most active on the 169-year official record.

Theta – the 29th named storm of the Atlantic season – breaks the record for the highest number of tropical/subtropical storms in a single year. The previous record of 28 storms was set in 2005.

As of this afternoon (Wednesday, November 11) Florida is bracing for a second hit from Eta – the 28th storm of the season – which has weakened to a tropical storm just hours after regaining hurricane strength. The storm has been in the Gulf of Mexico since crossing over South Florida on Sunday. 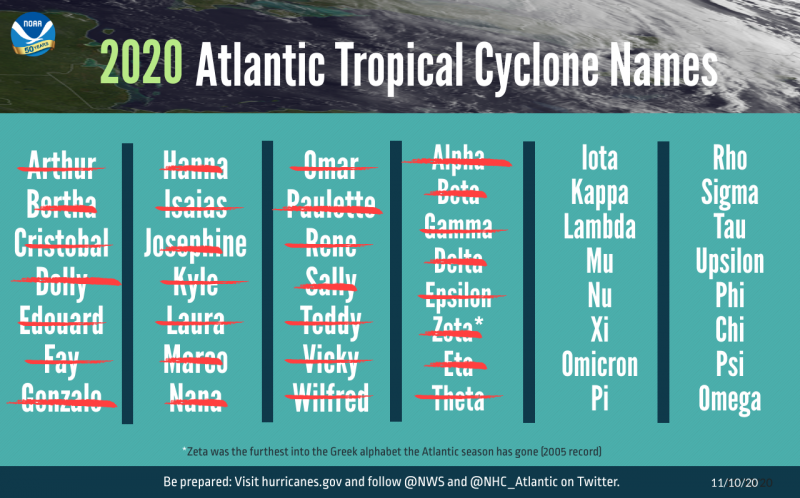 The list of named storms that have occurred during the Atlantic hurricane season as of November 9, 2020. With the formation of Theta, the 2020 Atlantic season has surpassed 2005 as the busiest on record with 29 named storms so far. The season ends November 30. Image via NOAA.

The 2020 season began early when Arthur formed on May 16. The extremely active season quickly went through the predetermined list of 21 names, ending with Wilfred on September 18. Then for only the second time in history, the Greek alphabet was used for the remainder of the season, with Alpha forming the same day. In September, there were five active storms in the Atlantic at the same time. 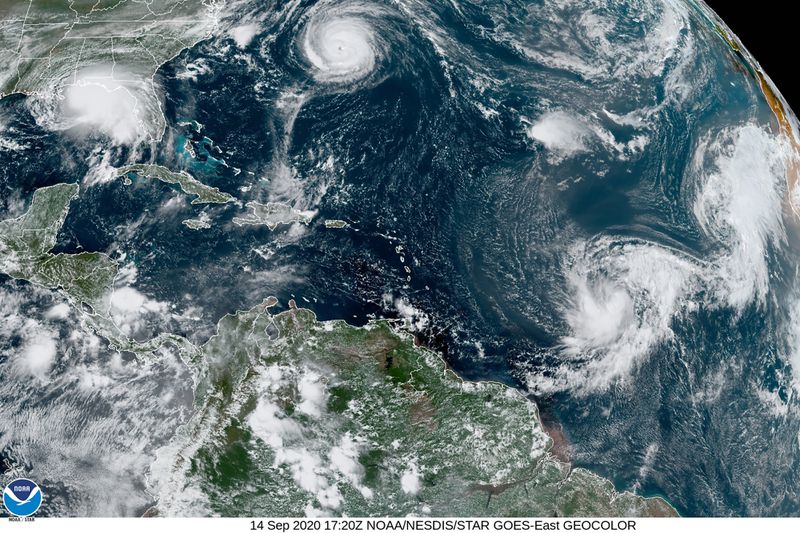 This satellite image shows 5 tropical cyclones churning in the Atlantic basin on Monday, September 14, 2020. The storms, from left, are Hurricane Sally over the Gulf of Mexico, Hurricane Paulette over Bermuda, the remnants of Tropical Storm Rene, and Tropical Storms Teddy and Vicky. Image via NOAA.

A record 12 named storms and six hurricanes have made landfall in the U.S. this year – so far – with some communities hit repeatedly by strong winds and flooding. For example, parts of southern Louisiana were devastated by Hurricane Laura in late August, which brought 150 mph (240 kph) winds and severe flooding that claimed 42 lives, only to get blasted again by Hurricane Delta and Hurricane Zeta in October.

Louis W. Uccellini is director of NOAA’s National Weather Service. He said in a statement:

After the historic Atlantic hurricane season of 2005, it’s remarkable to have another season during my career that would reach this extreme level of activity.

The Atlantic hurricane season officially ends on November 30, but additional storms could develop beyond that date. Forecasters at NOAA’s National Hurricane Center continuously monitor the tropics for storm development and activity.

Bottom line: The formation of Subtropical Storm Theta on November 10 over the northeastern Atlantic Ocean made 2020 the most active Atlantic hurricane season on the 169-year record.