It’s official. The National Oceanic and Atmospheric Administration (NOAA) and the National Aeronautics and Space Administration (NASA) confirmed on January 16, 2015 that 2014 was Earth’s warmest year since record-keeping began in 1880. 2010 owned the title for warmest year prior to 2014, with 2005 and 1998 just behind it. It might have been cool where you lived, but most of the globe was experiencing temperatures well above average. The report also says that global oceans experienced the warmest year ever recorded, making ocean temps in 2014 the highest among all years in the 1880–2014 record, and surpassing the previous records of 1998 and 2003 by 0.09°F (0.05°C).

Six months of 2014 – May, June, August, September, October, and December – had record warmth for land and ocean temperatures, combined beating out all monthly records set since 1880.

If you don’t believe NOAA and NASA (which you should), the Japan Meteorological Agency (JMA) also confirms that 2014 was the warmest year recorded since record-keeping has begun. Observed sea surface temperatures and anomalies for the Eastern Pacific in January 2015. 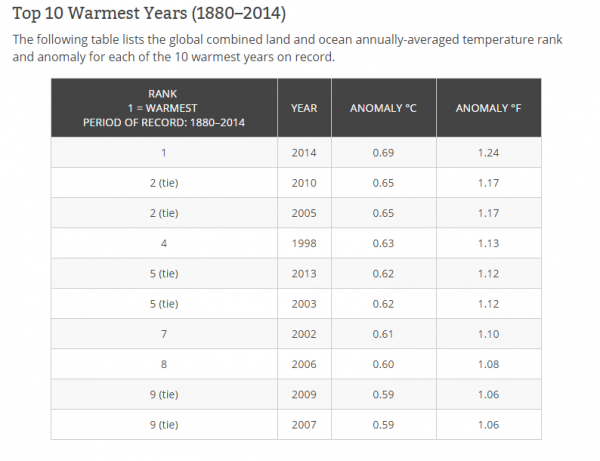 It is important to note that El Niño years are known to add an extra boost to global climate temperatures. El Niño develops when unusually warm ocean temperatures in the eastern Equatorial Pacific forms. When waters are unusually cooler than average, they are considered in the state of La Niña.

With this said, 2014 was projected to enter an El Niño, but it never formed as predicted with only neutral (near-average temperatures) conditions occurring in the equatorial eastern Pacific Ocean. Can you imagine how much warmer 2014 could have been had an El Niño formed? According to NOAA, there is a 50-60% chance an El Niño will form in the next two months with ENSO-neutral conditions favored afterwards. 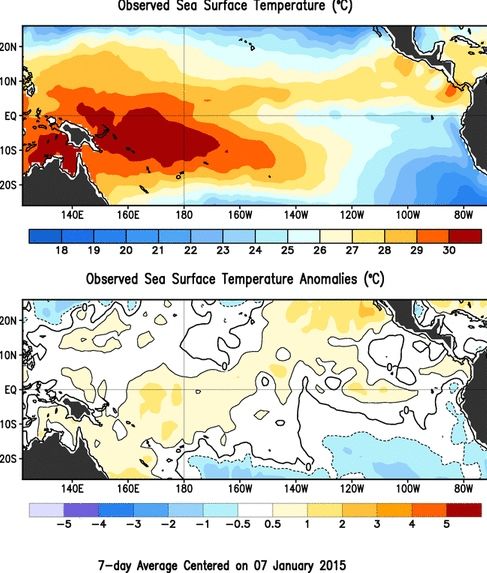 Observed sea surface temperatures and anomalies for the Eastern Pacific in January 2015. Image via NOAA

Here are the statistics for each month of 2014 across the globe measuring both land and ocean temperatures:

April 2014: April ended up being tied with 2010 as the highest globally-averaged temperature across land and ocean surfaces on record for the month. (0.77°C [1.39°F] higher than the 20th century average).

May 2014: This month became the warmest May recorded since record-keeping began in 1880 at 0.74°C (1.33°F) higher than the 20th century average. Four of the five warmest Mays ever recorded have occurred in the past five years.

June 2014: June, like May 2014, was the warmest June recorded since record-keeping began in 1880 at at 0.72°C (1.30°F) above the 20th century average. It beat out the old record set back in 1998, which was the year of an extremely active/strong El Niño (El Niños are known to add an extra boost to global climate temps). According to NOAA, nine of the ten warmest Junes on record have occurred during the 21st century, including each of the past five years.

July 2014: July was ranked as the 4th warmest July recorded since record-keeping began at 0.64°C (1.15°F) above the 20th century average. Eight of the ten warmest Julys have occurred within the past 10 years.

I am sure you have heard all of the talk that the past decade we have seen a hiatus in temperature trends going up across the globe: the so-called global warming pause. The important note to take into account is that the Earth continues to warm. Three of the past fives years rank in the top five warmest years. The warmth in the oceans have been a huge contributor to the warmer temperatures across the globe. We really should not pay attention to short term trends over ten years but focus more on the past 100 years. The point is that the trend continues to go up. To say that warming has paused or does not exist is simply to ignore overall statistics and research gathered by climate scientists.

Michael E. Mann, a climate scientist at Penn State, writes about the hiatus:

The record temperatures *should* put to rest the absurd notion of a ‘pause’ (what I refer to as the ‘Faux Pause’ in Scientific American: https://www.scientificamerican.com/…/earth-will-cross-the-c…/) in global warming. There is a solid body of research now showing that any apparent slow-down of warming during the past decade was likely due to natural short-term factors (like small changes in solar output and volcanic activity) and internal fluctuations related to e.g. the El Nino phenomenon. The record 2014 temperatures underscore the fact that global warming and associated climate changes continue unabated as we continue to raise the concentrations of greenhouse gases in the atmosphere. 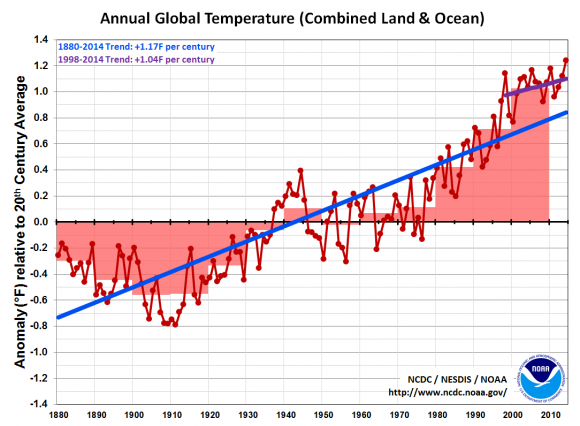 Dr. Marshall Shepherd, Director of the Atmospheric Sciences Program at University of Georgia and host of the Weather Channel’s show WxGeeks added:

This announcement is based on the entire planet not your backyard or where you live, so please resist the temptation to say ‘but it was cold where I lived.’ That is like saying just because you are out of sugar in your home, everyone in your neighborhood is, too. This is challenging because it is somewhat natural for people to think local. But resist the urge or talk to people in many other parts of the world.

Shepherd later talks about the scientific perception of warming versus what the public sees and understands.

Scientists tend to focus on trends, the amount of warming, or how fast it is warming. These are all very important, but they don’t really resonate with the public. To the average person, 1-2 degrees doesn’t sound like a lot. It perhaps even sounds trivial.

However, I like to frame the discussion in terms of a low-grade fever. If a child ran a 1-2 degree fever, most parents would be concerned. If that fever increased quickly over a relatively short period of time, the concern would likely heighten.

All of sudden 1-2 degrees doesn’t seem so trivial. Personally, I don’t focus as much on the trends and warming. I focus on how the Earth is already responding.

While some will argue that 2014 was nearly tied with other warm years like 2010, it is still showing signs that the heat on this planet continues to exist and slowly climb up. Every continent had some aspect of record high temperatures. A majority of the warmth has occurred in our oceans, and it there is no doubt that the high concentrations of carbon dioxide are the reason for this warmth. Finally, scientists do take into accounts of urban heat islands, solar output, and other climate drivers when they take into account how the Earth is warming. When they crunch it all together, it always comes back to high carbon dioxide values that show a significant driver in our warming world.

Bottom line: NASA, NOAA, and the Japan Meteorological Agency have now all reported that 2014 was Earth’s warmest year recorded since modern-day record-keeping began in 1880.