Here’s a look at the amazing and record-breaking year for tornadoes – 2011 – in the United States and the world. Many videos in this post.

In 2011, destructive tornadoes resulted in at least $25 billion in damages across the United States. The most notable outbreaks include the April 4-5, April 14-16, April 25-28, and May 22-27. Looking back at these storms, the April 14-16 outbreak was once thought to be “the worst tornado outbreak” for the 2011 spring season. However, April 25-28 outbreak proved otherwise, and ended up being one of the largest most destructive outbreaks seen in our lives. The month of May 2011, also known to be one of the more active months for tornadoes across the central United States, started off relatively quiet as dry air and sunshine was the dominant weather. However, by the end of May, another large series of storms broke out, and one storm ended up producing a violent EF-5 tornado that destroyed the city of Joplin, Missouri.

Killer tornadoes in 2011 across the United States. Image Credit: NOAA 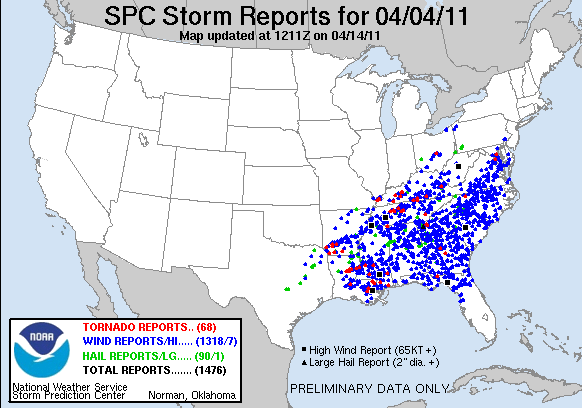 Forty six tornadoes formed in the central and southern U.S. on April 4-5, 2011, resulting in nine deaths and $2 billion in ensured losses. The system that pushed through the U.S. was not a significant tornado threat as it was a huge wind event. The storm system produced a squall line or quasi linear convective system that produced winds over 70 mph. It resulted in widespread damage, particularly across the southeast.

Large squall line produced violent winds of over 70 mph across the Southeast on April 4, 2011. 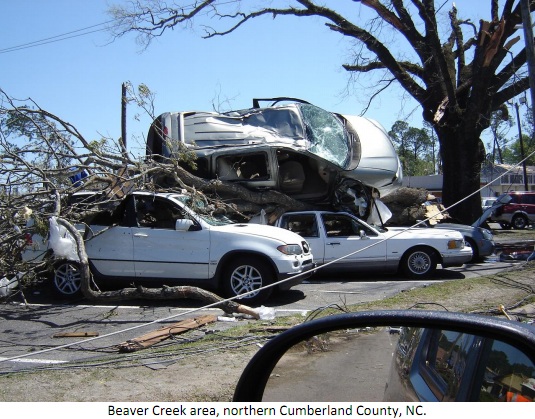 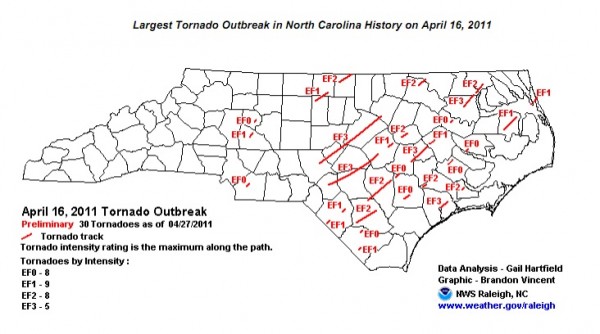 The tornado outbreak of April 14-16, 2011 was thought at the time to be 2011’s most severe outbreak, as most springs typically have one event that is highlighted for severe weather across the southeast. During these few days, 177 tornadoes erupted across the central and southeastern U.S., resulting in 38 deaths. The biggest surprise from this tornado outbreak was that the majority of the tornadoes that formed were relatively weak around the EF-0 to EF-2 range. Fourteen tornadoes were ranked as an EF-3 tornado, and not a single storm produced the violent EF-4 to EF-5 tornado. The biggest headlines from this outbreak resulted from the destructive tornadoes that formed across North Carolina. April 16, 2011 was the largest tornado outbreak in North Carolina history as 30 tornadoes formed causing a lot of damage and 22 deaths. April 14-16, 2011 was the second largest tornado outbreak of three days or less duration on record, and fifth largest outbreak of six or fewer days duration.

The largest, most significant outbreak of 2011 occurred during April 25-28, 2011. I have never seen all of the parameters for severe weather so high in my life. Everything was off the charts. Helicity levels (spin in atmosphere), instability, significant tornado parameter, and wind shear all were as high as I have ever seen. The National Weather Service and the Storm Prediction Center (SPC) knew this event would be violent and devastating over the southeast. In fact, the day three outlook released by the SPC showed a moderate risk for severe weather across Alabama, which is extremely rare to see that far out in advance. In fact, 343 tornadoes formed with 321 people dying from violent, long tracked tornadoes. Over $10.2 billion in damages were estimated for this outbreak. Four tornadoes were ranked as an EF-5 with winds over 200 mph:

3) Hackleburg, Alabama tornado- 71 people were killed and it produced a 25-mile path length. 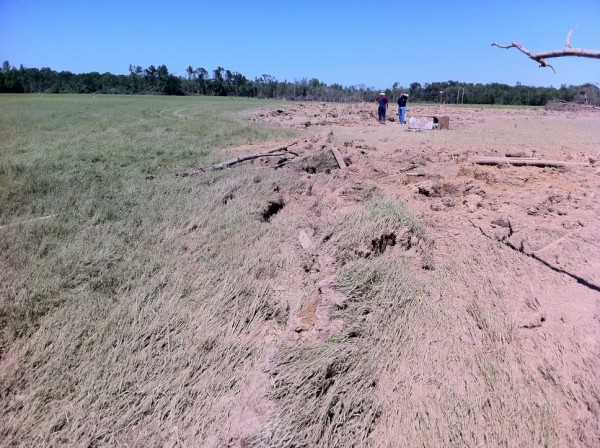 EF5 in MS: THE TORNADO ACTUALLY GOUGED OUT LARGE SECTIONS OF THE GROUND. IN ONE SPOT IN NORTHEAST NESHOBA COUNTY…THE GROUND WAS DUG OUT TO A DEPTH OF AROUND 2 FEET OVER AN AREA APPROXIMATELY 25-50 YARDS WIDE AND A COUPLE OF HUNDRED YARDS LONG. 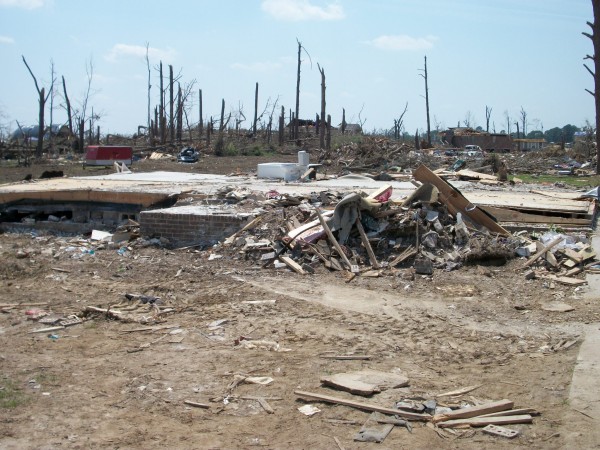 The tornado outbreak on April 27, 2011 featured 199 tornadoes touched down and was recorded as the largest one-day total on record. It surpassed the 148 tornadoes of the April 3-4, 1974 tornado outbreak. The most memorable damage occurred in Hackleburg, Tuscaloosa, Concord, Pleasant Grove, and Cullman, Alabama. One of the remarkable statistics about the storm that produced the EF-4 tornado in Tuscaloosa/Birmingham was that is formed in Newton County Mississippi and dissipated in Macon county, North Carolina. The lone storm existed for seven hours and 24 minutes and traveled 380 miles producing a long track tornado for over 80 miles. It killed 64 people and injured 1,500 others. The image below shows the track of that individual supercell: 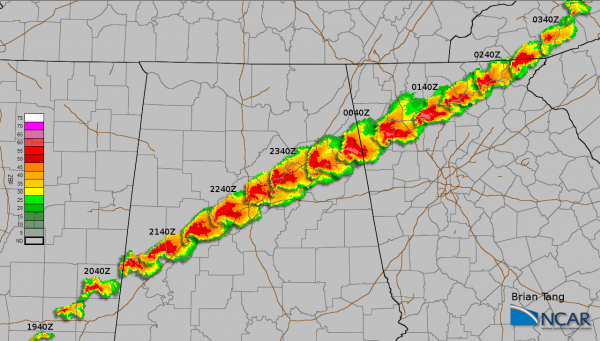 What truly made this event so awful was that a line of severe storms pushed through Alabama that same morning before the violent tornado outbreak. Many people were without power, and many had to rely on smartphones and NOAA weather radio to receive their warnings. This event was a double whammy, and although it was warned about days in advance, the power and destruction of the storms were too much to prevent deaths. These tornadoes moved through populated areas and were so strong that even staying in your basement did not guarantee survival.

The May 22-27, 2011 tornado outbreak brought 180 tornadoes in the central United States. This outbreak began with a deadly EF-5 tornado that hit downtown Joplin, Missouri resulting in 158 fatalities. It was the deadliest single tornado to strike the U.S. since modern tornado record-keeping began in 1950. The Joplin tornado ended up costing over $3 billion in damages, making it the most expensive tornado in world history. After the Joplin tornado, more severe weather erupted across Missouri and eventually the south central U.S. including Oklahoma. The tornado outbreak resulted in 180 confirmed tornadoes and is ranked the fourth-largest six-day-or-shorter tornado outbreak on record. Over $9 billion was lost from the entire outbreak.

Watch the damage of an EF-5 tornado pushing into Joplin, Missouri:

Here are a few notable tornadoes that formed this year. Some tornadoes are from other countries:

Hook is signature of November 7 tornado

One of the biggest signs of detecting a tornado on radar is when the tornado hits a populated area and a debris ball is detected on reflectivity. We rarely see a debris ball, which shows a circular ball of higher reflectivity, typically in a dark red or purple color near the hook of a supercellular storm. A debris ball is formed when a tornado hits a populated area and debris flies into the air. Radar can detect this debris, and thus reflectivity shows darker colors where the debris is flying. The more intense the tornado becomes, the greater chances for the debris ball to become better organized on radar. 2011 gave us our full share of debris balls.

Can you find the debris ball? Image Credit: NWS Birmingham 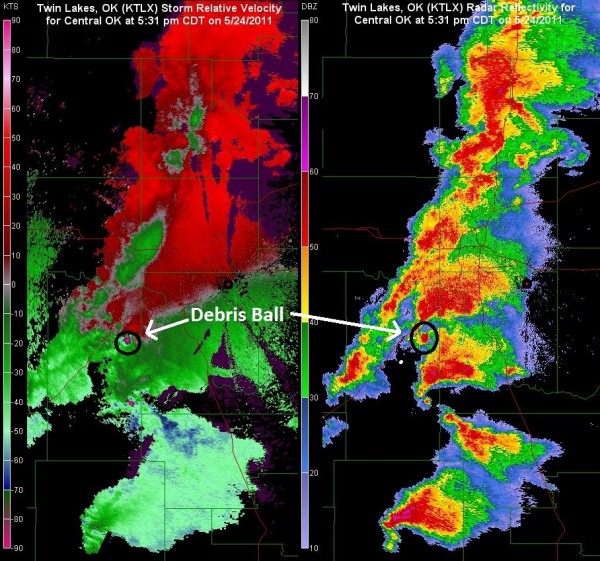 Tornadoes can form anytime and almost anywhere. Statistically, the United States experiences the most tornadoes than any country in the world due to the geography of the area. The location of the Rocky Mountains and the Gulf of Mexico are huge sources that contribute greatly to the development of severe weather. 2011 brought us a lot of extreme weather that resulted in over 552 deaths across the United States. We saw six tornadoes form this year that were rated an EF-5, with winds over 200 mph. Four of the EF-5 tornadoes developed on the April 27, 2011 outbreak, and the other two formed during the May 22-27 tornado outbreak in Oklahoma and Missouri. Strong tornadoes, rated EF-3 or higher, are typically rare occurrences. The National Climatic Data Center states:

… most tornadoes (around 77%) in the U.S. are considered weak (EF0 or EF1) and about 95% of all U.S. tornadoes are below EF3 intensity. The remaining small percentage of tornadoes are categorized as violent (EF3 and above). Of these violent twisters, only a few (0.1% of all tornadoes) achieve EF5 status, with estimated winds over 200 mph and nearly complete destruction. However, given that on average over 1000 tornadoes hit the U.S. each year, that means that 20 can be expected to be violent and possibly one might be incredible (EF5).

It’s truly remarkable that we saw six EF-5 tornadoes in one year. Now that the 2011 is over, perhaps we can experience a calm, quiet 2012 in the severe weather department. We truly need it.