Tropical Storm Don might have disrupted the 2011 summer dead zone in the Gulf of Mexico, making it smaller than scientists originally predicted.

Earlier this year, scientists said the 2011 dead zone in the Gulf of Mexico might be the biggest ever. But the 2011 dead zone – the zone of oxygen-depleted water that forms every year in the Gulf of Mexico – has been measured by these same scientists to be smaller than predicted, according to a release issued August 4, 2011. It’s possible that Tropical Storm Don disrupted the Gulf dead zone when it passed through in late July.

Dead zones are areas of oxygen-depleted waters that form when nutrients stimulate the growth of algae blooms. Algae eventually die, sink and decompose and the decomposition process, driven by microbial respiration, consumes large amounts of oxygen. The lack of oxygen can cause large die-offs of fish and other invertebrates and it poses a threat to recreational and commercial fisheries.

The dead zone in the Gulf of Mexico is triggered by nutrient-rich discharges of nitrates and phosphates from the Mississippi River. Sources of nitrates and phosphates include fertilizer runoff from agricultural crops, animal waste and human sewage. In June, scientists issued a report suggesting that extreme flooding of the Mississippi River in spring 2011 might result in the largest-ever dead zone in the Gulf of Mexico. The report came from a NOAA-supported team of scientists from the Louisiana Universities Marine Consortium, Louisiana State University and the University of Michigan. 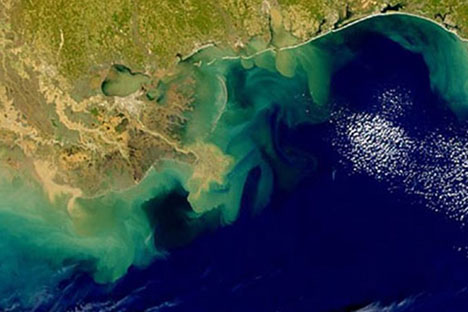 Algal blooms in Gulf of Mexico. Dead zones are areas of oxygen-depleted waters that form when nutrients stimulate the growth of algae blooms. (NASA)

The size of the dead zone in the Gulf of Mexico has averaged 6,688 square miles over the past five years. In 2011, scientists predicted that the dead zone would expand to between 8,500 and 9,421 square miles due to heavy spring flooding in the Mississippi River drainage basin and increased nutrient runoff.

Scientists measured the size of the dead zone in late July and early August 2011 during a research cruise led by Nancy Rabalais, executive director of the Louisiana University Marine Consortium, and discovered that the dead zone was only 6,765 square miles – smaller than predicted based upon their forecasting model. They believe strong wind and waves associated with Tropical Storm Don mixed the Gulf with oxygen-rich waters and disrupted the development of the dead zone. The current forecasting model does not incorporate short-term variability due to strong weather events. 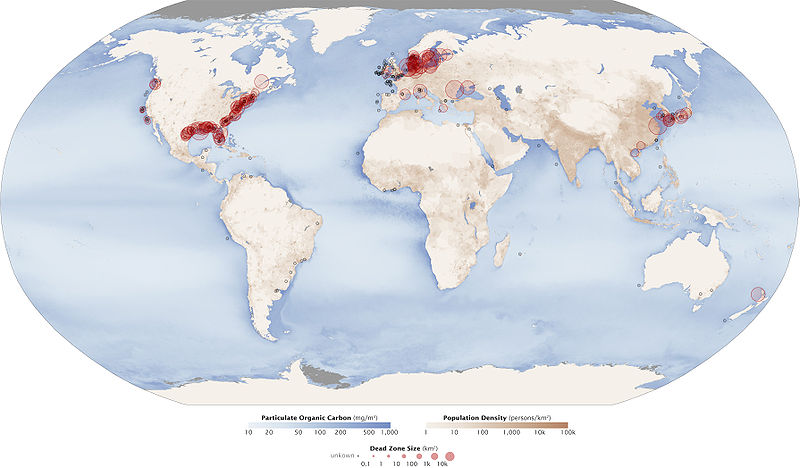 Red circles on this map show the location and size of many of our planet’s dead zones. Black dots show where dead zones have been observed, but their size is unknown. It’s no coincidence that dead zones occur downriver of places where human population density is high (darkest brown). Darker blues in this image show higher concentrations of particulate organic matter, an indication of the overly fertile waters that can culminate in dead zones. (NASA Earth Observatory via Wikimedia Commons)

Despite fluctuations in size due to each year’s weather conditions, these chronic, recurring hypoxic zones every summer represent a significant threat to Gulf ecosystems. Until we achieve a substantial reduction in nutrient pollution from the Mississippi River watershed, we will continue to experience extended periods of time each year when critically-needed habitat is unavailable for many marine organisms.

In mid-August, NOAA plans on sponsoring a follow-up cruise to collect an updated measure of the size of the dead zone in the Gulf of Mexico.

In June 2011, Nancy Rabalais said the 2011 Gulf of Mexico dead zone might be biggest ever