The year’s farthest quarter moon – yet the year’s closest lunar apogee – both fall on July 12, 2020. Coincidence?

Click here to see animation. As seen from the north side of the moon’s orbital plane, the Earth rotates counterclockwise on its rotational axis, and the moon revolves counterclockwise around Earth. The terminators of the Earth and moon align at first and last quarter moons.

The most distant quarter moon of the year falls on July 12, 2020. That’s because this quarter moon more closely aligns with lunar apogee – the moon’s farthest point from Earth in its monthly orbit – than does any other quarter moon in 2020.

Neil Degrasse Tyson, in an interview, once claimed, “The distance to the moon – okay, the moon orbits us. It’s sometimes closer and it’s sometimes farther away. It has nothing to do with the phase.” 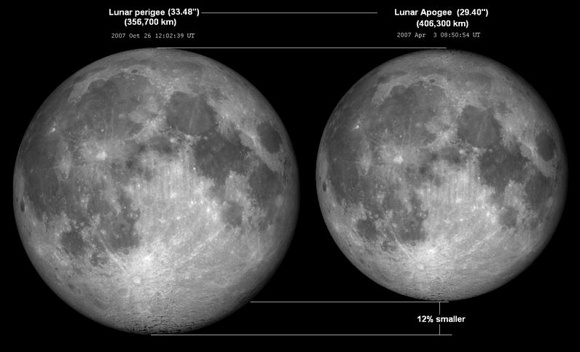 View larger. | The photo contrasts the micro-moon of April 2007 at the right to the supermoon (perigee full moon) of October 2007 on the left. Image via Wikimedia.

For those brave souls wanting to know why quarter moons at apogee/perigee don’t go out as far – or come in as close – as new and full moons at apogee or perigee, we provide an explanation below.

The line connecting lunar perigee with lunar apogee defines the moon’s major axis. At (A) the major axis is pointing directly at the sun, maximizing the eccentricity of the moon’s orbit. At this elongated eccentricity, perigee is maximally close and apogee maximally distant, giving rise to a perigee new moon (supermoon) and an apogee full moon (micro-moon). Then, 3 1/2 lunar months (103 days) later, at (B), the moon’s major axis makes a right angle to the sun-Earth line. This minimizes the eccentricity, lessening the apogee distance yet increasing the perigee distance; and that’s why the quarter moons at perigee/apogee never get as close or as far from Earth as perigean/apogean new or full moons. Seven lunar months (206 days) after the major axis points directly at the sun at (A), it points toward the sun at (C) – except that it’s an apogee new moon (micro-moon) and perigee full moon (supermoon). Generally, the closest perigee comes at full moon and the farthest apogee at new moon. Diagram via Bedford Astronomy Club.

Moon phases in 2021 via AstroPixels.

Lunar apogees and lunar perigees in the year 2021 via AstroPixels.