Venus, she or it?

Are you interested in the famous 8-year cycle of Venus? The charts in this post – from astronomer Guy Ottewell – illustrate it. Also, weigh in on whether you think we should describe Venus as she or it!

The path of the brightest planet, Venus, from the time it entered our evening sky in February 2018 until it leaves the sky again later this fall. Image via Guy Ottewell.

My mind is on Venus, because she (it) is bright in the evening sky, and because it (she) will probably be the subject of my second Longer View book. There will have to be a minor section on the question of referring to whether Venus is a “she” or an “it,” and a major one on the famous eight-year Venus cycle. That cycle is partially illustration by the charts on this page.

The views are from latitude 40 degrees north, at sunset and sunrise. Venus’ visible disk is exaggerated 600 times in size, as if seen through a telescope. The dashed line is the celestial equator, an imaginary line in our sky directly above Earth’s equator. 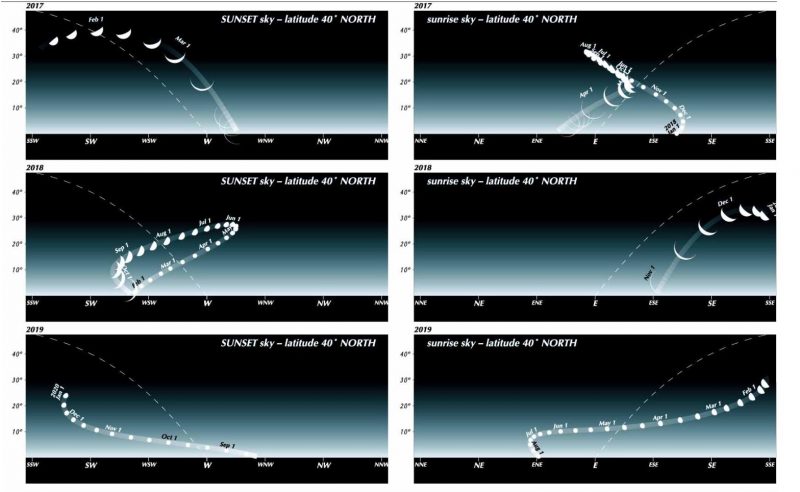 This September, Venus is coming in along the curve that will take it between us and the sun on October 26. It is reaching a climax of brightness, but, for the Northern Hemisphere, is unfavorably low in our twilight sky.

The situations in the preceding and following years is completely different. Clearly, Venus’ performances in successive years vary greatly.

Yet they are almost exactly repeated 8 years later, as illustrated by the chart below, showing Venus’ movements in the evening and morning skies of 2025, 2026, and 2027. 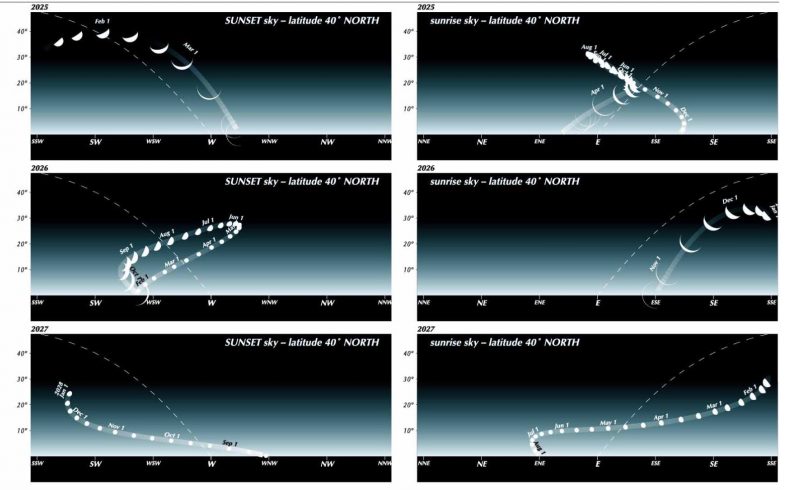 The Cycle of Venus is not to be confused with the Girdle of Venus, which, laid around the goddess’s hips, made her irresistible – another topic.

*Note: In the images above, we could have the morning or eastward scene on the left and the evening scene on the right; I’d welcome your opinions on which way around seems more understandable. An advantage of the way shown is that you can imagine Venus descending into invisibility in front of the sun, between the pictures, and reappearing on the sun’s right; a possible disadvantage is that north is in the middle, so that the whole pair is a kind of northward view, whereas for sky-gazing we usually orient ourselves by facing south, with east on our left.

Bottom line: Illustrations of the famous 8-year cycle of Venus. Tell us in the comments below … should we describe Venus as “she” or “it”?