Use Big Dipper to find bright star Capella in fall

The phrase spring up and fall down gives you some idea of the Big Dipper’s place in the evening sky throughout the year. On fall evenings in the Northern Hemisphere, the Big Dipper sits low in the northern sky. Still, if you’re at a high-enough latitude to see the Big Dipper in fall, you can use this famous star pattern to find the bright star Capella in the constellation Auriga the Charioteer. The top two bowl stars point toward Capella, as we depict on the sky chart below. 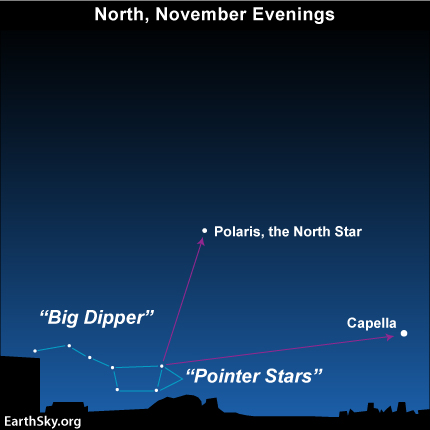 It’s a long jump from the Big Dipper bowl stars to Capella. Our feature chart at top goes all the way from northwest to northeast. That’s about one-fourth the way around the horizon.

In the far southern U.S., you won’t see the Big Dipper on these November evenings, because it’ll be beneath your northern horizon.

The good news is that, although the Big Dipper and Capella move throughout the night, the Big Dipper bowl stars always point in the general direction of Capella, which is the northernmost first-magnitude star in all the heavens. So, no matter what time of night you look, you can always use the Big Dipper to find Capella.

Thank you! Your submission has been received!
Oops! Something went wrong while submitting the form.
END_OF_DOCUMENT_TOKEN_TO_BE_REPLACED