Are asteroids hiding among the Taurids?

And, more to the point, are any asteroids that might be hidden in the Taurid meteor stream potentially hazardous to Earth? 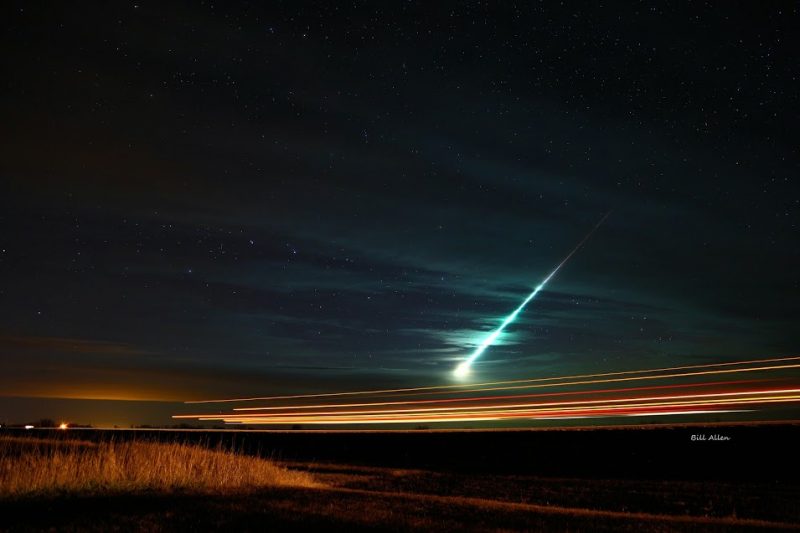 A Taurid fireball – or exceptionally bright meteor – caught during the unusually strong 2015 shower by Bill Allen.

It’s the time of year for the long-lasting Taurid meteor shower. If you glimpse any, think about this. Last year, a team of researchers from the Czech Academy of Sciences in the Czech Republic found evidence to suggest Earth is at greater risk than we thought of being hit by an asteroid associated with these meteors. They identified a new swarm of meteoroids – icy debris in space, left behind by a comet – related to the Taurid meteor stream. More importantly, they said, this new meteoroid stream might also contain still-undiscovered asteroids, some good-sized, say, a few tens of meters (yards) or even larger.

Their study was published in 2017 in the peer-reviewed journal Astronomy & Astrophysics.

Let’s be clear. We are no more in danger of being hit by a space rock from the newly discovered stream of Taurids than we were before scientists discovered it. So there is no imminent danger here. It simply means that scientists will be searching the newly identified streams of meteoroids, with the goal of detecting any medium-sized or even moderately large asteroids with orbits that might bring them near Earth.

What are meteoroids? They’re typically bits of debris in space, often left behind by comets as they orbit the sun. The Taurid meteor shower, for example, is produced by debris of Comet 2P/Encke. When debris from a comet enters our atmosphere, meteoroids vaporize due to friction with the air, leaving streaks of light in our night sky that we call meteors. Sometimes, a random meteor (usually not associated with one of the annual meteor showers) hits the ground, and then its name changes again to meteorite.

There are many comets orbiting the sun, leaving debris behind. As Earth orbits the sun, as our planet encounters these small particles left by comets, we see meteor showers. Some meteoroid streams produce only a few visible meteors, but sometimes Earth passes by a denser swarm of particles, thus causing a more impressive or active meteor shower.

These particles are usually very small, maybe as tiny as sand, or grains of rice, although the sizes do vary. New research suggests some recent Taurid fireballs – or exceptionally bright meteors – were produced by much-larger particles. At least one meteor observed in 2015 had an estimated size of about a meter (3.28 feet). Another very bright meteor – observed in 2015 and recently studied – might have been caused by a space rock 10 times more massive.

The 2015 Taurid shower produced many fireballs, or exceptionally bright meteors. Here’s another one, captured in 2015 by Jeff Dai in Tibet.

The Taurid meteor shower occurs every year, beginning in late October and extending through November. It usually offers only a few bright meteors. However, 2015 was an exceptional year for the Taurids. In November 2015, a network of meteor cameras located in Europe detected about 200 fireballs. Of those, 24 were very bright, and 10 were as bright or even brighter than the full moon.

Bright Taurid meteors were also recorded in Puerto Rico and Thailand, and elsewhere. EarthSky received many photos and videos of the Taurids in 2015.

Since then, astronomers have made an extensive analysis of some of the incoming 2015 Taurids and found that most of the meteors showed a trajectory or orbit that points to the same new branch of meteoroid material. And hence a new meteoroid stream has been found.

Then something else got astronomers’ attention. They realized that some large space rocks, including asteroids 2015 TX24 and 2005 UR, share the same orbits as the newly found swarm of Taurid meteoroids. These asteroids are now assumed to be members of the newly detected meteoroid stream. Asteroid 2015 TX24 – discovered on October 8, 2015 – was closest to Earth 20 days later, on October 28, a date very close to the Taurid meteor shower’s enhanced activity in 2015.

And so it appears likely that the newly discovered meteoroid streams contains other still-undiscovered, but relatively large, space rocks.

Remember, some Taurid meteors encounter Earth’s atmosphere each year. Is it possible that larger objects in the newly found Taurid meteor stream might also encounter Earth? For this reason, astronomers speak of these objects as potentially hazardous. They say the objects would be large enough to cause some regional damage if they were indeed to strike Earth, but – as yet – no asteroid has been identified as threatening or having a collision course with Earth.

Some bright meteors were seen during the enhanced Taurid meteor shower of November 2015, including this impressive meteor seen in Thailand:

Another bright Taurid meteor was captured from the Caribbean by the Sociedad de Astronomia del Caribe:

Bottom line: A new stream of meteoroidal material has been discovered for the Taurids. Some relatively large asteroids are known to be in this same orbit. Could there be potentially hazardous asteroids in the stream as well?

Source: Discovery of a new branch of the Taurid meteoroid stream as a real source of potentially hazardous bodies