Illustrated guide to Venus and Jupiter conjunction in March 2012

Venus and Jupiter are spectacular in March 2012. They’ll be closest in mid-March – and near the moon by the month’s end.

Venus and Jupiter are spectacular in March 2012. They’ll be closest in mid-March – and near the moon by the month’s end.

See all five bright planets in late February and early March 2012, including Venus and Jupiter. In fact, in late February and early March 2012, as Venus and Jupiter continue to pull closer, you’ll also be able to see three other planets in the evening sky – Mercury, Mars and Saturn. Mercury will be at its best around March 4. Mars, in particular, will be extremely spectacular to see – because Earth will fly between Mars and the sun on March 3, 2012. So Mars will be at its closest and brightest for this two-year period in early March! 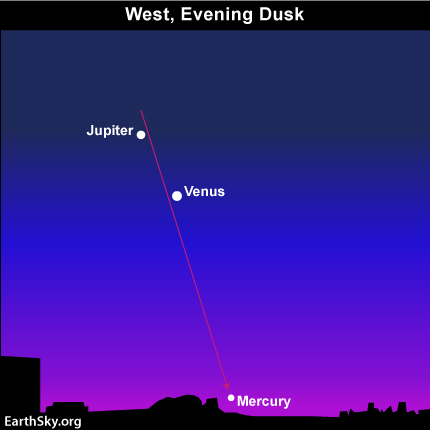 Venus, Jupiter and Mercury on March 4, 2012. These two brightest planets are really getting close now! 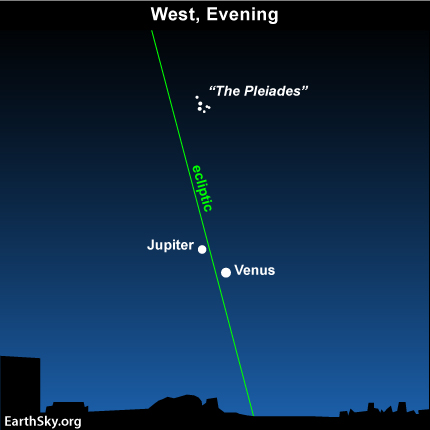 Venus and Jupiter will be at their closest in mid-March 2012. By March 12 and 13, Venus and Jupiter will lie only three degrees apart. Then they’ll be like twin headlight beams shining down on us from the west after sunset. You’ll be able to hide both mighty worlds together behind two outstretched fingertips. 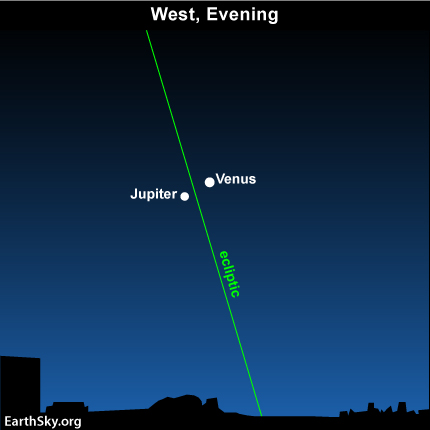 Here are Venus and Jupiter on March 14, 2012. They’ll be at their closest and most spectacular in mid-March.

Don’t miss the moon near Venus and Jupiter in late March, 2012. But the show won’t be over yet. Around March 23, 2012 the young moon will once again return to the evening sky. Especially in the Northern Hemisphere, March is a great month to catch sight of an extremely slender crescent in the day or so after new moon. Start looking for the moon around March 23. Then on March 24 and 25, watch the moon move past Venus and Jupiter again. 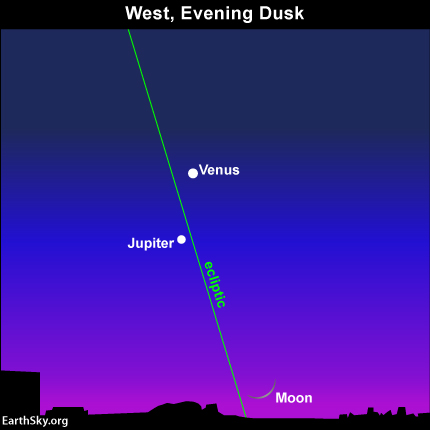 Venus and Jupiter on March 23, 2012, with a very young moon below them. Look immediately after sunset, as soon as the sky shows a trace of darkness. 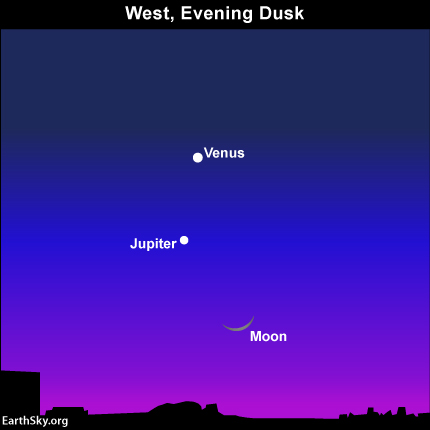 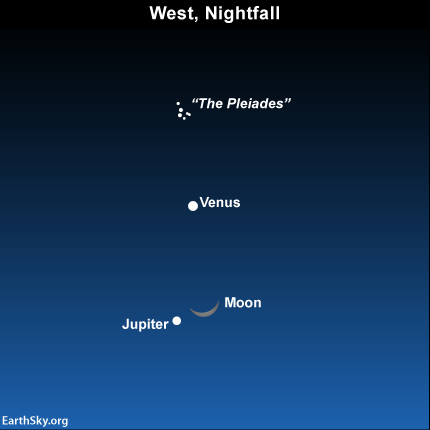 Venus, Jupiter and moon on March 25, 2012. Notice the dipper-shaped Pleiades star cluster above them. 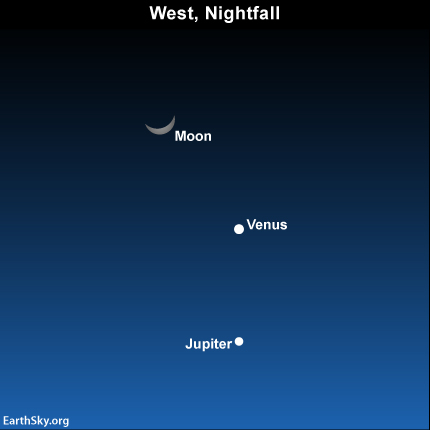 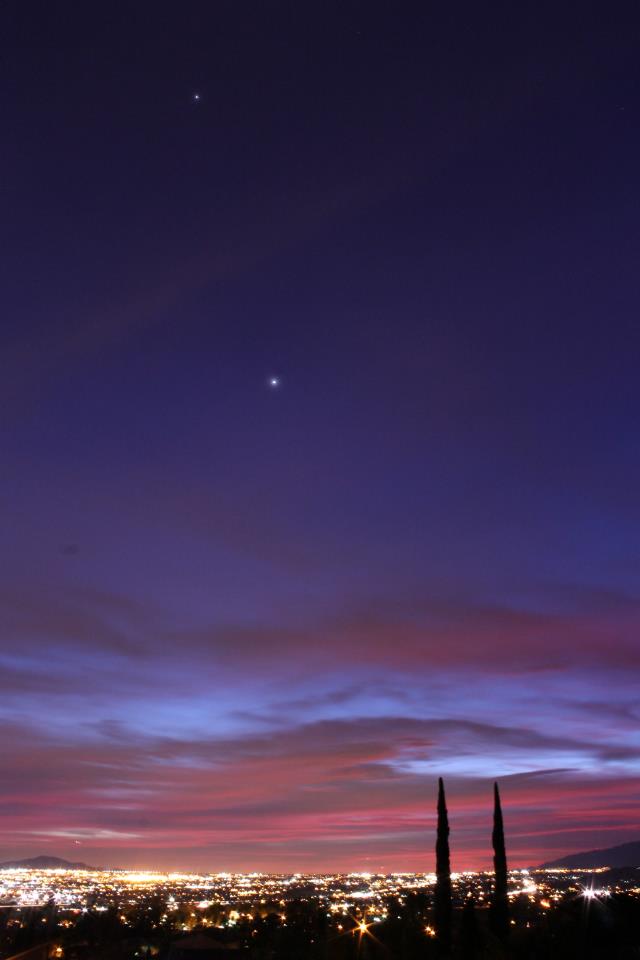 Jupiter, above, and Venus, as seen over Highland, California in mid-February 2012. They can be seen from around the world – from cities, suburbs and rural locations. Just look west after sunset! Image via EarthSky Facebook friend Lyle Evans 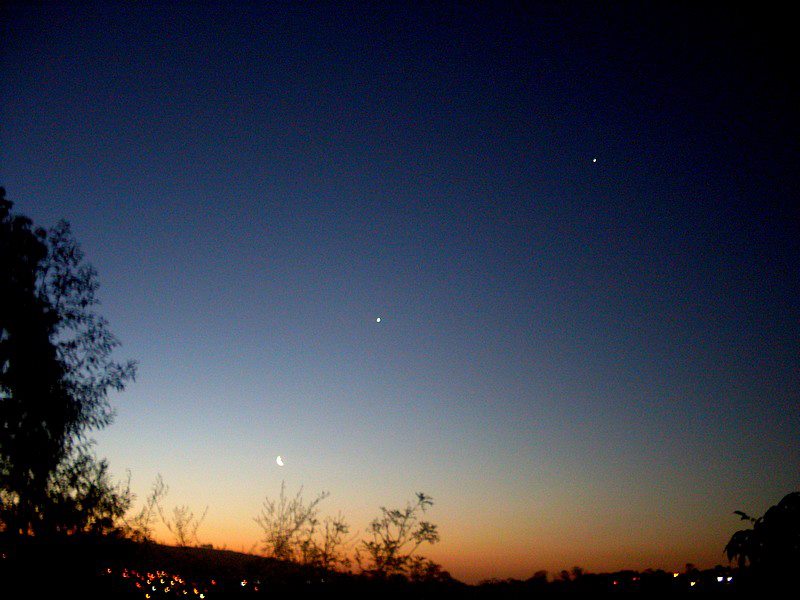 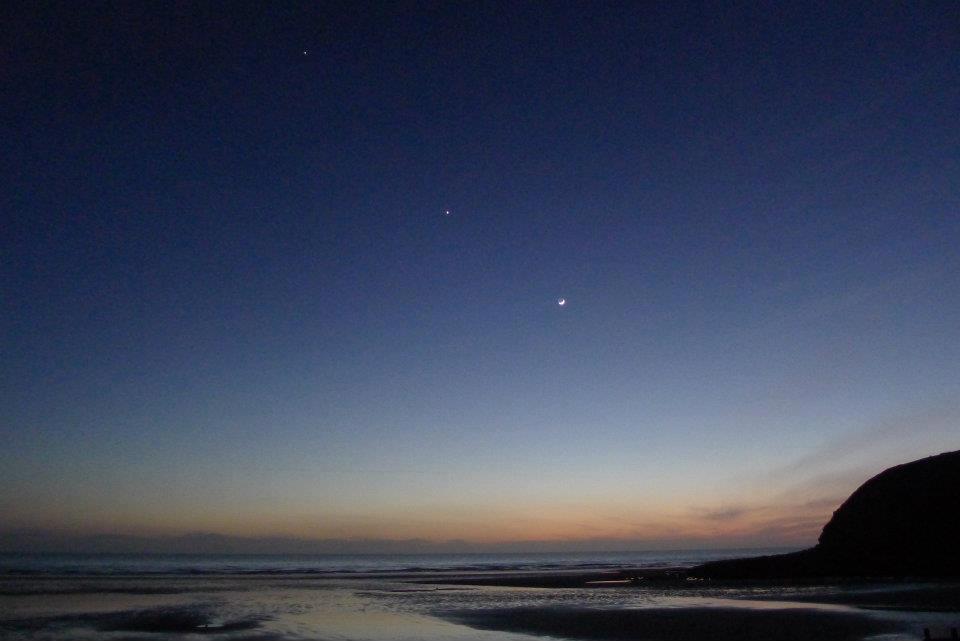