Posted by
Fred Espenak
and

Our moon: The big picture

Lunar and solar eclipses in 2017

NASA animations of moon phases and librations in 2016

Our moon: The big picture. We tend to take the moon for granted but it shares a unique history with Earth. Shortly after its formation 4.5 billion years ago, proto-Earth collided with a Mars-sized object called Theia. Much of proto-Earth and Theia merged to become our Earth, but the impact also ejected a large amount of material into space. Some of it coalesced to become the moon.

The moon’s orbit stabilizes the axial tilt of Earth, preventing it from undergoing chaotic variations that would lead to catastrophic changes in climate. And the daily rise and fall of moon-induced tides has left an indelible imprint on Earth. Some scientists even argue whether life on Earth would be possible without the influence of the moon.

With this big picture in mind, we gain a new appreciation for the moon as we watch its phases, cycles, and motions during 2017.

As the moon orbits Earth, its changing geometry with respect to the sun produces the moon’s characteristic phases (new moon, first quarter, full moon and last quarter). One orbit of the moon relative to the sun (the synodic month) has a mean duration of 29.5306 days (29 days 12 hours 44 minutes). 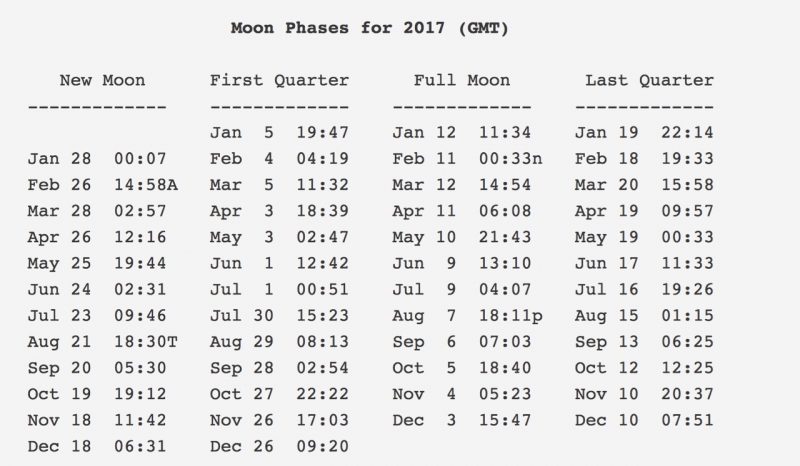 The table above lists the date and time of the moon’s phases throughout 2017. The time of each phase is given in Greenwich Mean Time or GMT (a.k.a. Universal Time or UT). I’ve generated a table of the moon’s phases covering 100 years on AstroPixels.com at Moon’s Phases – 21st Century (GMT).

Click here to convert GMT to other time zones.

Moonrise on 2015 January 05 from Fred Espenak on Vimeo. 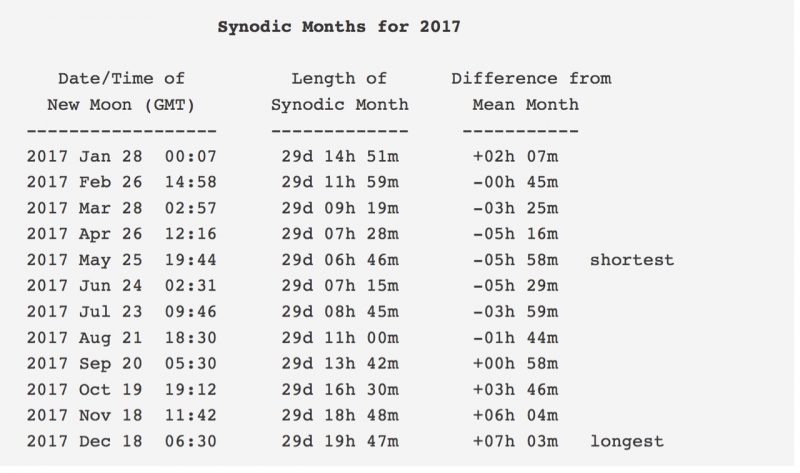 What causes these variations? The explanation involves the moon’s elliptical orbit and its orientation with respect to the sun during any given month. If new moon occurs when the moon is nearest to Earth (perigee), then the synodic month is shorter than normal. On the other hand, if new moon occurs when the moon is farthest from Earth (apogee), then the synodic month is longer than normal. Furthermore, the orientation of the moon’s ellipse-shaped orbit slowly rotates in space with a period of about 18 years. A more detailed discussion on this topic can be found at Moon’s Orbit and the Synodic Month (EclipseWise.com). You can also find the duration of every synodic month this century at Length of the Synodic Month: 2001 to 2100 (AstroPixels.com).

The time it takes for the moon to orbit once with respect to its perigee is known as the anomalistic month. Its average length is 27.55455 days (27 days 13 hours 19 minutes), which is nearly 2 days less than the synodic month. The actual length can vary by several days due to the gravitational effects of the sun on the moon’s elliptical orbit. The table below gives the date and time of every perigee and apogee of the moon during 2017. The moon’s distance (in kilometers) is also given. The ‘m’ or ‘M’ appearing next to a date indicates the minimum or maximum distance, respectively, for the year. A table listing details of every perigee and apogee this century can be found at Perigee and Apogee: 2001 to 2100 (AstroPixels.com) 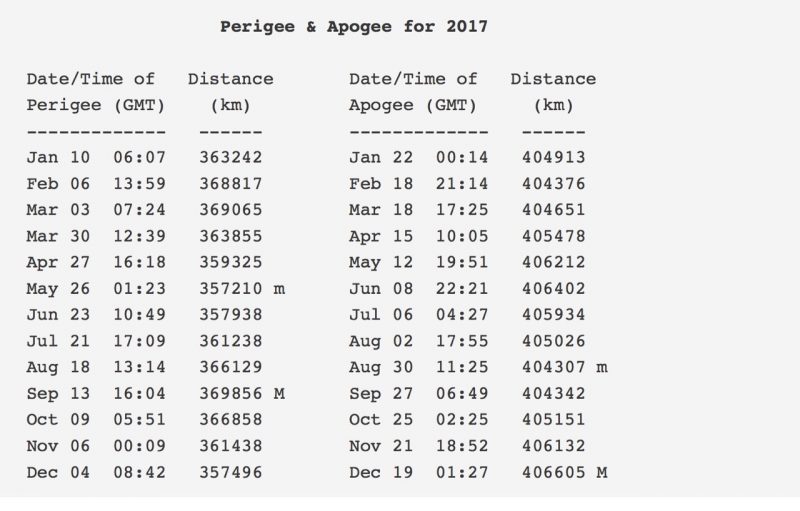 Because the moon orbits Earth in about 29.5 days with respect to the sun, its daily motion against the background stars and constellations is quite rapid. It averages 12.2° per day. A table giving the moon’s daily celestial coordinates throughout the year can be found at Moon Ephemeris for 2017 (AstroPixels.com). This table lists a lot of other details about the moon including its daily distance, apparent size, libration, phase age (days since new moon) and the phase illumination fraction.

When a full moon occurs within 90% of the moon’s closest approach to Earth in a given orbit, it is called a perigean full moon or more commonly a supermoon. The full moon then appears especially big and bright because it subtends its largest apparent diameter as seen from Earth. The table below lists the perigean full moons (supermoons) occurring in 2017.

The relative distance listed in the supermoon table expresses the moon’s distance as a fraction between apogee (0.0) and perigee (1.0). For more information on supermoons and a complete list of them for this century, see Full Moon at Perigee (Super Moon): 2001 to 2100 (AstroPixels.com).

Besides its obvious phases, the moon also undergoes some additional extremes in its orbit including: Perigee and Apogee, Ascending/Descending Nodes, and Lunar Standstills. Each of these AstroPixels links covers lunar phenomena for the entire 21st Century.

What discussion of the moon would be complete without mentioning eclipses in 2017?

There are two eclipses of the moon. The first is a deep penumbral eclipse on February 11, which is visible from both the Eastern and Western Hemispheres. Penumbral eclipses are rather subtle events and often transpire without any notice (see: Visual Appearance of Penumbral Lunar Eclipses). The second lunar eclipse is partial on August 7 and is visible from the Eastern Hemisphere.

There are also two solar eclipses in 2017. The first is an annular eclipse on February 26. The annular phase of the eclipse is visible from Chile, Argentina, the south Atlantic, Angola, Democratic Republic of the Congo, and Zambia.

For more details on all these events, see Eclipses During 2017 (EclipseWise.com).

Watching the moon’s phases wax and wane as well as the occasional lunar eclipse can best be enjoyed with the naked eye and binoculars. And you don’t even need a dark sky since the moon is easily visible from the heart of brightly lit cities.

One of the first projects I tackled upon completing Bifrost Observatory in 2010 was to photograph the moon’s phases every day for a complete month. Of course, the weather doesn’t always cooperate (even from sunny Arizona) so it actually took several months to complete the project. You can see the results at the Moon Phases Gallery. Clicking on any of the thumbnails pictures will give you an enlarged image with complete technical details. You can also visit Moon Phases Mosaics to see composites showing the moon’s phases over a complete synodic month.

NASA animations of moon phases and librations in 2017:

The NASA/Goddard Scientific Visualization Studio has used image data from the Lunar Reconnaissance Orbiter (LRO) mission to create clever animations of the moon’s ever changing phases and librations in 2017. The example above illustrates the moon’s phase and libration at hourly intervals throughout 2017. Each frame represents one hour.

Besides presenting the moon’s phase and apparent size, these videos show the moon’s orbit position, sub-Earth and subsolar points, distance from the Earth at true scale, and labels of craters near the terminator. As the moon orbits Earth, it appears to wobble and tip on its axis. This motion is called libration and it allows us to see about 59% of the moon’s surface (see Libration (EarthSky). The major cause of libration is due to our changing line of sight because of the moon’s elliptical orbit.

Dial-A-Moon. Ernie Wright of the NASA Scientific Visualization Studio has also used LRO data to create a web tool called Dial-A-Moon. Enter the month, day and hour and Dial-A-Moon will generate a visualization of the moon showing the correct phase and libration for that instant during 2016 (see Moon Phase and Libration, 201y).

Thank you! Your submission has been received!
Oops! Something went wrong while submitting the form.
END_OF_DOCUMENT_TOKEN_TO_BE_REPLACED

What to look for in a total solar eclipse

The story behind the 2017 eclipse stamp