Top tips for watching the Perseids in 2020

On the expected peak mornings of 2020’s Perseid meteor shower – August 11, 12 and 13 – a waning moon will be shining, too. Here’s how to minimize the moon and optimize the Perseids. 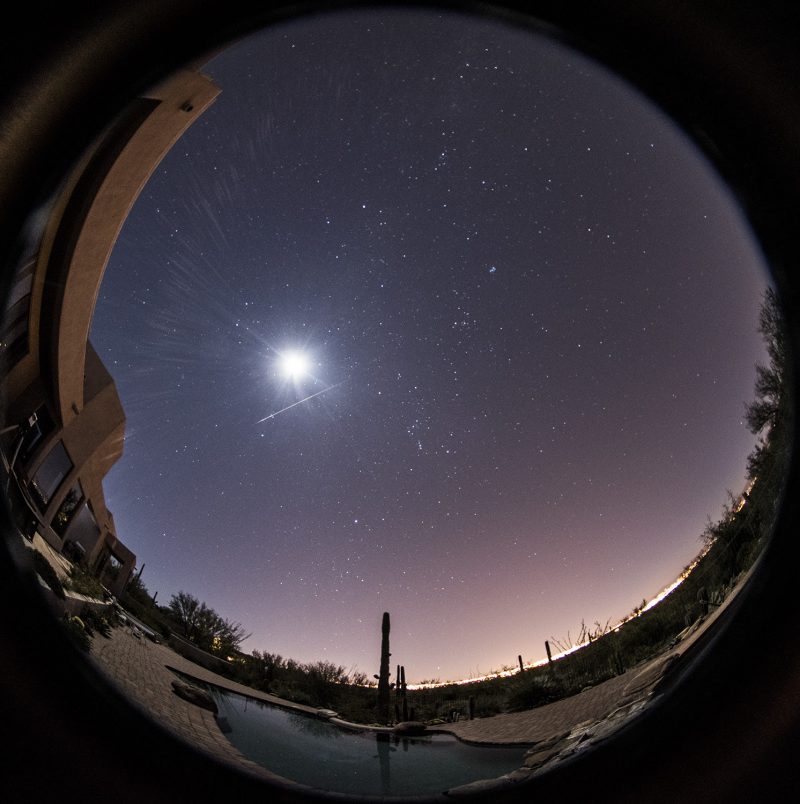 Moonlit meteor, November 1, 2015, via Eliot Herman in Tucson, Arizona. He wrote: “I have 2 rules for meteors: avoid the moon, if possible, and if not embrace the situation. Make the adjustments and accept that, while the photos probably won’t be epic, it’s possible to record the good ones. The moon isn’t so bad. Clouds are …”

On the expected peak mornings of August 11, 12 and 13, the Perseid meteor shower will be somewhat marred by the light of the waning moon. Check out the custom calendar at Sunrise Sunset Calendars, being sure to check the moonrise/moonset box, to get the exact time of moonrise at your location. Otherwise, here’s how to minimize the moon and optimize the 2020 Perseids.

1. Watch during the mid-to-late evening hours on August 10, 11 and 12, before moonrise. Take that, moon! You won’t see as many meteors as at the peak morning hours before dawn. But you will see some meteors! Moreover, the evening hours are more likely to present an earthgrazer: a long, slow, colorful meteor traveling horizontally across the evening sky.

2. Sprawl out in a moon shadow. If you plan to watch the Perseids in the light of the moon, notice that the moon casts shadows. Find a moon shadow somewhere that still provides you with a wide expanse of sky for meteor-viewing. A plateau area with high-standing mountains to block out the moon would work just fine. If you can’t do that, find a hedgerow of trees bordering a wide open field somewhere (though obtain permission, if it’s private land). Or simply sit in the shadow of a barn or other building. Ensconced within a moon shadow, and far from the glow of city lights, the night all of a sudden darkens while the meteors brighten.

3. Avoid city lights. This should go without saying, but just a reminder. A wide open area – a field or a lonely country road – is best if you’re serious about watching meteors. Visit EarthSky’s Best Places to Stargaze to find a dark location near you.

4. Watch with a friend or friends, and try facing in different directions so that if someone sees a meteor, that person can call out “Meteor!” to the rest.

5. Notice the speed and colors, if any, of the meteors.

6. Watch for meteor trains. A meteor train is a persistent glow in the air, left by some meteors after they have faded from view. Trains are caused by luminous ionized matter left in the wake of this incoming space debris. Hard to see in the moonlight, but watch for them!

7. Embrace the moon. We hear people bubble with excitement about seeing meteors in all sorts of conditions – moon or no moon – city lights or no city lights. And so, this week, try taking your lawn chair or blanket to a wide open location and bask in the moon’s bright light. You’ll see an occasional meteor streak by. It’ll be beautiful! 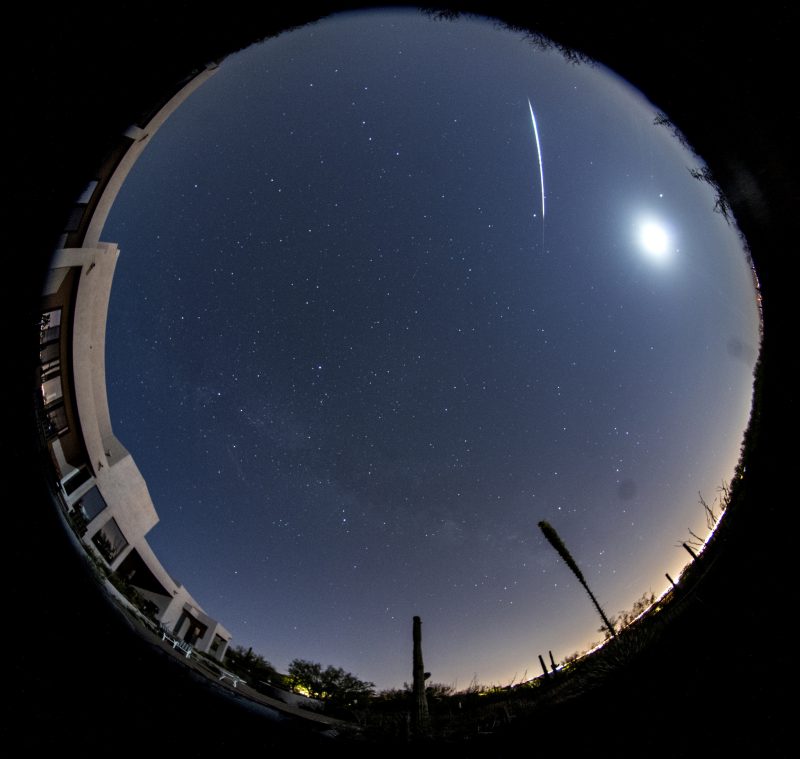 Eliot Herman in Tucson caught this image, as well as the image at the top of this post. He said this one – from early July 2017 – is one of the the brightest meteors he caught in 2017, despite the moon. When we asked him for tips for shooting meteors in bright moonlight, he answered: “I shoot my images so that it is bright i.e. ISO 2500 at F5 for 15 sec in RAW (this is critical) at 8 mm fisheye. Using the RAW images in Photoshop, I adjust the white balance to look like the sky color, and then adjust saturation, gamma, exposure, and levels until the stars appear against a background that looks closer to reality. It’s not difficult to do this, takes just a few minutes to process one image. There are aspects like moonlight reflections that one has to live with. I do not mask or otherwise hide anything, although that can be done with in Photoshop. But I like my images to be real, so no subtractions. Meteors at +2 magnitude can easily be seen even in full moonlight. In dark skies, I shoot ISO 3200 F 3.5 for 15 seconds, and it is, of course, much better.”

Bottom line: The waning moon will do its best to drown out the 2019 Perseid meteor shower. Here are 7 tips for enjoying the moonlit Perseids in 2020.