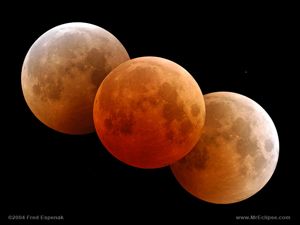 A total lunar eclipse will take place on the night of December 20-21, 2010, for us in the Americas, islands of the Pacific, Greenland, northwestern Europe and northwestern Africa. If you are west of the International Date Line, your calendar says December 21 today, but this eclipse still might be visible for you. For more about specific times and time zones, click here.

A total lunar eclipse takes place whenever the moon passes right through the Earth’s dark umbral shadow. This can only happen at full moon, which is when the moon has swung directly opposite the sun in our sky, and when the fully illuminated hemisphere of the moon (day side) shines brightly in our night sky. There is a full moon every month. But – several times each year – the Earth, sun and moon line up exactly. Then the body of the moon may pass in front of the sun, creating a solar eclipse. Or – as on the night of December 20/21 – the Earth passes in front of the sun as seen from the moon. At such times, Earth’s shadow falls on the moon’s face.

To the best of our knowledge, the last time the December solstice and a total lunar eclipse coincided on the same date was 372 years ago, on December 21, 1638. By the way, that 372-year period of time is known as the Gregoriana eclipse cycle.

Tonight’s eclipse is special for falling close to the December solstice. It is the northernmost total lunar eclipse until December 21, 2485.

During the December 20/21 total lunar eclipse, the moon will be totally immersed in Earth’s shadow for 72 minutes. A partial eclipse lasting for nearly the same period of time will precede and follow the total eclipse. No special equipment needed to watch this solstice eclipse, although binoculars or a telescope will enhance the view. Just wrap up warmly and enjoy.

Thank you! Your submission has been received!
Oops! Something went wrong while submitting the form.
END_OF_DOCUMENT_TOKEN_TO_BE_REPLACED