What is interstellar space?

You might be surprised to learn that interstellar space isn’t just vacuum. It’s full of gases, elements, and dust – very thinly spread, to be sure – but the building blocks of stars and planets. 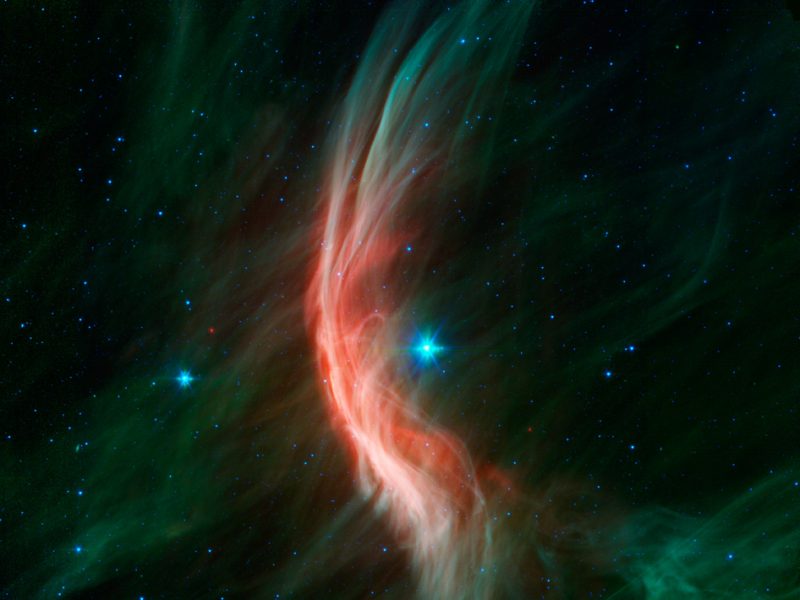 In this infrared image from NASA’s Spitzer Space Telescope, winds flowing out from a fast-moving star (Zeta Ophiuchi) are making ripples in the dust in interstellar space. Image via NASA.

Interstellar space – the space between the stars – isn’t just empty space. There’s a lot of “stuff” out there, including hydrogen (70%) and helium (28%), formed in the Big Bang that set our universe into motion. The other 2% of “stuff” in interstellar space is heavier gases and dust, consisting of the other elements made inside stars and spewed into space by supernovae. The material in interstellar space is very spread out. It’s denser in some places than in others, but a typical density is about one atom per cubic centimeter. Still, even the most dense regions of interstellar space count as vacuum, compared with our earthly air.

Our sun controls the conditions around our solar system, but outside of that is interstellar space and all that it contains.

Astronomers call this space between the stars the interstellar medium. 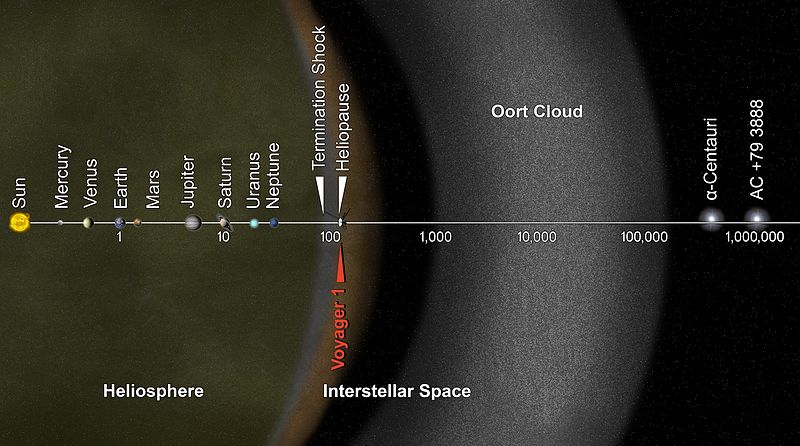 Diagram of the solar system showing planets, heliopause, and interstellar space. The numbers shown are astronomical units (AU), where 1 AU is the distance between the sun and the Earth. Image via NASA/ JPL-Caltech.

Most of the interstellar medium is composed of hydrogen and helium – interstellar gas – but about 2% is heavier elements and dust. Image via University of New Hampshire Experimental Space Plasma Group.

Why is interstellar space important?

The interstellar medium is where stars are made. Without it, we wouldn’t exist. If there weren’t thick and thin spots that condensed into thicker patches that eventually became stars, the whole universe would just be a cloud of boring, cold, lifeless gas.

The thick parts of the interstellar medium are called molecular clouds – often referred to as stellar nurseries – the places where stars are born. The first stars didn’t have planets because there weren’t any materials in interstellar space beyond hydrogen and helium. But, over the billions of years of our universe’s history, that has changed.

It changed because stars themselves make increasingly more complex elements in their interiors. When the most massive stars grow old and die, they explode as supernovae, releasing their elements into interstellar space. Thus it has become possible for stars to form with planets and for at least one planet we know of, Earth, to harbor living things.

Given the contents of interstellar space, and process by which stars and planets are born, it seems highly likely that other planets have living things, too. 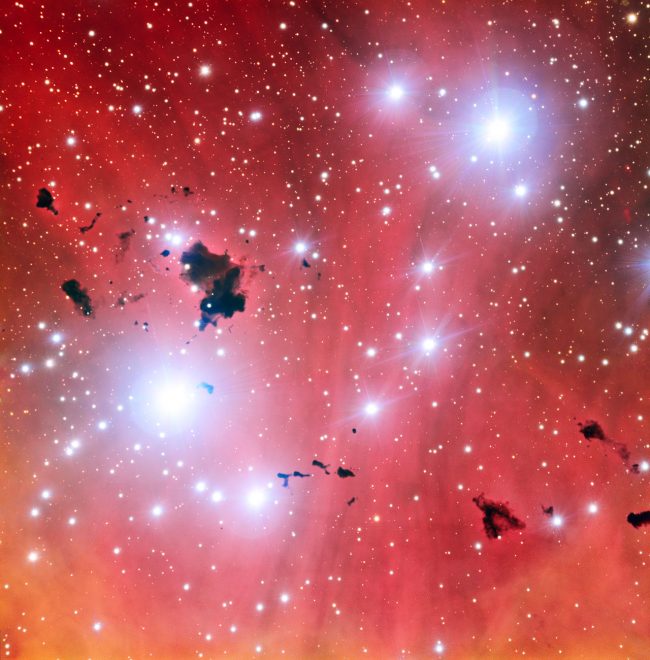 This intriguing view of spectacular stellar nursery IC 2944 was released to celebrate a milestone: 15 years of ESO’s Very Large Telescope. This image also shows a group of thick clouds of dust – known as the Thackeray globules – silhouetted against the pale pink glowing gas of the nebula.

Our solar system, and spacecraft, in interstellar space

The sun is our local star. It’s about 870,000 miles (1.4 million km) across, approximately 100 times wider in diameter than our planet Earth. It would take more than 965,000 Earths to fill up the volume of the sun. Earth is one of the smaller planets in our solar system.

The edge of the heliosphere is four times as far, at about 120 AU. 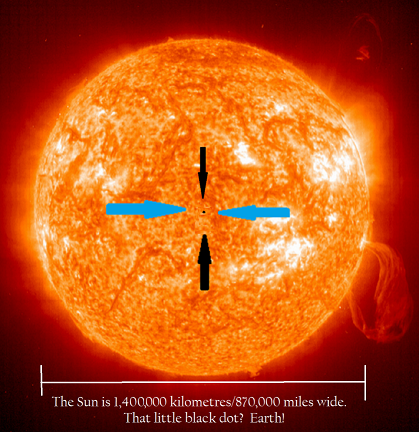 A comparison of the size of Earth and the sun. Image via SFWriter @Fiverr. 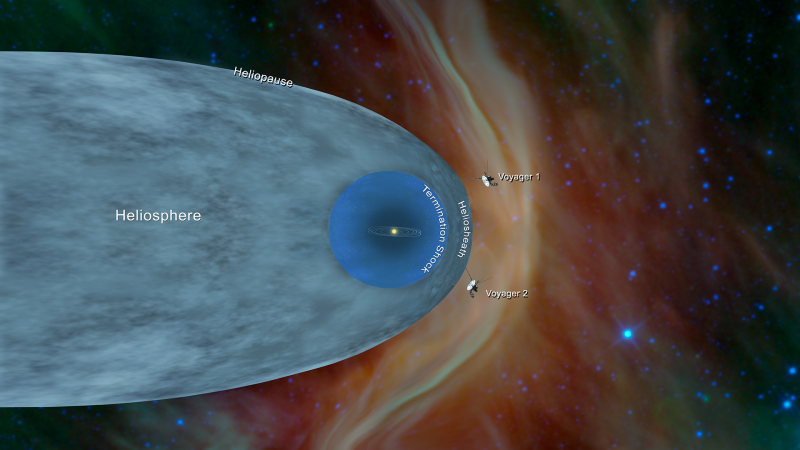 Presumably, every star creates its own bubble around itself. At the edges of all these billions of “heliospheres,” stars leak particles and electromagnetic radiation into space, further feeding the interstellar medium.

Once you have traveled past the inner edge of the heliosphere, there is a region called the termination shock that is like white-water rapids in a stream.

About that “vacuum” of space …

When we talk about space, we often think of vacuum where there is absolutely nothing for us to breathe. Earth’s atmosphere is quite thick at sea level. It extends well above the International Space Station (ISS), but it is so thin that after a few hundred kilometers, it’s almost as if it isn’t there. Earth’s atmosphere may finally end around 6,700 miles (10,800 km) above Earth’s surface, or higher, depending on whom you ask. 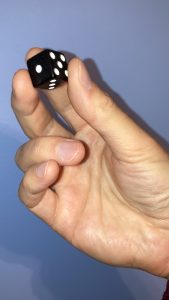 This die has a side of 1.5 cm, so it is a little bit larger than what holds 3 x 10^19 molecules of air at sea level, or 1 atom in interstellar space. Image via T. Wiegert.

At Mount Everest’s peak there are is a bit more than 10^18 molecules in the same volume, and, at the altitude of ISS (~350 km or a little over 200 miles up), there are only 1 million (10^6) molecules per cubic centimeter – and the same for the thin atmosphere of the moon.

In comparison, interstellar space only has about 1 atom per cubic centimeter on average, although this number varies from 100,000 to as low as 0.01 depending on if you’re in  a molecular cloud or in the space in between the clouds. Either way it’s about as close to an absolute vacuum as you can get (not counting intergalactic space where the number is even lower …). 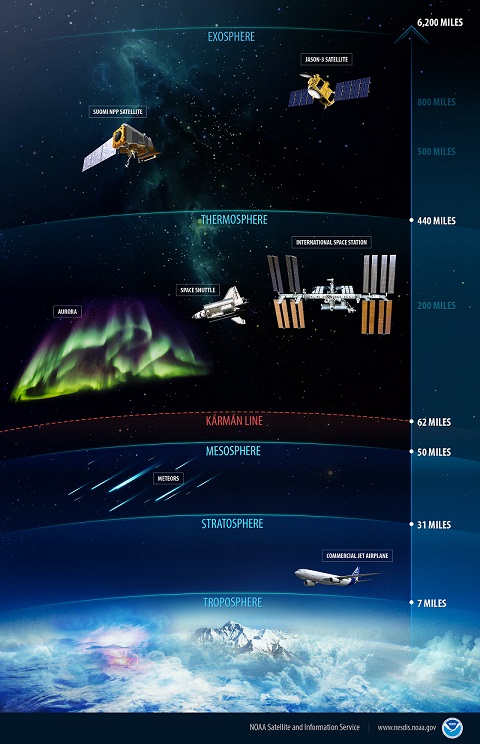 The layers of Earth’s atmosphere. Graphic via NOAA.

Bottom line: Interstellar space is the space between the stars in a galaxy. It’s not “empty,” but, overall, it’s as close to an absolute vacuum as you can get. Molecular clouds are places in interstellar space where the material is collected most densely. Within these clouds, new stars and planets are born.