Before and after pics of new crater on Mars

On or about March 27, 2012, an asteroid must have struck Mars to create a new 50-meter-wide crater. NASA pinned down the date with a spacecraft orbiting Mars. 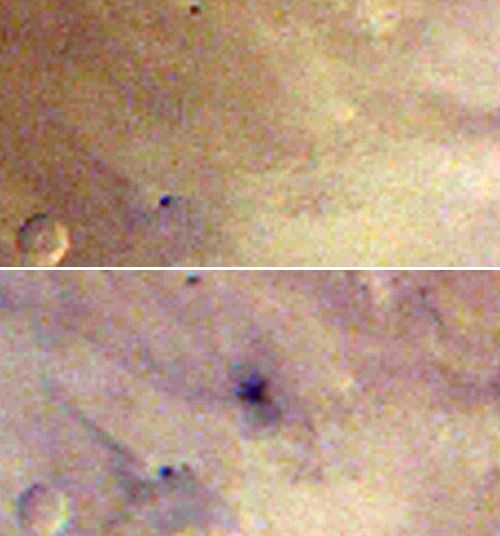 Now you don’t see it … now you do. The image at top was acquired March 27, 2012. The one on the bottom was the next day, March 28. Big crater! Image via NASA/JPL-Caltech/MSSS

NASA’s Mars Reconnaissance Orbiter (MRO) – which has been orbiting Mars since 2006 – took the before-and-after images above of a new crater on our neighboring planet Mars. It captured the before image (top) on March 27, 2012, and the after image (bottom) the next day, March 28. Sometime on or about March 27, 2012, then, an asteroid must have struck Mars to create this 50-meter-wide crater!

JPL put together the video below, explaining how scientists noticed this crater and pinned down the date of the impact needed to create it.

NASA says it has confirmed about 400 fresh impact craters on Mars using orbiting spacecraft, and before-and-after imaging. This is the first time, though, that they’ve been able to pin down the time of impact to such a small time window – only one day! At 50 meters across, it’s also the largest crater in the solar system ever seen with before and after shots.

How large a body impacting Mars would be needed to make a crater this size? On his blog on Slate.com, Phil Plait says “several meters” and points out:

Something that small would burn up in Earth’s atmosphere, but Mars has a much thinner atmosphere, about 1% as thick of Earth’s, so it can’t stop rocks that size. They make it to the ground, hitting hard enough to carve out a hole and blast out ejecta debris — which was how the crater was found.

I can’t help but wonder, what would Percival Lowell have thought? He spent some 15 years around the turn of the 20th century studying Mars intensively through telescopes and formulating the long-lasting (but ultimately false) idea that Mars had ancient, artificial canals indicating a lost, intelligent race of Martians. That’s a substantial part of the lifetime of one of history’s most dedicated Mars observers … whose ideas could have been overturned by NASA’s orbiting MRO in perhaps only a few moments of observation. 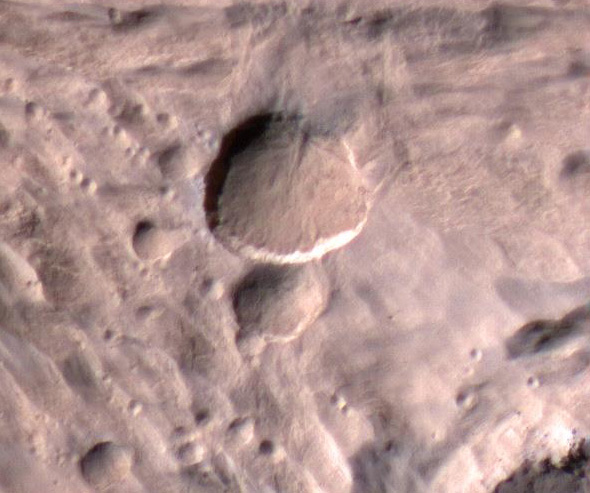 Close-up of new Mars crater. Image via NASA/JPL-Caltech/University of Arizona

Bottom line: Mars has a new crater, and a spacecraft in orbit around Mars caught its image on two consecutive days in 2012.