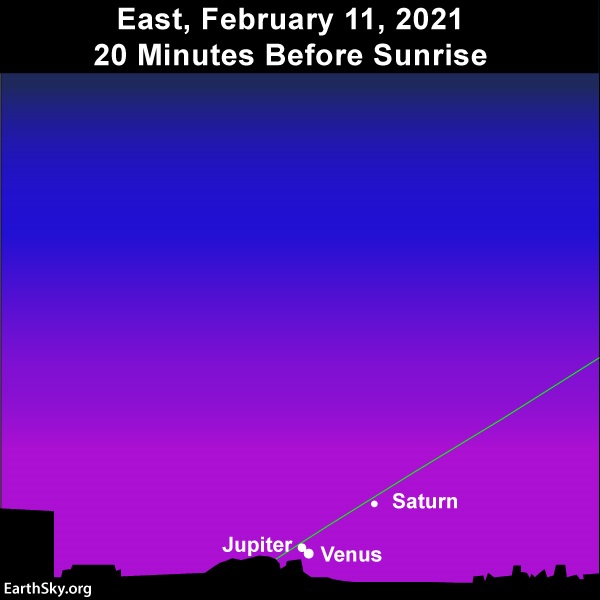 Are you an early riser? Depending on where you live worldwide, the planets Venus and Jupiter will pair up most closely in the morning sky on February 11 or 12, 2021. Although Venus and Jupiter rank as the third-brightest and fourth-brightest celestial bodies in all the heavens, respectively, after the sun and moon, their furtive rendezvous might elude detection in the morning twilight from mid-and-far northern latitudes. Plus, we give you warning: the conjunction will probably be much less obvious in the real sky than on our sky chart!

If you see only one bright starlike object, it’s most likely Venus, which outshines Jupiter by about six times. Do you have binoculars? If so, aim them at Venus to gaze at Jupiter snuggling up with Venus inside a single binocular field of view. At their conjunction, these two worlds will only be 0.4 degrees apart on the sky’s dome. (For reference, the moon’s angular diameter spans about 0.5 degree of sky.)

We give you fair warning. The Southern Hemisphere enjoys a big advantage for viewing this spectacularly close conjunction, and northerly latitudes may well miss out altogether (even if using an optical aid).

We give you the approximate rising times for Venus and nearby Jupiter, at various latitudes (given an absolutely level horizon): 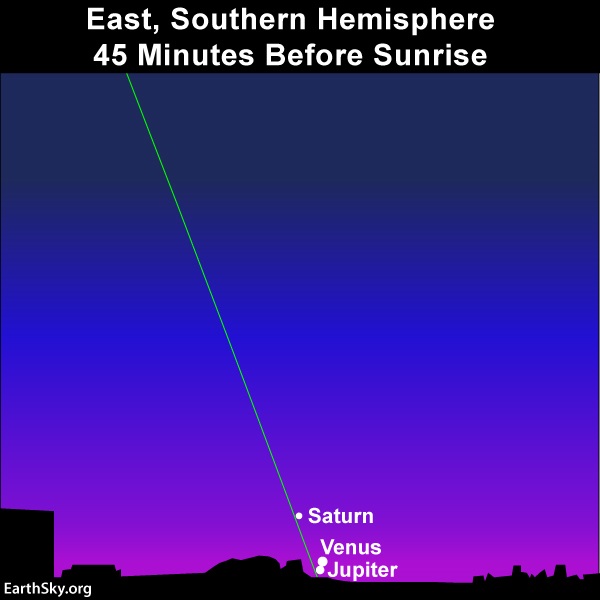 Bottome line: You may be able to see Venus and Jupiter pair up in a conjunction at dawn on February 11, 2021. Southern Hemisphere sky watchers have the advantage.