On August 6, 2014, the moon shines by the Teapot asterism in the constellation Sagittarius. The Teapot lies in the general direction of the galactic center. 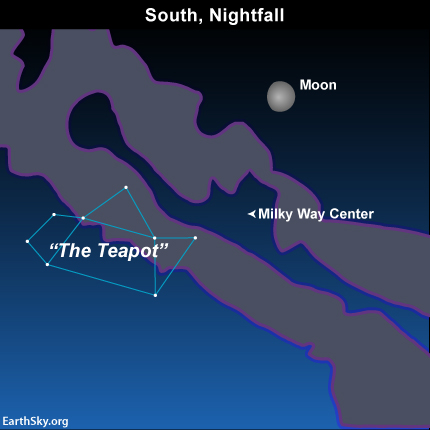 When is the best month to view the galactic center?

The answer depends on what time of night you’re looking. But assuming you’re looking in the evening, August and September present grand months for gazing toward the famous Teapot asterism in the constellation Sagittarius the Archer – and imagining the center of our Milky Way galaxy. The center of the Milky Way is located in the direction of this constellation, as seen from Earth.

Tonight – August 6, 2014 – the moon shines north (above, as seen from the Northern Hemisphere) of the Teapot asterism in Sagittarius. In other words, as you gaze at tonight’s moon, you are gazing toward the heart of our Milky Way galaxy.

Video: Zoom to the center of the Milky Way

It will be difficult to see the Teapot asterism in the moonlight tonight. In fact, to see it best, you’ll want to dark country sky, free of city lights or moonlight. But you can note the location of the moon at a particular time tonight – and come back in a week at that approximate same time, once the moon has left the evening sky – and the Teapot should be there. Just don’t wait too many weeks before making this observation – because, as Earth moves around the sun, the night sky continually shifts westward.

Or here’s another way to find the Teapot. If you are familiar with the famous Summer Triangle asterism, you can star-hop to the Teapot by drawing an imaginary line from star Deneb through the star Altair, and by extending this imaginary line about twice the Deneb/Altair distance.

Teapot of Sagittarius: In direction of the galaxy’s center 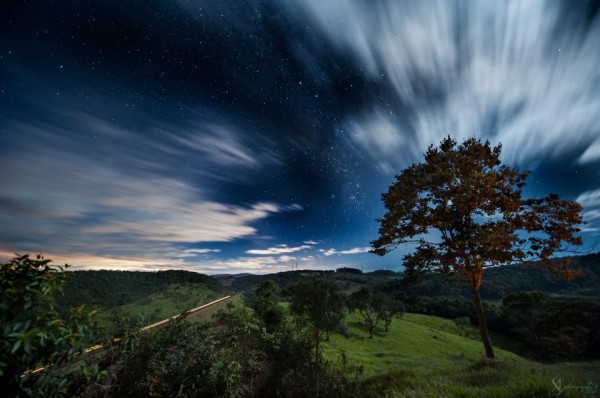 Try finding the Teapot’s location in the sky tonight. Then star-hop to the Teapot again on a dark night, so you can locate the great haze of stars in the direction of the galactic center. Many clusters of stars and nebulae can be seen with binoculars or telescopes in this region of the sky on a dark night. 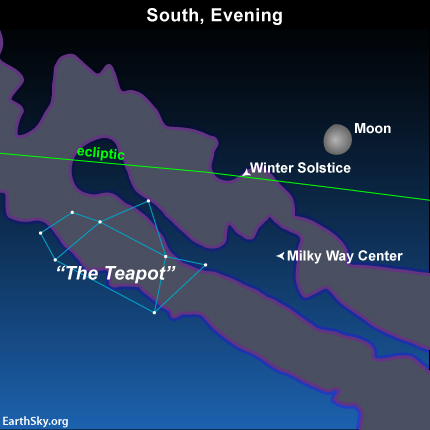 The bright moon will make the Teapot and the boulevard of stars that we call the Milky Way difficult, if not impossible, to view tonight. But look again, starting around mid-August, or when the moon drops out of the evening sky. What is the ecliptic?

And, although we can’t see directly into the heart of the galaxy (there’s too much gas and dust in the way), it’s possible to imagine making a journey of 30,000 light-years to the galaxy’s core. If we did that – according to modern-day astronomers – we would encounter the black hole at the galaxy’s heart.

Bottom line: On the night of August 6, 2014, the bright waxing gibbous moon aligns with the general direction of the center of the Milky Way galaxy tonight. But it’s best to view this star-rich section of the sky on a dark, moonless night!