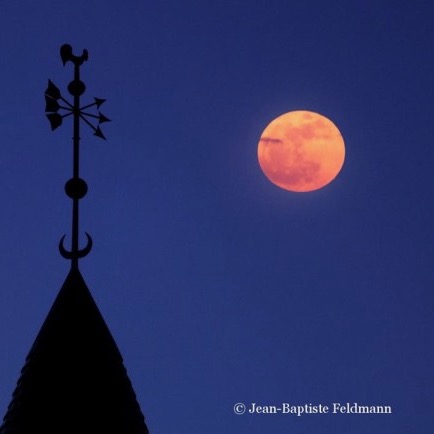 Here are the distances (as measured between the centers of the moon and Earth) for the three upcoming full moon supermoons: 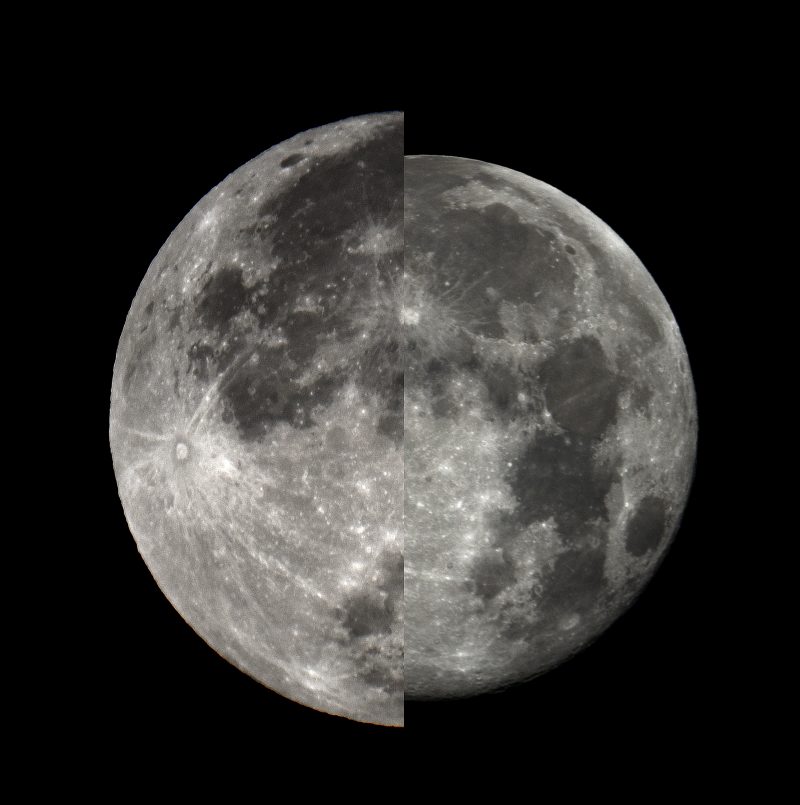 Eliot Herman in Tucson also compared the June full moon with the November 2016 supermoon. He wrote: “A comparison of the closest supermoon since 1948 on November 14, 2016, with farthest mini-moon on June 9, 2017. Both images captured with a Questar telescope and a Nikon D800 camera. The images were combined with Photoshop.”

In North and South America, the moon will turn full during the daylight hours on March 9, when the moon is beneath the horizon. All full moons are opposite the sun, and any moon at the vicinity of full moon looks more or less full for a couple of nights. So watch for a bright full-looking moon to light up the night sky from dusk until dawn on both March 8 and 9.

Visit Sunrise Sunset Calendars to find out when the moon turns full in your time zone. Be sure to check the moon phase box.

This is also the closest full moon to the March equinox, which falls on March 19 or 20, 2020, depending on your time zone. It’s the spring equinox for us in the Northern Hemisphere, but the autumn equinox south of the equator. Thus, for the Southern Hemisphere, this March full moon is the Harvest Moon, famous for ushering in a succession of moonlit nights in the season of waning daylight.

Any full moon rises at or around sunset, and rises an average of 50 minutes later with each passing day. Around the time of the Harvest Moon, the lag time between successive moonrises is reduced to a yearly minimum. For instance, at and around 40 degrees south latitude, the moon is now rising some 30 to 35 minutes (instead of 50 minutes) later daily for the next several days.

Meanwhile, in the Northern Hemisphere, this March full moon is the closest full moon to the spring equinox. Hence, the lag time between successive moonrises reaches a yearly maximum with any near-spring equinox full moon. For instance, at 40 degrees north latitude, the moon is now rising some 75 minutes (rather than 50 minutes) later daily.

The converse holds true for moonset. The moon – on the average – sets some 50 minutes later daily. At present, however, the lag time between successive moonsets is at maximum for the Southern Hemisphere, yet at a minimum in the Northern Hemisphere. At 40 degrees south latitude, the moon now sets around 75 minutes (instead of 50 minutes) later daily; whereas at 40 degrees north latitude, the moon now sets some 30 to 35 minutes (not 50 minutes) later.

Before the advent of artificial lighting, our ancestors must have been well aware of these seasonal vagaries of the wayward moon. 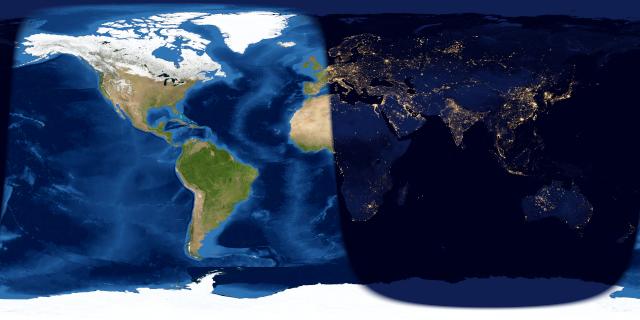 The day and night sides of Earth at the instant of full moon (March 9, 2020, at 17:48 Universal Time). The shadow line running through Europe and Africa depicts sunset. Image via EarthView.

Bottom line: The whole globe enjoys a full-looking moon on March 8 and 9, 2020. The exact time of full moon falls during the day on March 9 for clocks in the Americas. It’s the first supermoon of 2020 and second-closest full moon this year. No matter where you live worldwide, watch for the full moon from dusk until dawn.