Did you see these planets late Sunday night or Monday morning? Tonight, you’ll see the moon closer to Saturn. Bright Antares is nearby. 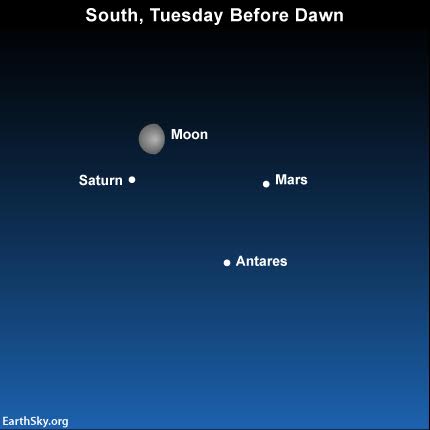 Late night Sunday and before dawn Monday morning, the moon was close to Mars on the sky’s dome. Late night tonight – and before dawn on March 29, 2016 – expect to see this lovely waning gibbous moon closer to the planet Saturn and star Antares, brightest light in constellation Scorpius the Scorpion.

Mars is the brightest of the three starlike objects, and you’ll have no trouble spotting it. If you don’t already know Antares, whose location within the constellation Scorpius makes it very noticeable, you can distinguish Saturn from Antares by color. Saturn shines steadily with a golden hue, while Antares sparkles more and appears redder in color.

If the bright moon makes it hard to discern color, try looking with binoculars.

Mars, Saturn and Antares will make a triangle in our sky for months to come.

Why Mars is bright, sometimes 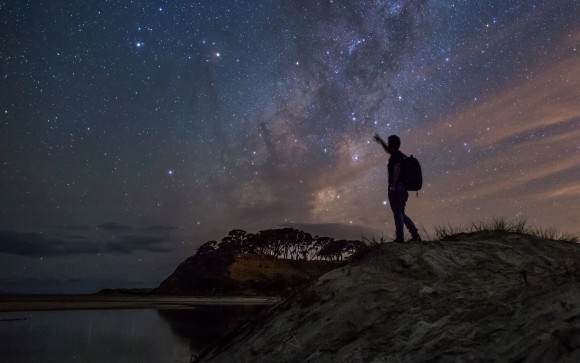 View larger. | Saturn (left) and Antares are the two brightest objects in this self-portrait from Amit Kamble, taken in March, 2015. You can also see the starry band of the Milky Way in this part of the sky. Amit was in Pakiri, an area being developed as a regional park near Auckland, New Zealand. Thank you, Amit! 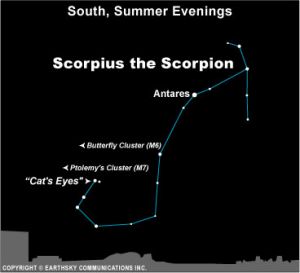 For us in the N. Hemisphere, this constellation is visible in the south on summer evenings, or ascending in the east before dawn on March mornings.

And what of Antares, the bright star near the planets?

This bright red star is considered the Scorpion’s ruby heart. It’s a red supergiant star, located roughly opposite in the sky from another famous red supergiant star, Betelgeuse in the constellation Orion the Hunter. In skyline, it’s said that the Scorpion and the Hunter never appear in the sky at the same time. And indeed … they don’t! As a rule of thumb, when you see Antares in the sky, Betelgeuse will be below the horizon. Why? Simply because these two stars are located on opposite sides of Earth in the grand space of our Milky Way galaxy.

Both Antares and Betelgeuse are near the end of their lifetimes. Massive supergiant red stars are expected to explode as supernovae. The supernova could happen tomorrow or millions of years in the future. Astronomers don’t really know for sure. These stars are far enough from us (hundreds of light-years) that the deadly radiation probably won’t harm Earth.

Antares is truly an enormous star, with a radius in excess of 3 Astronomical Units (AU). One AU is the Earth’s average distance from the sun. If by some bit of magic Antares was suddenly substituted for our sun, the surface of the star would extend well past the orbit of Mars! 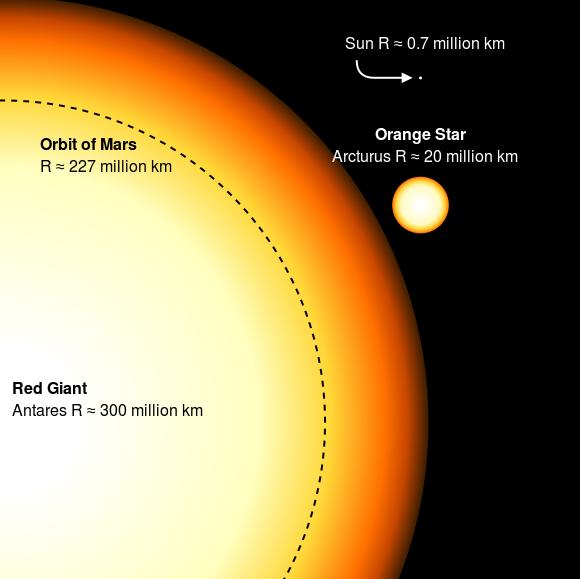 Contrasting the supergiant red star Antares with the giant star Arcturus and our sun. Image via Wikipedia

Antares is classified as an M1 supergiant star. The “M1” designation says that Antares is reddish in color and “cooler” than many other stars. Its surface temperature of 3500 kelvins (about 5800 degrees F.) is in contrast to about 10,000 degrees F. for our sun. Even though Antares’ surface temperature is relatively low, Antares’ tremendous surface area – the surface from which light can escape – makes this star very bright. In fact, Antares approaches 11,000 times the brilliance of our puny sun, a G2 star – but that is just in visible light. When all wavelengths of electromagnetic radiation is considered, Antares pumps out more than 60,000 times the energy of our sun!

Bottom line: The planet near the moon on the morning of March 29, 2016, is Saturn. The star Antares – Heart of the Scorpion in the constellation Scorpius – is also nearby and so is the planet Mars. Antares is a red supergiant star, destined to explode someday.