Before dawn, Orion the Hunter

By late August and early September, the constellation Orion is rising in the hours after midnight and is well up by dawn. It’ll continue to rise earlier … and earlier.

I noticed on your site that Orion returned to the predawn sky in late July. You called it the ‘ghost of the summer dawn.’ Due to cloudy skies and other conditions, I was not able to see it until August 6. When will Orion return to the evening sky?

Mike, Orion the Hunter – one of most noticeable constellations, with a short, straight row of three medium-bright stars at its mid-section – is always behind the sun as seen from Earth in June. It comes back to the predawn sky every year in late July or early August. By late August and early September, Orion is rising in the wee hours and is well up in the dawn sky, an hour before dawn, as shown on today’s chart.

Orion will soon be up by midnight, then 10 p.m. … and by December you’ll find it rising in early evening.

There’s nothing unusual about Orion’s shift from the predawn to the evening sky. This constellation is simply following the westward shift of all the stars caused by Earth’s orbit around the sun. As we orbit the sun, our night sky points toward an ever-changing panorama of the Milky Way galaxy. Our orbit causes all the stars to rise approximately four minutes earlier each day. 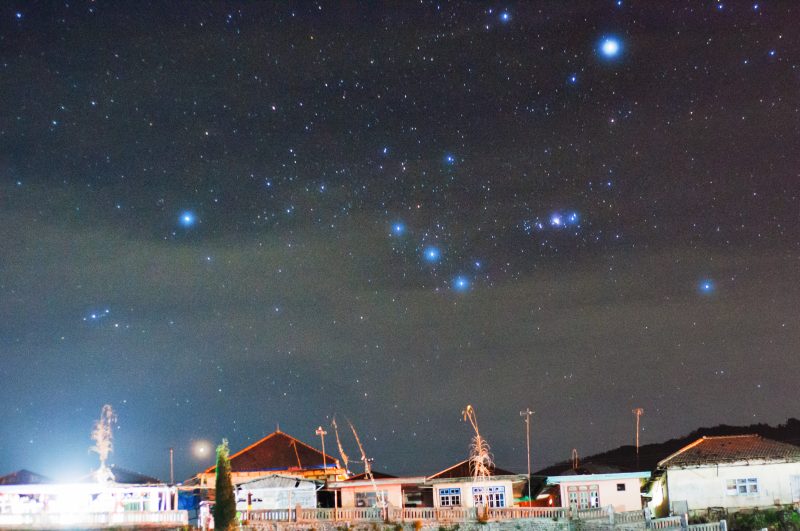 Bottom line: If you’re an early riser, look to the southeast and spot Orion the Hunter roaming the September predawn sky.