Focus on stars Betelgeuse and Rigel 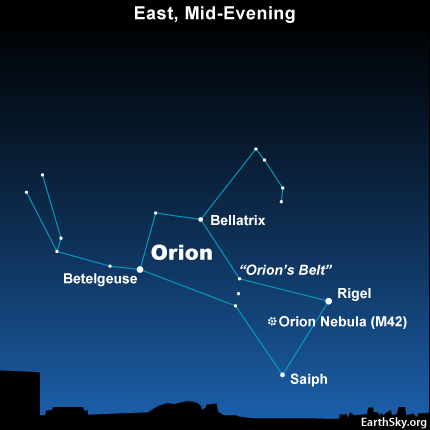 The star Rigel depicts Orion’s left foot. A blue-white supergiant and one of the most luminous stars known, it’s nearly 800 light-years away. If Rigel were as close as Sirius, the brightest star visible to the eye (and only about 8.6 light-years away), Rigel would shine much more brilliantly than Venus, our sky’s brightest planet.

Betelgeuse – the other bright star in Orion – represents the Hunter’s right shoulder. A red supergiant, Betelgeuse is no slouch of a star either. In fact, if Betelgeuse replaced the sun in our solar system, its outer layers would extend past Earth and Mars and to nearly the orbit of Jupiter.

On a dark night, when the moon has dropped out of the evening sky at the end of the first week of January 2018, you might want to look at the magnificent Orion Nebula, or M42, the fuzzy patch in Orion’s Sword.

Bottom line: Many constellations have a bright star, but Orion has two: Rigel and Betelgeuse. You’ll also easily recognize Orion by its “Belt” stars, three medium-bright stars in a short, straight row.

Thank you! Your submission has been received!
Oops! Something went wrong while submitting the form.
END_OF_DOCUMENT_TOKEN_TO_BE_REPLACED

Meet the Crab Nebula, remnant of an exploding star