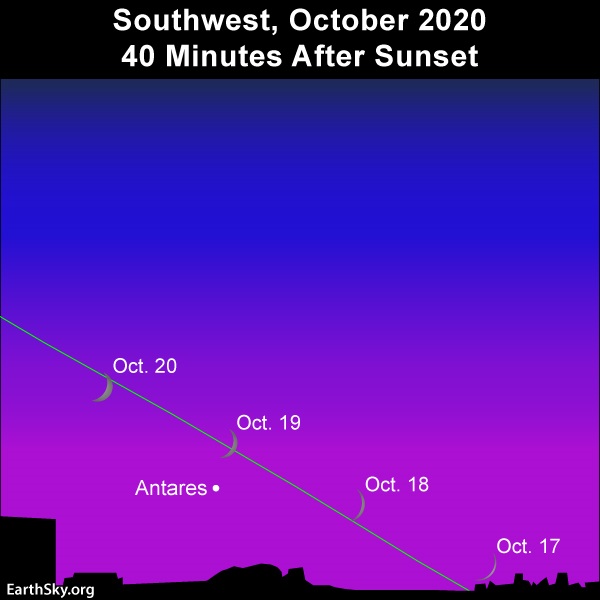 EarthSky lunar calendars show the phase of the moon for every day of 2021. Going fast – order yours now! Makes a great gift.

The closest new moon of the year was October 16, 2020, at which time the moon was transitioning out of the morning sky and into the evening sky. On October 17, some people might spot the young moon’s rebirth at day’s end. If you do see it, the moon will be low in the west, in the glow of sunset. Be forewarned … this young, pale, fragile crescent after sunset October 17 will be a challenge to spot, even with binoculars, especially from Northern Hemisphere locations. It’s hard to spot a young moon that’s less than a day old (less than 24 hours after new moon), especially in the autumn. If you want to try your luck on October 17, be sure to find an unobstructed horizon in the direction of sunset. Find a hilltop if you can. Bring along your binoculars!

From everywhere worldwide, the young moon will appear as a fatter crescent, farther from the sunset and easier to spot, on the evenings of October 18, 19 and 20. Day by day, a wider lunar crescent will appear higher up at sunset and will stay out longer after sundown.

Want to know when the moon sets in your sky? Visit Sunrise Sunset Calendars and remember to check the moonrise and moonset box. 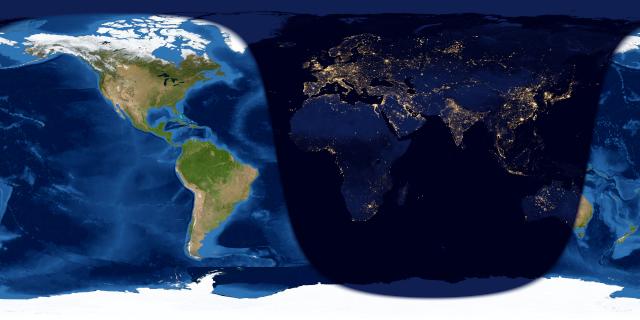 This map shows the day and night sides of Earth one day after new moon (October 17 at 19:31 UTC). On this map, the line of sunset is crossing the Atlantic Ocean. Every place east of this shadow line (Europe, Africa, Asia, Australia and New Zealand), the moon is less than one day (24 hours) old at sunset October 17. Every place west of it, the sunset comes more than one day (24 hours) after new moon on October 17. Thus for us in the Americas, the moon will be more than a day old on the evening of October 17. Yet the low angle of the ecliptic in autumn will keep the moon low in the sunset sky, making it harder to spot. Map via Earth View.

Because the new moon on October 16 was closely aligned with perigee – the moon’s closest point to Earth in its monthly orbit – the moon is now orbiting Earth at a maximum speed. On the average, the moon travels eastward in front of the backdrop stars of the zodiac at 13 degrees per day, and the young moon travels eastward of the sun at 12 degrees per day. (For reference, the moon’s angular diameter spans about 1/2 degree.)

This faster-moving moon benefits the world as a whole in the hunt for the young moon. Unfortunately for northerly latitudes, however, the ecliptic – the moon’s monthly pathway – crosses the horizon at a narrow angle at sunset and early evening. The autumn angle of the ecliptic buries the young moon in the glare of evening twilight. Although the moon will be over one day old at sunset October 17 in North America, it’ll still be hard to catch the lunar crescent on this date due to the ecliptic’s shallow autumn angle.

It’s spring now in the Southern Hemisphere, however. And, in springtime, the ecliptic – the monthly pathway of the moon – intersects the horizon at a steep angle at sunset and early evening. Therefore, in South America, the moon is higher up in the sky at sunset and stays out longer after sundown than it does in North America. That’s why we expect South American countries with clear skies and unobstructed western horizons to have a good chance of catching the young moon after sunset on October 17. 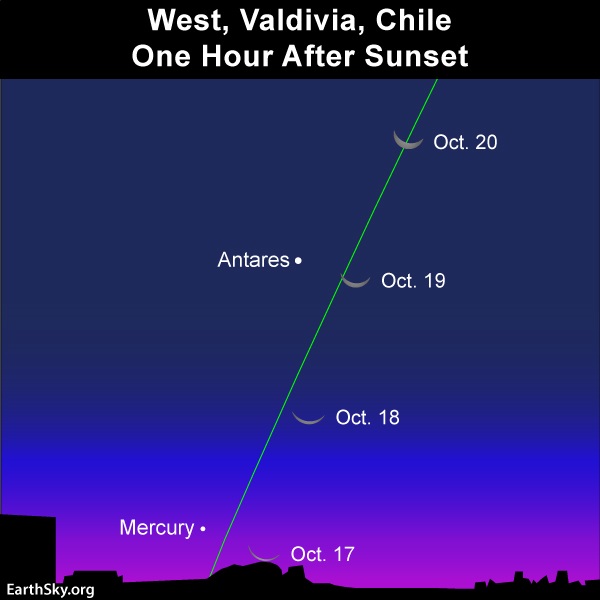 See the chart immediately above for Valdivia, Chile. Valdivia, Chile (40 degrees south latitude) and Philadelphia, Pennsylvania (40 degrees north latitude) and pretty much reside on the same longitude (75 degrees west). On early spring evenings, the ecliptic – pathway of the sun, moon and planets – hits the evening horizon at a steep angle; and on early autumn evenings, the ecliptic intersects the evening horizon at a narrow angle. Since it’s now early spring in the Southern Hemisphere and early autumn in the Northern Hemisphere, the steeper angle of the ecliptic in Valdivia keeps the moon (and the planet Mercury) out longer after sundown than in Philadelphia.

See why you might or might not catch the young moon after sunset October 17? If you do, enjoy it! Then expect the young moon to become more picturesque – and easier to see – in the following evenings, as a brighter, wider crescent. Watch for earthshine softly illuminating the dark (nighttime) side of the moon. Earthshine is twice-reflected sunlight, first reflected from the Earth to the moon, and then from the moon back to Earth.