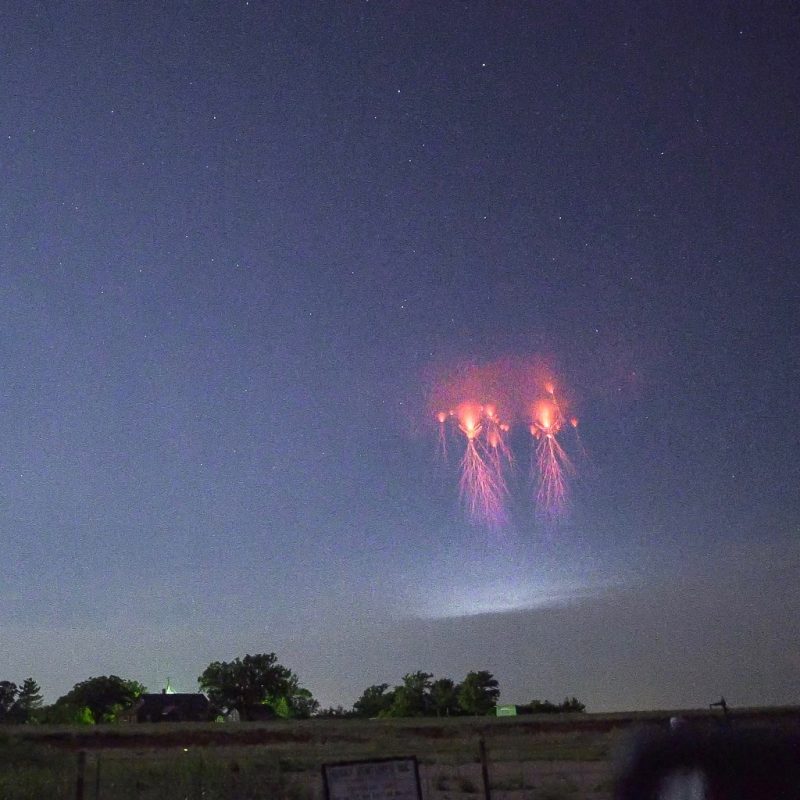 Paul Smith said this image is a still from a video.

Lightning sprites are offshoots of large-scale electrical discharges taking place high in Earth’s atmosphere, above thunderstorms. They’re often red in color, and so they’re sometimes called red sprites. They can be tens of miles high, but last only a few tens of milliseconds. Oklahoma – which lies within an area of the Great Plains known as Tornado Alley – is a good place to see lightning sprites. Paul Smith in Edmond, Oklahoma, is a longtime observer of them, and he captured this image on May 24, 2018. He told EarthSky:

My best sprite lightning capture to date. A beautiful jellyfish, close range from Highway 33 East of Kingfisher, Oklahoma, on the morning of May 24 at 12:55 a.m. local time, looking northwest towards Alva, Oklahoma.

You can even see the color change in the tendrils going into the lower atmosphere.

Want to see lightning sprites in real time? The video below, from Thomas Ashcraft in New Mexico – another veteran lighting sprite observer – captured it on June 23, 2014.

Sequence 01 from Thomas Ashcraft on Vimeo.

Bottom line: May 2018 example of sprite lightning over Oklahoma.