The fossils of Petrified Forest National Park in eastern Arizona date from about 225 million years ago, in the Late Triassic period of the Mesozoic era. At that time its climate was humid and sub-tropical. This area was a vast floodplain crossed by many streams. Tall, stately, pinelike trees grew here, and many kinds of reptiles roamed beneath them. According to Wilderness.net:

When the trees fell, they washed into the water to be buried under silt, mud, and volcanic ash. Groundwater seeped through the logs, bearing silica that later crystallized into quartz, which ultimately petrified the wood. After centuries of burial and upheaval, the land became the high, dry Arizona tableland seen today. While the forces of erosion sculpted the Painted Desert, they also brought the petrified wood slowly to the surface. 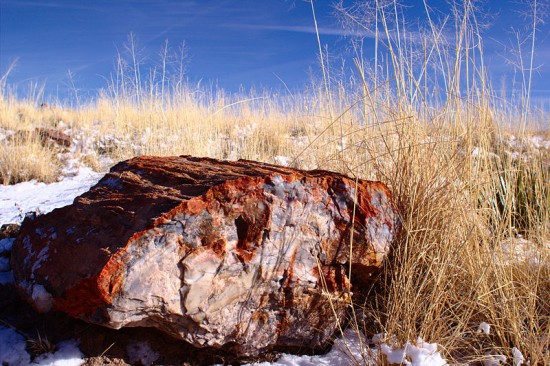 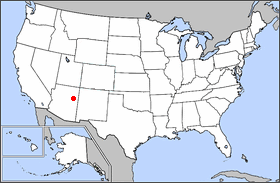 Petrified Forest National Park and Wilderness Area are in eastern Arizona. Interstate 40 cuts through the park.

The Petrified Forest National Wilderness Area is in northeastern Arizona, east of Flagstaff. Interstate 40 cuts through the park. In addition to the petrified wood logs, visitors can observe remnants of petro-glyphs and stone houses built by early human settlers to this region, dating back approximately 2,000 years. Wilderness backpack camping is allowed in the National Park. It is illegal to remove rocks or stones from this area.

The United States Congress designated the Petrified Forest National Wilderness Area in 1970. There are now a total of 50,260 acres here.