Notice the tilt in Saturn’s rings

You can see in this composite by Scott MacNeill that – in the past few years – Saturn’s rings have been appearing increasingly open from our earthly perspective. 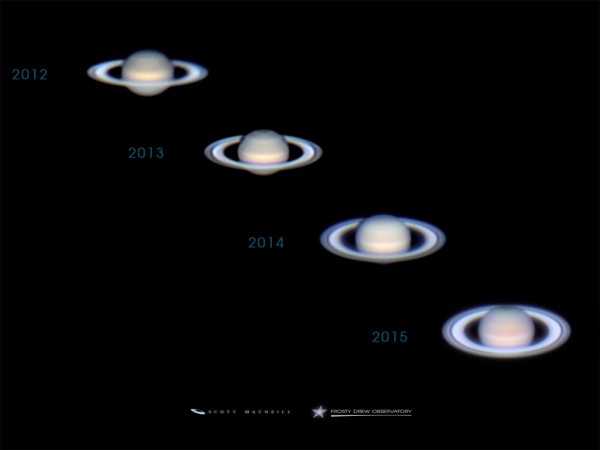 Scott McNeill at Frosty Drew Observatory in Charlestown, Rhode Island, posted this image at EarthSky Photo on G+. He wrote:

Hey Earthsky! Here is a collection of photos I have taken of Saturn from 2012 – 2015 showcasing the change in Saturn’s tilt from our point of view.

When Scott does catch his next photo of Saturn – which is rising earlier each evening now in the months before its coming June 3 opposition – he’ll find the rings of Saturn even more open – with more of their north face showing toward Earth – than they were in 2015. Saturn’s rings are inclined at a little more than 26 degrees from edge-on in March 2016.

Next year, in October 2017, the rings will be at their widest open, displaying a maximum inclination of 27 degrees.

As with so much in space (and on Earth), the appearance of Saturn’s rings from Earth is cyclical. In the year 2025, the rings will appear edge-on as seen from Earth. After that, we’ll begin to see the south side of Saturn’s rings, to increase to a maximum inclination of 27 degrees by May, 2032.

Bottom line: A composite image showing four years of Saturn and its rings. You can see that the rings are now opening with respect to Earth, showing us more and more of their northern face each year. Maximum openness will come in October, 2017, and then the rings – as seen from our earthly perspective – will begin to close again.