EarthSky community members from around the world share their photos and experiences of this year’s Geminid meteor shower, here. 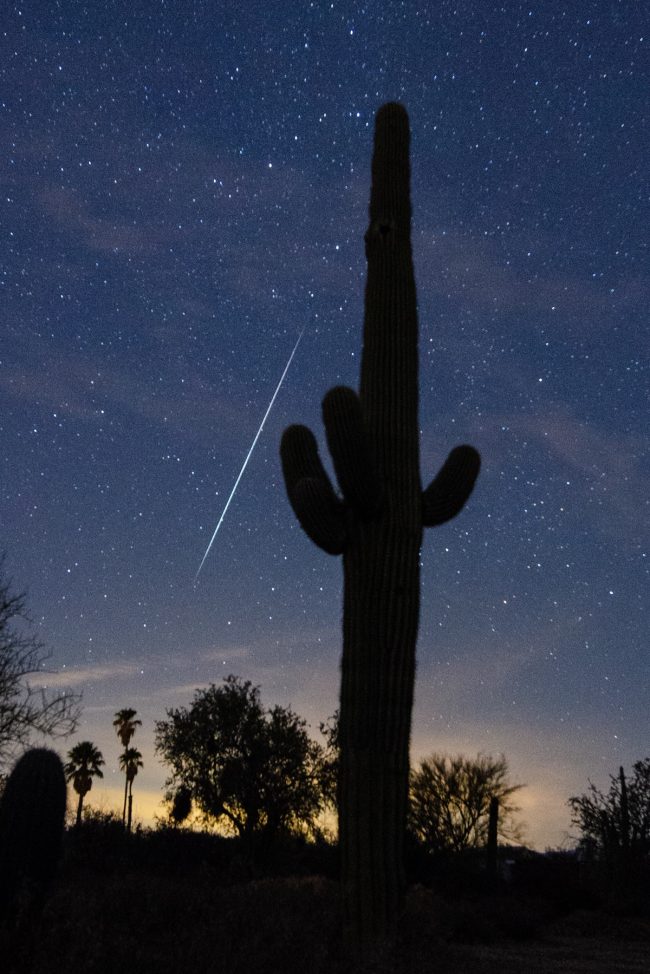 View at EarthSky Community Photos. | Roger Oban in Tucson, Arizona, captured this photo of a Geminid on December 14, 2020. He shot this meteor from his backyard. Thanks, Roger!

The 2020 Geminid meteor shower peaked around the night of December 13-14, and many reported a wonderful display! For example, veteran meteor-watcher Eliot Herman in Tucson, Arizona – who watched on December 13 in the late evening – wrote:

I had a great night! There were multiple fireballs and lots of Sirius-bright meteors [Editor’s note: Sirius is the brightest star in the sky]. I saw 77 total between 1:30 a.m. and 4 a.m. 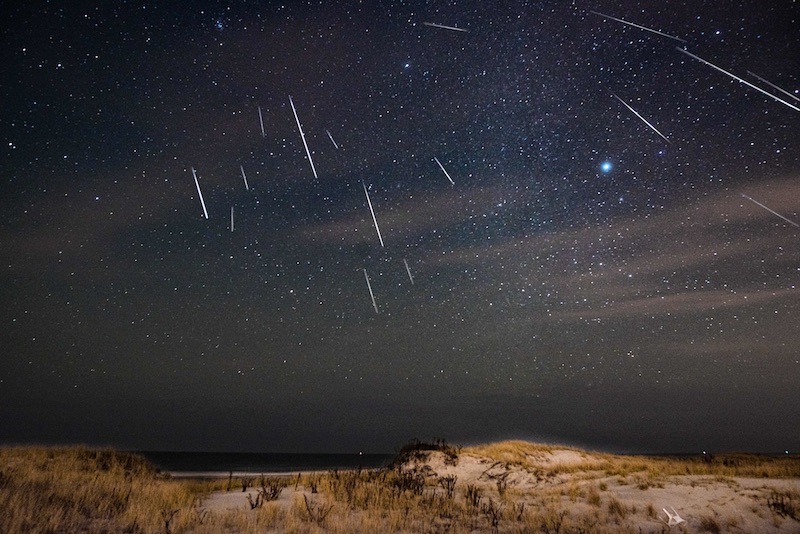 View at EarthSky Community Photos | Matthew Schmidt captured a number of meteors from Island Beach State Park, USA, on December 13, 2020, by stacking 16 shots into a mesmerizing composite. He wrote: “It was supposed to be a cloudy night at the Jersey Shore. We just happened to squeak out a few hours of clear skies. Great light show!”. Thank you, Matthew! 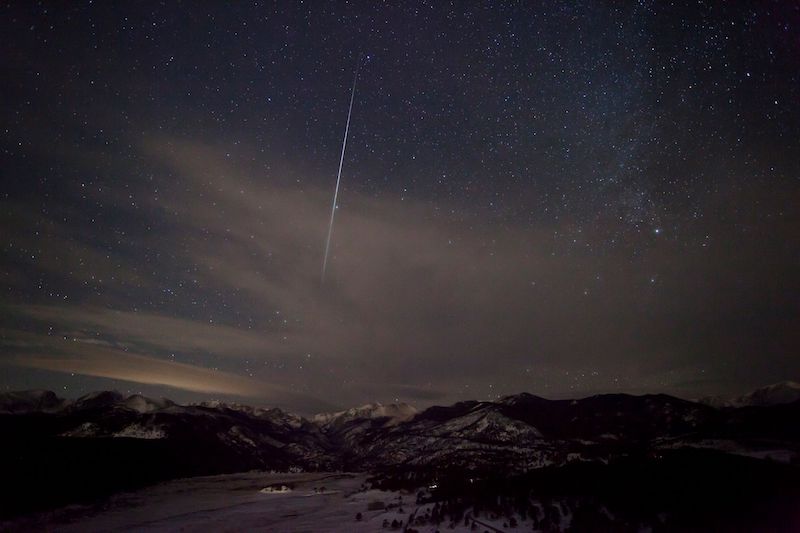 View at EarthSky Community Photos | Kent and Carolyn Carlson captured this meteor over Moraine Park, Rocky Mountain National Park, CO, USA on December 13, 2020. They wrote: “Carolyn and I bushwacked a half mile uphill through the snow after dark up to a small cliff that overlooks Moraine Park. We were rewarded by a most spectacular meteor show, mostly originating around or through the constellation Orion in the east. We only spent 2 hours at the site because of the blowing snow and gusty winds.” Thank you, Kent and Carolyn! 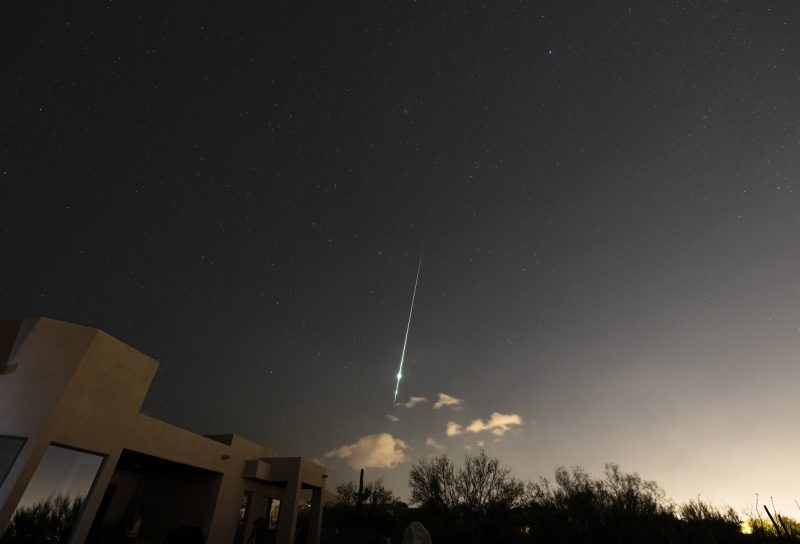 Eddie Irizarry in Puerto Rico captured a short video that he shared with us. He commented:

The meteor shower was magnificent!

Not everyone saw a good show, though. Bob Holderness-Roddam from Australia did his best, but was less than impressed by the shower near him. He wrote:

I crawled out of bed at 1 a.m. Australian Eastern Daylight Saving Time on Monday morning, got into my car and drove to a relatively dark area away from the city – just a couple farmhouse lights in the distance. Excellent view of Castor and Pollux, as well as Orion and other constellations. But, bugger all meteors. Five in total from 1:15 a.m. to 3:20 a.m. Three pretty faint, the other two not particularly bright. Did I do something wrong, or was the predicted display a ‘no show’?

You did exactly right, Bob. It’s always the case that – the farther you are from city lights – the more meteors you’ll see. But this is nature; it always has a unpredictable component. The best you can do for any meteor shower is get away from city lights, look up, and hope for the best! Although the peak of the Geminids has passed, this meteor shower is expected to remain active until around December 22 this year, according to the American Meteor Society. Try again?

Check out the wonderful photos below, from this year’s Geminid meteor shower. Thanks to all who submitted to EarthSky Community Photos! 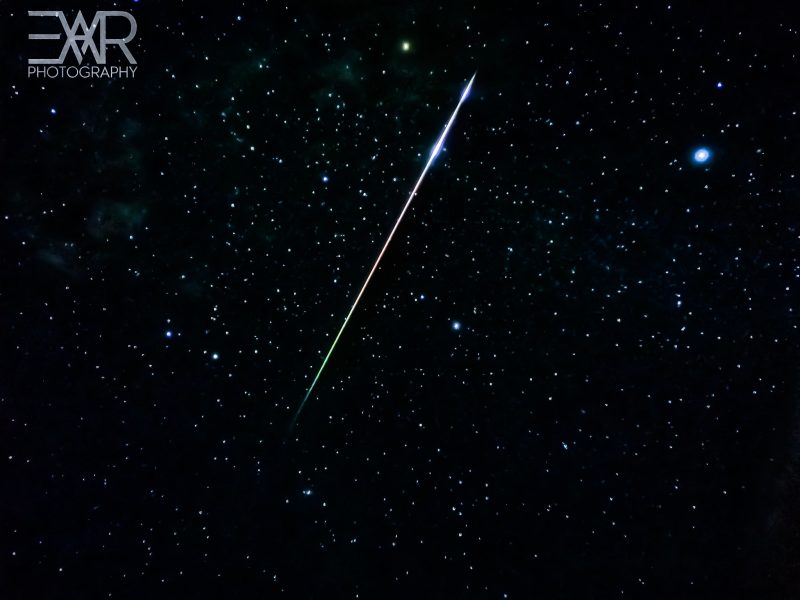 View at EarthSky Community Photos. | Kristian Evar Palac in Lucban, Quezon, Philippines captured this image on December 15, 2020 during the peak of the Geminid meteor shower. Thank you, Kristian! 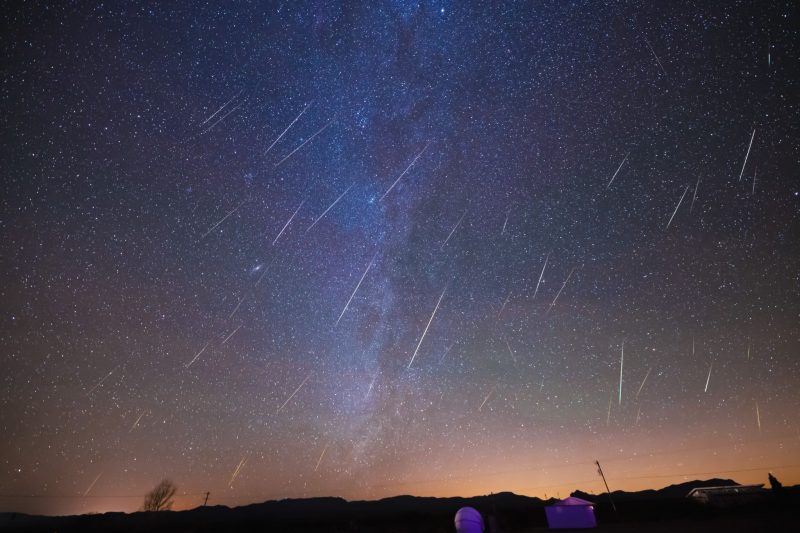 View at EarthSky Community Photos. | Chirag Bachani captured the images to make this composite of the Geminids on December 14, 2020. He wrote: “The Geminid meteor shower produced a spectacular show with over 100 meteors per hour at the peak around 2 a.m. local time on December 14. This image displays over 40 meteors captured throughout the night from a Bortle Class 1 dark sky in Marathon, Texas. Many of the meteors lasted over 2 seconds and were typically green and blue. Also present is the Andromeda galaxy in the middle left of the image.” Thank you, Chirag! 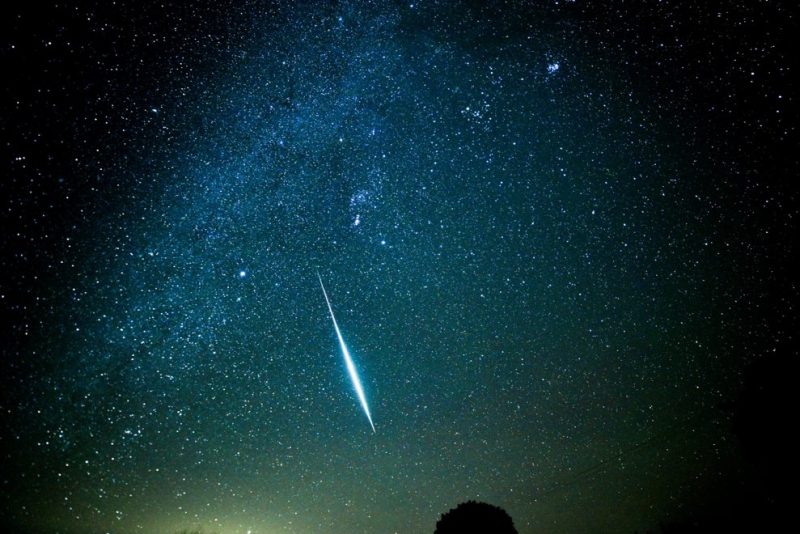 View at EarthSky Community Photos. | Martha Dean in San Saba County, Texas, captured this photo of a Geminid fireball on December 14, 2020. She wrote: “After the clouds cleared the skies were full of Geminid meteors. A beautiful, chilly night in Central Texas.” Thank you, Martha! 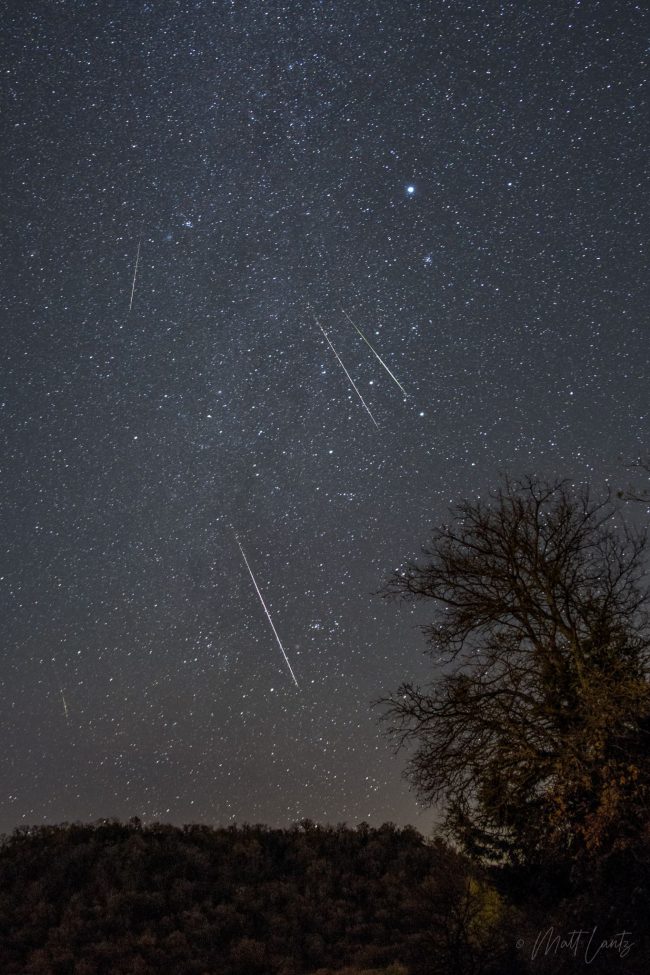 View at EarthSky Community Photos. | Matt Lantz in Palo Pinto County, Texas, captured this photo of 5 Geminids on December 14, 2020. He wrote: “The Geminid meteor shower did not disappoint this year! Was so glad to get several bright meteors in this location over a short period of time. The shower was amazing, but it was late, cold, and I was ready to go home.” Thanks, Matt! 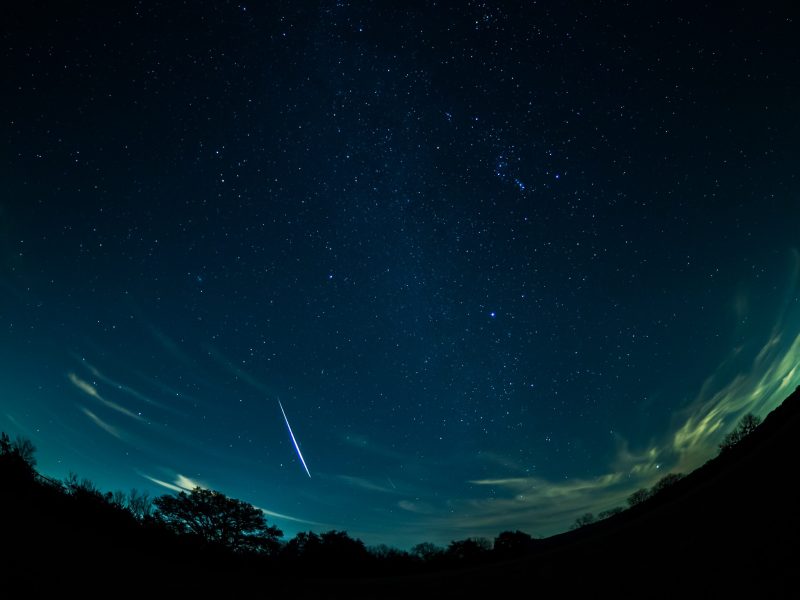 View at EarthSky Community Photos. | David Byers in the Texas Hill Country captured this photo of a bright Geminid on December 14, 2020. He wrote: “Drove out to a dark sky in the hill country. When I started shooting it was overcast but then cleared up about an hour before this shot.” Thanks, David!

Bottom line: Some EarthSky community members saw a great 2020 Geminid meteor shower and shared their images with us.