Jet contrail shadows appear to be cast by a low-altitude bright light shining upwards. In fact, the light source is the sun, and the shadow is cast downward on clouds below. 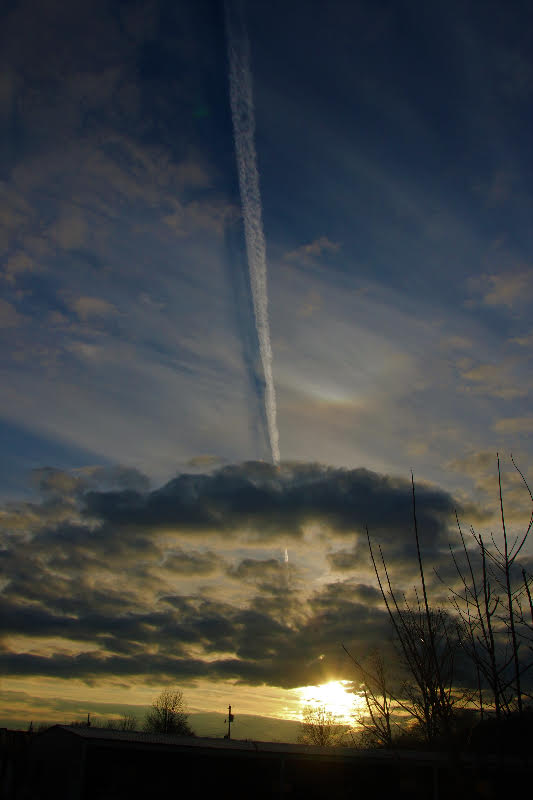 Contrail shadow and tangent arc by Don Spain on January 20, 2017.

My sky spotter Nancy called me from downtown and said I should check the sky for possible sundogs. I am well south of her location and did not see any sundogs, but saw two different atmospheric phenomena. The most obvious is the shadow of the jet contrail on the clouds…

Isn’t it cool? We don’t see these very often, although we did get another photo as nice as Don’s back in 2013. Don also mentioned that the shadow looked “higher than the clouds.” In fact, it’s not. I emailed physicist Les Cowley at the great website Atmospheric Optics. He emailed back, confirming that:

The clouds and shadow are below the contrail, although it always looks the other way!

On his page about jet contrails, Les wrote:

Contrail shadows sometimes appear counter-intuitive. [They may seem to be cast] by a low altitude bright light shining upwards and casting the contrail shadow on a higher cloud. The reverse is the case …

Les had mentioned in our email exchange about contrail shadows a few years ago that there are exceptional cases where the clouds can be below the contrail, although that’s not what’s happening in Don Spain’s photo. How does he know? He can tell by the distance of the shadow from the contrail. In 2013, he had explained:

Like all statements there is an exception! At sunset and sunrise rays can travel very slightly upwards to illuminate the underside of clouds. Under those circumstances however a contrail shadow would be a long way from the contrail.

Meanwhile, Don mentioned capturing two atmospheric phenomena in this photo. The second is a very delicate upper tangent arc. Like the sundogs that Don’s friend Nancy mentioned earlier that evening, they are part of the solar halo phenomenon (see Les Cowley’s diagram, showing the parts of an ice halo and how sun dogs and tangent arcs relate to each other). The one Don caught is near the center of the photo, near the bottom of the image, and appears slightly concave with respect to the sun: a little arc of light. In fact, tangent arcs appear as Vs, which may be sharper or flatter depending on the sun’s height above the horizon. 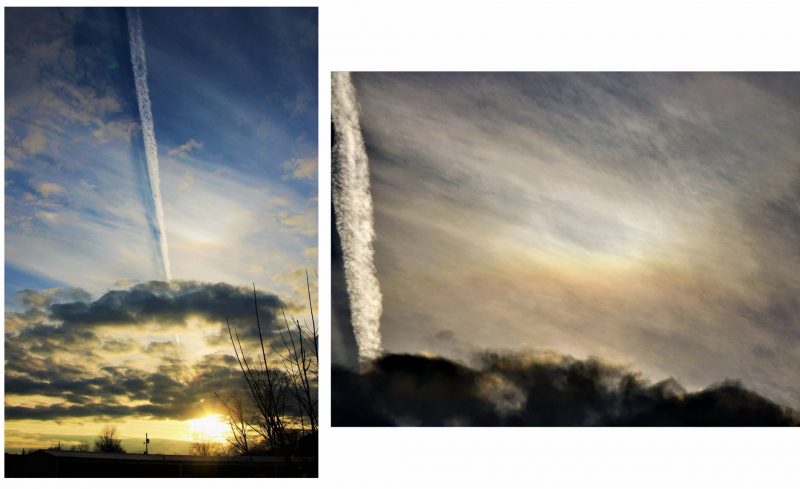 Photos by Don Spain. The one on the right is a close-up of the tangent arc he captured on January 20.

BTW, the photos on this page show a contrail, not a chemtrail.