Jet contrail shadows may appear to be cast by a low-altitude bright light shining upwards. In fact, this shadow is cast on clouds below the jet and its contrail. 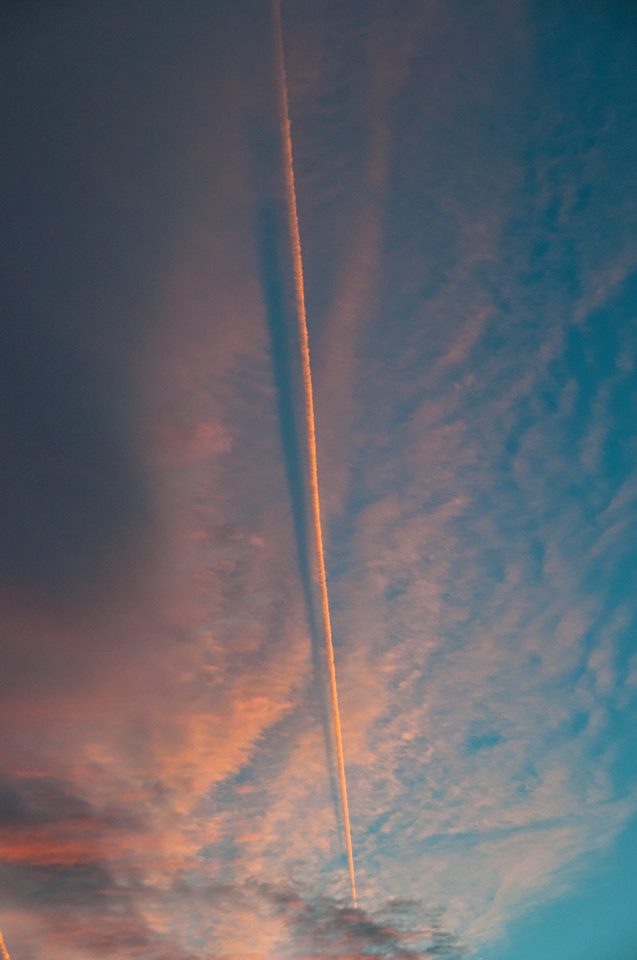 Janet Furlong in Culpeper, Virginia captured this beautiful photo of a shadow from a jet contrail (NOT chemtrail), cast on clouds, on November 23, 2013. She said a cold front had moved in that day and that there was a 40% temperature difference that evening from the evening before. As for this contrail shadow, she said her dad had been fascinated by it and asked her to photograph it. Overall, of the sky that evening, Janet wrote:

I could not believe my eyes …

We wondered what light source was creating the shadow and asked an expert, Les Cowley at the great website Atmospheric Optics. On his page about jet contrails, you can see, if you look, that he said:

Contrail shadows sometimes appear counter-intuitive. [They may seem to be cast] by a low altitude bright light shining upwards and casting the contrail shadow on a higher cloud.

The reverse is the case …

In other words, he said, the jet itself and its contrail are always higher up than the shadow, which is cast on clouds below. By email, Les told me:

Like all statements there is an exception! At sunset and sunrise rays can travel very slightly upwards to illuminate the underside of clouds. Under those circumstances however a contrail shadow would be a long way from the contrail.

So he doesn’t think that’s the case here; as usual, he thinks, this shadow is actually below the jet and its contrail. Since there was no moon in the evening sky on November 23, Les also thinks this contrail shadow is caused by the setting sun. He wrote:

From the lighting on the clouds and the appearance of the contrail shadow I would estimate that we are close to sunset and that would also put the contrail as only slightly above the cloud layer.

Thank you, Janet and Les! 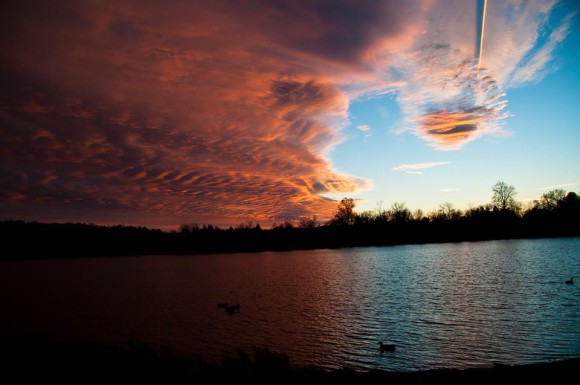 Here’s another image of a different part of the sky, on the evening that Janet Furlong captured her contrail shadow. Notice the beginnings of the contrail and shadow on the right side of this photo. The photo helped Les Cowley of Atmospheric Optics draw some conclusions about the geometry of the contrail, shadow, and light source.

This is a contrail, not a chemtrail.