See video of a close and loud lightning strike. “It gave me a fright as the flash was bright and was accompanied by a very loud bang!” Video here.

CAUTION! At full volume the bass on slow motion replay is very loud and could damage sub-woofers.

On November 14, 2016, there was no supermoon visible from here in Mutare, Zimbabwe due to a violent thunderstorm with hail and ultimately 3.5 inches (90 mm) of torrential rain, which persisted into the night. Our local telephone company had installed a pole for my new fiber internet connection only a week earlier, situated on the opposite side of the road, less than 50 yards (meters) from the front of the house. That pole was struck by lightning while I was filming the storm! Gave me quite a fright as the flash was very bright and accompanied by a sharp click of static electricity and almost immediately afterwards by a very loud bang, which could be felt and shook the house.

This was followed by a deep rumbling sound, which persisted for almost 20 seconds.

The video above, which begins at normal speed then plays in three slow-mo rates of x0.5, x0.25 and x0.125 and ends at normal speed again, shows the brief but intense lightning flash descending towards the pole, which is just below the field of view. 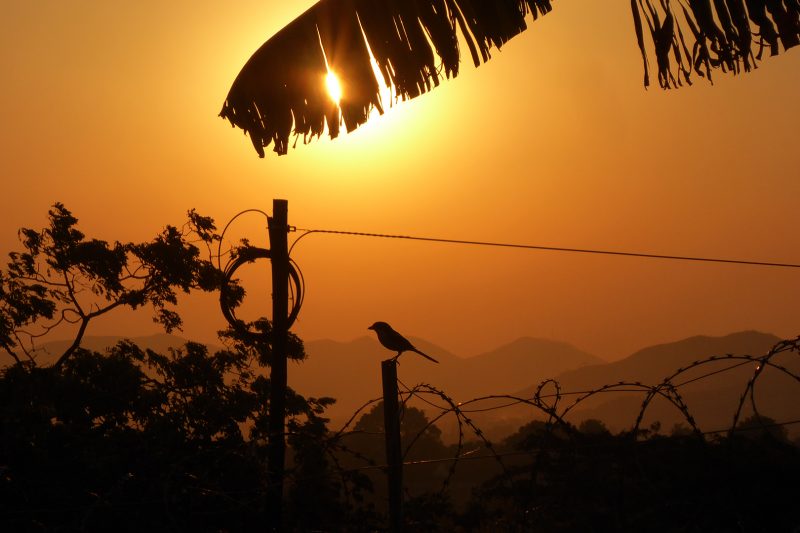 The new fiber internet connection on a better day, the day it was installed … about a week pre-lightning strike. Photo via Peter Lowenstein.

An electromagnetic pulse was generated, which was strong enough to affect the electronics in the Panasonic Lumix DMC-TZ10 being used to film the storm and produced strange bright histogram shaped patterns in the two frames that captured the strike.

The video thumbnail, above, and animated gif, below, have been processed to remove these.

By the way, the new fiber optic internet connection was unaffected by the strike because optical fiber does not conduct electricity. But the strike did induce high voltages that damaged the LNB in my rooftop satellite TV dish and connected decoder.

Peter Lowenstein lives on a hill in Mutare, Zimbabwe and sees and captures an amazing number of interesting sky phenomena. Check out his other posts here.