City below, serenity above

The moon near Venus shining over the busy Sydney, Australia streets as seen through the lens of EarthSky Facebook friend Goran Hasanbeg on August 9, 2013. 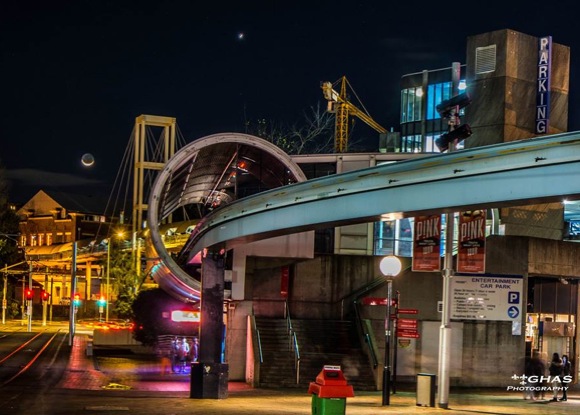 Look for the moon and the dazzling planet Venus to appear in the western sky again on Friday, August 9, 2013. Look soon after sunset! They follow the sun beneath the horizon shortly after it begins to get dark. Our friend Goran Hasanbeg in Sydney, Australia has already seen and captured tonight’s western twilight sky scene. Here are the moon and Venus, shining high above the busy streets of Sydney, Australia on August 9. On the bottom right you can see part of the light rail system in Sydney,

And of course, the Perseid shower is still building to its peak. This weekend should be grand for meteors. The shower is expected to peak in the dark hours before dawn on Monday and Tuesday mornings – August 12 and 13!!

Moon and Venus at dusk. Perseid meteors this weekend