Why the moon’s near and far sides look different

New research suggests that a wayward dwarf planet collided with the moon in the early history of the solar system, causing the stark difference between the moon’s heavily-cratered far side and the lower-lying open basins of its near side.

The near side of the moon (left) looks very different from the far side. Image via NASA’s Lunar Reconnaissance Orbiter/GSFC/Arizona State University/Slate.

We’ve all heard that the moon keeps a single face toward Earth. And, as the spacecraft images at top show, the moon’s two faces – its near side and far side – look very different from each other. The moon’s far side is heavily cratered, but noticeably lacking the broad, dark, lower-lying basins, the lunar “seas” or maria, that make up the familiar face of the man (or lady, or rabbit) in the moon. Over the past several decades, since we humans first sent our spacecraft around the back side of the moon, astronomers have put forward various ideas to explain the difference between the moon’s two hemispheres. The American Geophysical Union announced a new study on May 20, 2019, based on new evidence about the moon’s crust, suggesting the differences were caused by a wayward dwarf planet colliding with the moon in the early history of the solar system.

A report on the new research was published May 20 in AGU’s peer-reviewed Journal of Geophysical Research: Planets.

A statement from AGU explained:

The mystery of the moon’s two faces began in the Apollo era when the first views of its far side revealed the surprising differences. Measurements made by the Gravity Recovery and Interior Laboratory (GRAIL) mission in 2012 filled in more details about the structure of the moon — including how its crust is thicker and includes an extra layer of material on its far side.

There are a number of ideas that have been used to try and explain the moon’s asymmetry. One is that there were once two moons orbiting Earth and they merged in the very early days of the moon’s formation. Another idea is that a large body, perhaps a young dwarf planet, found itself in an orbit around the sun that put it on a collision course with the moon.

If the second scenario is true, it would have happened later than the first scenrio – the merging moons – after the moon had formed a solid crust. That’s according to Meng-Hua Zhu of the Space Science Institute at Macau University of Science and Technology and lead author of the new study. If the second idea is true, signs of the impact of a young dwarf planet with our moon should be visible today in the moon’s crust. And so it is, these scientists say. Zhu said:

The detailed gravity data obtained by GRAIL has given new insight into the structure of the lunar crust underneath the surface.

Zhu’s team of researchers used GRAIL’s new findings in computer simulations, to test different early-moon impact scenarios. The study’s authors ran 360 computer simulations of giant impacts with the moon to find out whether such an event millions of years ago could reproduce the crust of today’s moon as detected by GRAIL. Their statement explained:

They found the best fit for today’s asymmetrical moon is a large body, about 480 miles (780 km) in diameter, smacking into the nearside of the moon at 14,000 miles per hour (22,500 km per hour). That would be the equivalent of an object a bit smaller than the dwarf planet Ceres moving at a speed about one-quarter as fast as the meteor pebbles and sand grains that burn up as “shooting stars” in Earth’s atmosphere. Another good fit for the impact combinations the team modeled is a slightly smaller, 450-mile (720-km) diameter, object hitting at a mildly faster 15,000 miles per hour (24,500 km per hour).

Under both these scenarios, the model shows the impact would have thrown up vast amounts of material that would fall back on the moon’s surface, burying the primordial crust on the far side in 3 to 6 miles (5 to 10 km) of debris. That is the added layer of crust detected on the far side by GRAIL, according to Zhu.

The new study suggests the impactor was not likely an early second moon of Earth’s. Whatever the impactor was – an asteroid or a dwarf planet – it was probably on its own orbit around the sun when it encountered the moon. 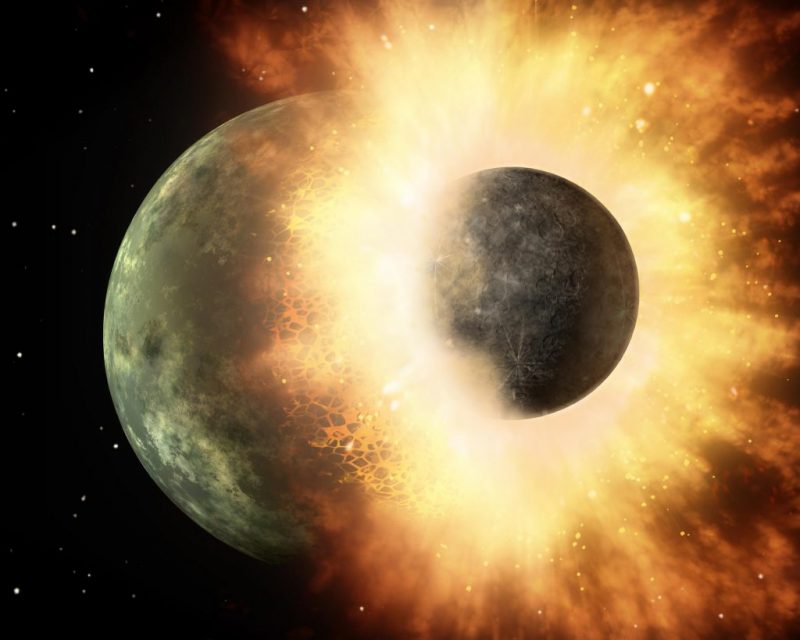 Artist’s concept of a collision between 2 planetary bodies. New research suggests the stark difference between the moon’s heavily-cratered far side and the lower-lying open basins of the nearside were caused by a wayward dwarf planet colliding with the moon in the early history of the solar system. Image via NASA JPL-Caltech/AGU.

Bottom line: New research suggests that a wayward dwarf planet collided with the moon in the early history of the solar system, causing the stark difference between the moon’s heavily-cratered far side and the lower-lying open basins of its near side.

Source: Are the moon’s nearside-farside asymmetries the result of a giant impact?