Videos and links related to potential health effects to astronauts from space radiation, plus solutions and countermeasures.

Space radiation effects – from solar storms and, even more importantly, from galactic cosmic rays – are known to be harmful to astronauts exploring beyond Earth’s protective magnetic field. The most important potential negative health effect is cancer, but there’s also evidence for cataracts and damage to the cardiovascular and central nervous system from space radiation. NASA has been exploring potential physical, biological and operational countermeasures. The short video above – released by NASA on October 12, 2017 – talks specifically about space radiation and the journey to Mars. Pat Troutman, NASA Human Exploration Strategic Analysis Lead, commented in the video above:

Some people think that radiation will keep NASA from sending people to Mars, but that’s not the current situation. When we add the various mitigation techniques up, we are optimistic it will lead to a successful Mars mission with a healthy crew that will live a very long and productive life after they return to Earth.

If you want more about NASA’s current understanding of space radiation as it relates to the human exploration of space, watch the 1-hour video below. It’s a recorded talk from October 9, 2017 by Jack Miller of Lawrence Berkeley National Laboratory, Berkeley, California. Miller has a Ph.D. in experimental relativistic heavy ion physics from the Lawrence Berkeley National Laboratory Bevalac. His research interests have included: interactions of galactic cosmic radiation and solar particles in matter and biological organisms, with applications to mitigation of radiation effects on humans in space; experimental tests of nuclear fragmentation and transport models; development of spacecraft and habitat radiation shielding; and development of radiation instrumentation for use in human space flight. The talk is called Space Radiation and its Impact on Human Exploration of the Solar System. You’ll find an extended bio for Jack Miller here.

Why Aren’t The Van Allen Belts A Barrier To Spaceflight? June 16, 2017 article in Forbes from Jillian Scudder, a physics and astronomy professor at Oberlin College (@Jillian_Scudder on Twitter). She speaks specifically to naysayer websites that claim the space shuttle, flight to the moon and other missions are “hoaxes” and “impossible” because of the Van Allen radiation belts.

How NASA Got Apollo Astronauts Through the Dangerous Van Allen Belts. Article in Popular Mechanics from January 9, 2017. 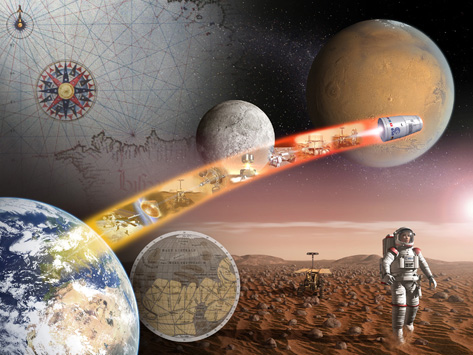 Bottom line: Space radiation is a challenge to human space exploration, and many experts are working on solutions and countermeasures.