Why Neptune and Uranus are different

We think of Uranus and Neptune almost as twins. In some ways, they are very similar. But a new study by researchers at PlanetS explains why, in some aspects, they are also radically different.

Uranus (left) and Neptune (right). While the 2 ice giant planets have similarities, they also have significant differences, which might be explained by impacts from other large bodies in the early solar system. Image via NASA/ JPL/ PlanetS.

We tend to lump Uranus and Neptune together in our thoughts, almost as if they’re twin worlds. They are nearly the same size – bigger than Earth, but smaller than Jupiter or Saturn – and both are bluish or bluish-green, with deep atmospheres and icy interiors. But, though superficially similar, Uranus and Neptune are really quite different. They’re more different from each other than most people think. And, though their differences still haven’t been fully explained, it now seems that mighty collisions with careening planet-sized bodies – early in solar system history – might be the key.

Researchers of the National Centre of Competence in Research PlanetS (PlanetS) at the University of Zurich in Switzerland ran computer simulations to explore the role of collisions in shaping the differences between Uranus and Neptune. The findings were announced by PlanetS on February 4, 2020, with the associated research paper first published on November 22, 2019.

Uranus and Neptune are the two most distant known major planets in our solar system. Both are now considered ice giants. Both are fundamentally different from the larger gas giants Jupiter and Saturn, and from smaller rocky worlds like Earth. Uranus and Neptune have similar masses and internal compositions. Their outer atmospheres are composed of hydrogen, helium and methane, while their mantles are a combination of water, ammonia and methane ices, and their cores are a mix of rock and ice.

Uranus tends to have a blander appearance than Neptune and is mostly cloudless. Neptune’s atmosphere has darker bands than that of Uranus, with streaks and wisps of white clouds, as well as a large “dark spot.”

But there are also more significant differences between the two worlds, and the researchers wanted to know why. According to a statement by Christian Reinhardt, one of the PlanetS members:

… there are also striking differences between the two planets that require explanation. 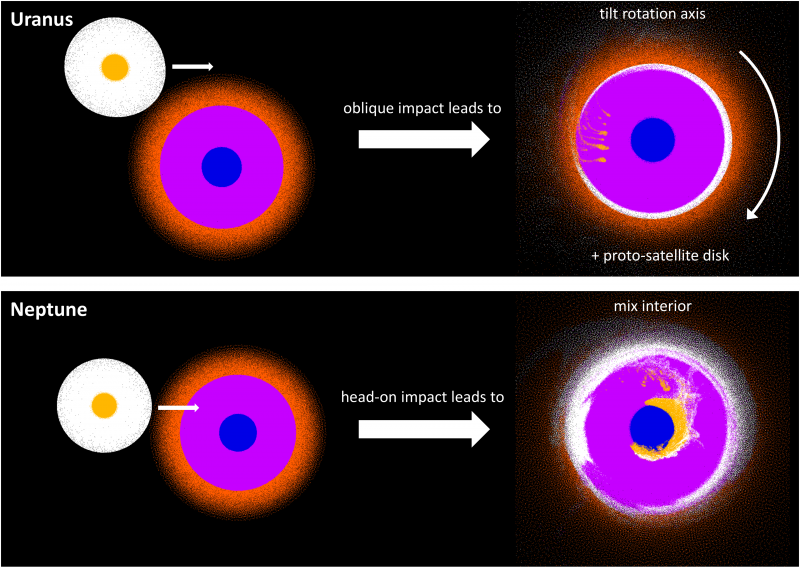 Diagram depicting the the formation of both Uranus and Neptune, and how they evolved differently due to impacts from other large objects in the early solar system. Image via Reinhardt & Helled/ ICS/ University of Zürich/ PlanetS.

Another team member, Joachim Stadel, pointed out that, unlike Neptune and Earth and most other major planets in our solar system, Uranus doesn’t rotate around an axis that lies nearly perpendicular with respect to the plane of its orbit. Instead:

… Uranus and its major satellites are tilted about 97 degrees into the solar plane, and the planet effectively rotates retrograde with respect to the sun.

Another key difference is that the larger moons of Uranus are in stable orbits that are aligned with the tilt of the planet. But Neptune’s largest moon, Triton, circles the planet at a very inclined orbit.

These differences suggest that Uranus’ moons formed from the same disk of dust and gas that the planet itself did, while Triton was probably once a separate object captured by Neptune’s gravity.

According to the researchers, these and other differences point to different kinds of impacts that affected the two planets long ago. 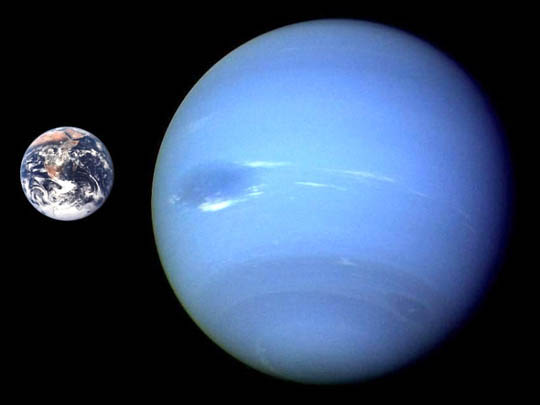 Size comparison of Earth and Neptune. According to the new study, objects with about 1 to 3 Earth masses collided with both Uranus and Neptune after they formed. Uranus was just grazed, while Neptune suffered a head-on impact. Image via NASA/ Sky & Telescope.

The researchers ran computer simulations in order to explore a range of different possible collisions on both planets. From the paper:

Despite many similarities, there are significant observed differences between Uranus and Neptune: while Uranus is tilted and has a regular set of satellites, suggesting their accretion from a disk, Neptune’s moons are irregular and are captured objects. In addition, Neptune seems to have an internal heat source, while Uranus is in equilibrium with solar insulation. Finally, structure models based on gravity data suggest that Uranus is more centrally condensed than Neptune. We perform[ed] a large suite of high-resolution SPH simulations to investigate whether these differences can be explained by giant impacts.

For Uranus, we find that an oblique impact can tilt its spin axis and eject enough material to create a disk where the regular satellites are formed. Some of the disks are massive and extended enough, and consist of enough rocky material to explain the formation of Uranus’ regular satellites.

For Neptune, we investigate whether a head-on collision could mix the interior … We find that massive and dense projectiles can penetrate towards the center and deposit mass and energy in the deep interior, leading to a less centrally concentrated interior for Neptune.

We conclude that the dichotomy between the ice giants can be explained by violent impacts after their formation.

It is often assumed that both planets formed in a similar way.

But these results show that their formations – or at least their very early history – were not so similar as first thought. 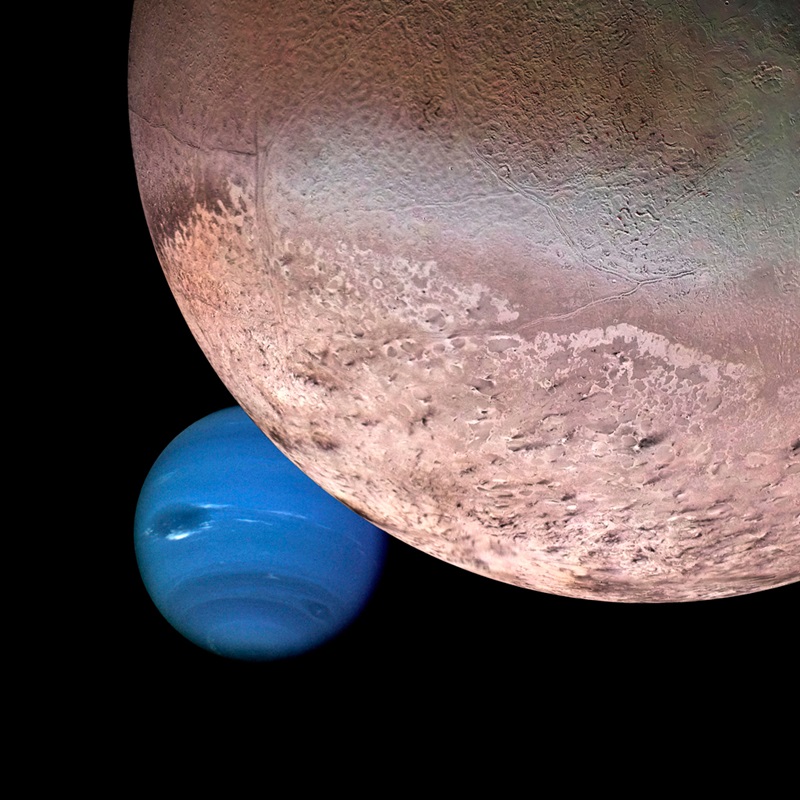 Neptune and its largest moon, Triton, whose orbit is highly inclined. Triton’s orbit suggests it was captured by Neptune’s gravity. Meanwhile, the moons of Uranus likely formed in the same disk of gas and dust that Uranus did. Image via NASA/ JPL/ USGS/ Astronomy.

In one scenario, where Uranus and Neptune start off as being more similar, it was found that an impact with a body of one to three Earth masses could explain the differences we see today. If the object just grazed Uranus instead of a head-on collision, the planet’s interior would not be affected but the impact would still be enough to tilt the planet.

Conversely, if Neptune did experience a head-on impact, the collision would have affected the planet’s interior but would not form a disk of debris. This would explain why Neptune doesn’t have any large moons in regular orbits. A large heat flux on Neptune also points to the interior being remixed in a massive collision.

The simulations show how the two planets probably started off being much more similar, but the different kinds of collisions altered them significantly. As team member Ravit Helled said:

We clearly show that an initially similar formation pathway to Uranus and Neptune can result in the dichotomy observed in the properties of these fascinating outer planets. 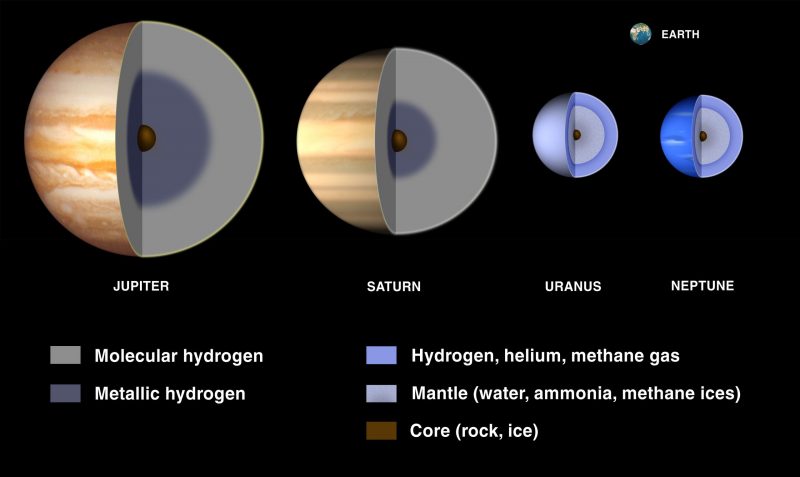 Comparison of the interior structures of the 2 gas giants, Jupiter and Saturn, and the 2 ice giants, Uranus and Neptune. Earth is to scale. Image via NASA/ Lunar and Planetary Institute.

The results of this study show how random events – like planetary collisions with other large bodies in the early solar system – can decidedly affect the future evolution of a planet. Uranus and Neptune are the worlds we see today because of such events, this study says. What if neither planet had been hit? What if Neptune had just been grazed instead of Uranus? What would these ice giants be like today in such circumstances? We don’t know, but knowing more about how they could have been affected will help scientists better understand the formation of these types of planets, as well as the gas giants like Jupiter and Saturn, and rocky worlds like Earth, Mars, Venus, and Mercury.

With a better understanding of how the planets in our own solar system formed and evolved, we can then also apply that knowledge to the study of worlds in distant solar systems.

Bottom line: A new study by researchers at PlanetS sheds light on why Uranus and Neptune are similar in some ways, but radically different in others. It seems collisions – early in solar system history – are the key.

Source: Bifurcation in the history of Uranus and Neptune (the role of giant impacts)