Why is Mars near the moon on eclipse night?

A total eclipse moon has to happen at full moon. Outer planets are always near the full moon in their month of opposition. Mars reached opposition April 8 …

On the night of April 14-15, the night of the first of four total lunar eclipses in the coming tetrad, you’ll find a very bright red “star” near the moon. It’s really not a star at all, but the red planet Mars. Why is Mars near the moon on the night of the lunar eclipse? The answer is simple. On April 8, Earth in its smaller orbit passed generally between Mars and the sun. Our motion in orbit has placed Mars opposite the sun from our point of view, visible all night while the sun is below our feet. It’s what astronomers call an opposition of Mars. Meanwhile, a full moon is also, always, opposite the sun. It must be so, in order to appear full from Earth. An outer planet is always near the full moon during the month it reaches opposition. A total eclipse always happens at full moon. Voila! Mars is near the moon on eclipse night. Hopefully, the illustrations below will help you visualize it. Clear skies, everyone! 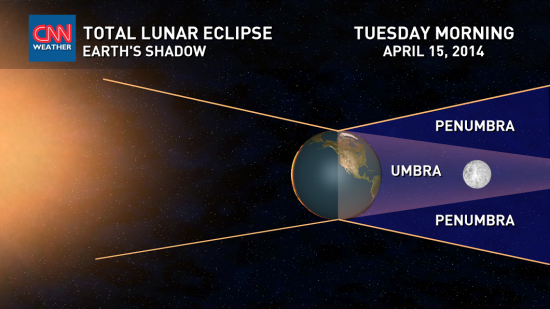 In order to appear full from Earth, the moon must be opposite Earth from the sun, and its fully lighted hemisphere must be facing our way. Likewise, for a lunar eclipse to occur, the moon must be full – opposite the sun. Illustration via Matt Daniel with CNN Weather. Used with permission.

Mars is also opposite the sun during during April, 2014. This illustration shows Earth and Mars in their orbits, which are slightly inclined to each other. Earth swept generally between Mars and the sun on April 8. Moon is opposite the sun on April 14-15; it must be in order to appear full and in order for an eclipse to occur. Thus Mars is near the moon on eclipse night. NASA illustration via honolulu.hawaii.edu. 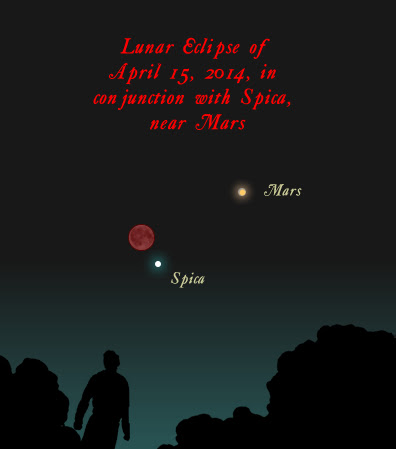 On the night of April 14-15, the planet Mars – closest in 6 years – will be near the eclipsed moon. The star Spica will also be nearby. Illustration via Jay Ryan Classical Astronomy.

Bottom line: The red planet Mars is near the moon on eclipse night, April 14-15, 2014. This post explains why.