Awesome observation! Astronomers used the Hubble Space Telescope to measure the mass of a nearby white dwarf, as it bent the light of a more distant star.

Once again, scientists have confirmed Einstein’s theory of general relativity, which describes the way massive objects – like stars – cause space to bend. For the first time, astronomers have glimpsed the bending of light from a more distant star by a nearby white dwarf. They then used Einstein’s theory to calculate the white dwarf’s mass. They published their study this week (June 7, 2017) in the peer-reviewed journal Science.

Kailash C. Sahu at the Space Telescope Science Institute in Baltimore, Maryland led the international team that conducted this new research. The team used the Hubble Space Telescope to make their observations.

Terry Oswalt of Embry-Riddle Aeronautical University in Florida wrote a related perspective piece in the same issue of Science, and his university produced the explanatory video at the top of this post. Oswalt said in a statement:

The research by Sahu and colleagues provides a new tool for determining the masses of objects we can’t easily measure by other means. The team determined the mass of a collapsed stellar remnant called a white dwarf star. Such objects have completed their hydrogen-burning life cycle, and thus are the fossils of all prior generations of stars in our galaxy, the Milky Way.

Einstein would be proud. One of his key predictions has passed a very rigorous observational test. 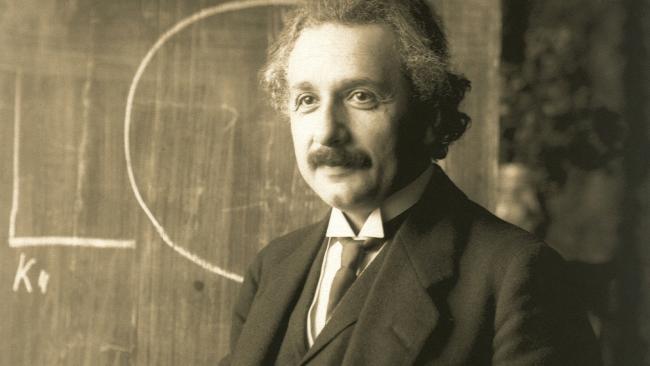 Yup, he was a genius. Image via Wikimedia Commons

Einstein himself believed you could, in theory, obtain mass measurements from gravitational lensing. But his astounding revelations about the universe didn’t include predictions about the many advances in instrumentation that have actually occurred. Thus in a 1936 article in Science, he wrote that because stars are so far apart:

… there is no hope of observing this phenomenon directly.

And yet, of course, the phenomenon of the bending of starlight has been observed, beginning with Arthur Eddington and team’s May 1919 measurement of light bending around our local star, the sun, during a total solar eclipse. That early confirmation of Einstein’s theory made headlines around the world and made Einstein the world’s most famous scientist. 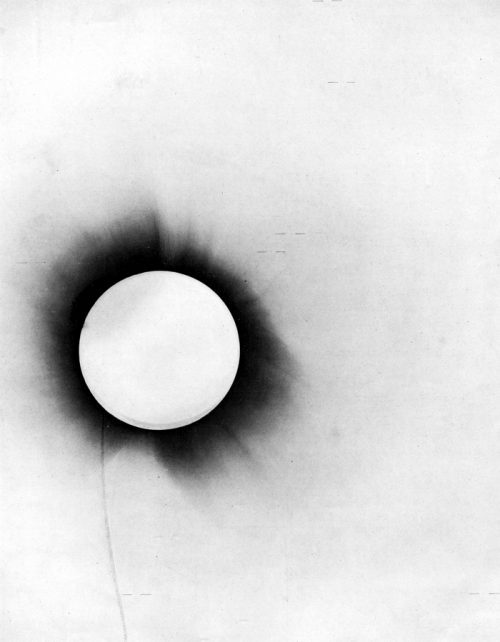 One of Eddington’s photographs from the 1919 total solar eclipse experiment, in which he measured starlight bending around the sun, in the first-ever confirmation of Einstein’s general theory of relativity. Image via Wikimedia Commons.

Since 1979, astronomers have had the technological oomph to observe the bending of light by yet-more-distant objects, starting with SBS 0957+561, aka the Twin Quasar.

In the 1980s, astronomers realized that the combination of CCD imagers and computers would allow the brightness of millions of stars to be measured each night. And since then – in observational programs such as Poland’s Optical Gravitational Lensing Experiment (OGLE), astronomers have discovered hundreds of examples of gravitational lensing and microlensing. 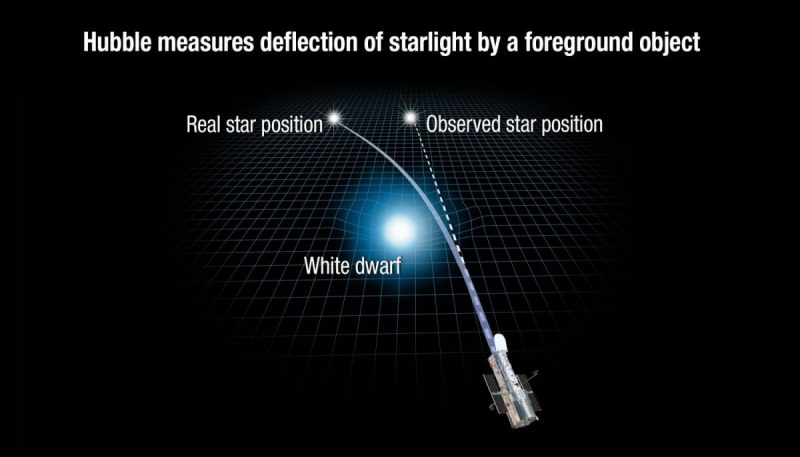 Kailash C. Sahu’s team measured the bending of starlight around a nearby white dwarf. Image via A. Feild (STScI) / NASA, ESA.

The statement featuring Terry Oswalt at Embry-Riddle explained why this new research is different and significant:

When a star in the foreground passes exactly between us and a background star, gravitational microlensing results in a perfectly circular ring of light – a so-called ‘Einstein ring.’

Sahu’s group observed a much more likely scenario: Two objects were slightly out of alignment, and therefore an asymmetrical version of an Einstein ring formed. The ring and its brightening were too small to be measured, but its asymmetry caused the distant star to appear off-center from its true position. This part of Einstein’s prediction is called ‘astrometric lensing’ and Sahu’s team was the first to observe it in a star other than the sun …

Terry Oswalt explained that the finding is important because it “provides a new tool for determining the masses of objects we can’t easily measure by other means.” He said it also opens a new window to understanding “the history and evolution of galaxies such as our own.”

Bottom line: Once again, Albert Einstein’s general theory of relativity has been confirmed, using gravitational microlensing. Astronomers used the Hubble Space Telescope to measure the mass of a nearby white dwarf, as it bent the light of a more distant star.