In 1670, skywatchers saw a nova, a star that appeared where none had been before. Today’s astronomers have learned it was a collision between an aging white dwarf star, and less massive brown dwarf. 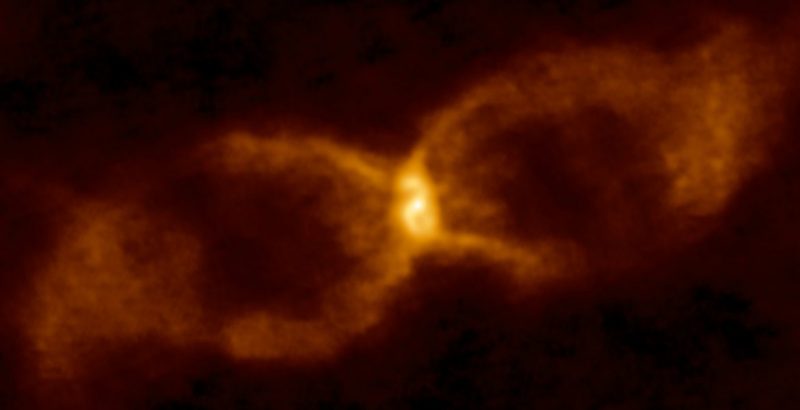 Astronomers now think this hourglass-shaped image of the object known as CK Vulpeculae is the result of a collision of a brown dwarf and a white dwarf. Image via ALMA (ESO/NAOJ/NRAO)/S. P. S. Eyres

In the 1600s, western astronomers were just emerging from centuries of medieval thought, when the heavens were thought to be unchanging. You can imagine their astonishment when – in July of 1670, in what had been a blank, dark sky – some observers witnessed a bright pinprick of light that appeared, faded, reappeared, and then disappeared entirely from view. At that time, astronomers called such an event a nova or new star. This one was located in front of the constellation Cygnus the Swan and so received the name Nova sub Capite Cygni (a New Star below the Head of the Swan). Modern astronomers have learned it wasn’t a new star. It wasn’t even a spectacular collision of two main-sequence stars, as announced in 2015. Instead, using data from the ALMA telescope in Chile, astronomers now believe the event was a collision between an aging white dwarf star and a brown dwarf (star with too little mass to ignite thermonuclear fusion and thereby shine as most stars do).

The object in question is now called CK Vulpeculae.

The new work is based on observations with the Atacama Large Millimeter/submillimeter Array (ALMA) in northern Chile. The astronomers studied the debris from this explosion, which takes the form of dual rings of dust and gas resembling an hourglass with a compact central object (see image at top). Sumner Starrfield of Arizona State University is a co-author on a paper published in the peer-reviewed journal Monthly Notices of the Royal Astronomical Society. He said in a statement:

It now seems what was observed centuries ago was not what we would today describe as a classic ‘nova.’ Instead, it was the merger of two stellar objects, a white dwarf and a brown dwarf. When these two objects collided, they spilled out a cocktail of molecules and unusual isotopes, which gave us new insights into the nature of this object.

How did they conclude that the collision was between a white dwarf and a brown dwarf, and not two main-sequence stars, as had been reported earlier? They did it by studying the light from two more-distant stars, shining behind the the dusty remains of the merger. These studies let the astronomers detect the telltale signature of the element lithium, which is easily destroyed in the interior of a main sequence star, but not inside a brown dwarf. Astronomer Stewart Eyres of the University of South Wales (@astrostewey on Twitter) and lead author on the paper explained:

The presence of lithium, together with unusual isotopic ratios of the elements carbon, nitrogen and oxygen point to material from a brown dwarf star being dumped on the surface of a white dwarf. The thermonuclear ‘burning’ and an eruption of this material resulted in the hourglass we see today.

This is the first time such an event has been conclusively identified. 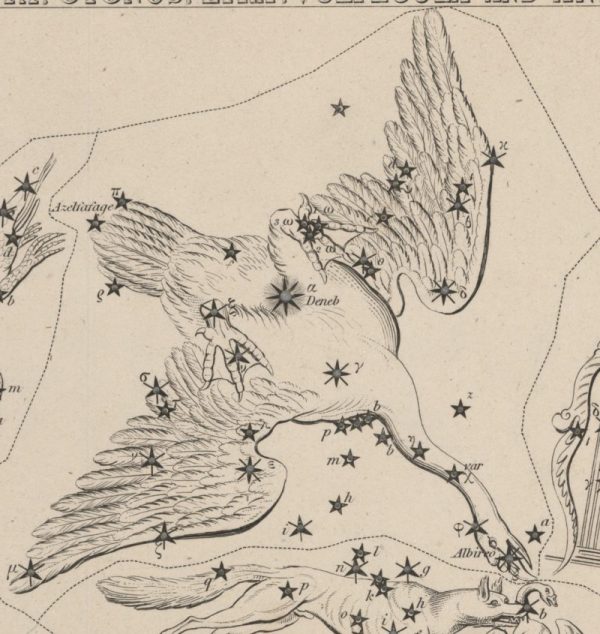 The constellation Cygnus the Swan, with Vulpecula. Image via SkyTonight.org.

Bottom line: In 1670, skywatchers saw a nova, a star that appeared where none had been before. Today’s astronomers have learned it was a collision between an aging white dwarf star, and less massive brown dwarf.