The newly discovered exoplanets orbiting this nearby star are likely to be bathed in high-energy ultraviolet radiation. What would life be like there? An expert explains. 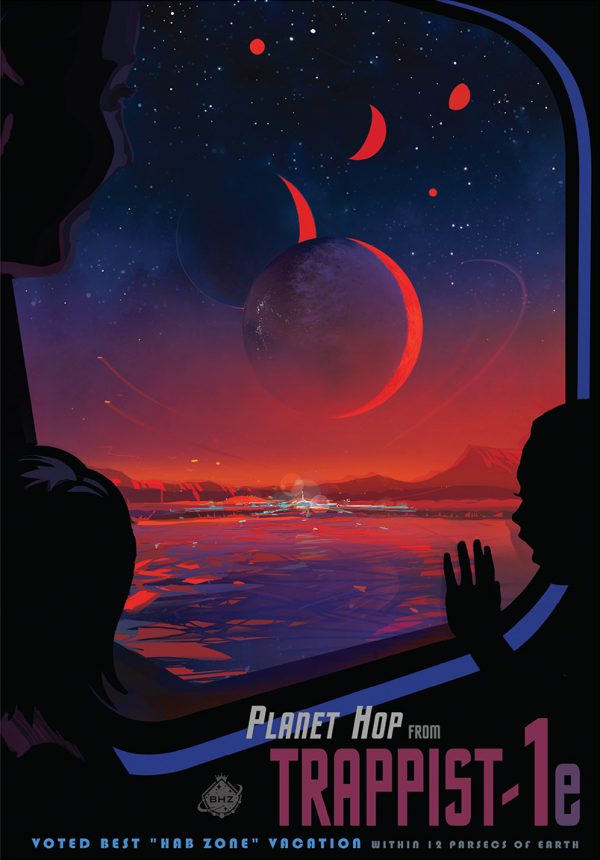 This poster imagines what a future trip to TRAPPIST-1e might be like. Could future visitors from Earth to this world expect to find life? Image via NASA/JPL-Caltech

Only 40 light-years from Earth, the exoplanet system known as TRAPPIST-1 is now known to be orbited by at least seven planets, three of which orbit in this star’s habitable zone. That’s the zone within which liquid water should, in theory, be able to exist. However, these planets are bathed in high-energy ultraviolet radiation. What would life be like near Trappist-1? Lisa Kaltenegger – director of the Carl Sagan Institute at Cornell University – is an expert on exoplanets and their potential to support life beyond Earth. She happens to have two papers completed that speak to this subject – one under review at Monthly Notices of the Royal Society, and one forthcoming in The Astrophysical Journal. Both discuss life under a very high ultraviolet radiation flux environment.

Trappist-1 now holds the record for the most rocky planets in the habitable zone – our solar system only has two – Earth and Mars. Life is a definite possibility on these worlds, but it might look different because there’s likely to be very high ultraviolet radiation flux on the surface of these planets.

How good or bad would such a UV environment be for life? Our paper, currently under review at Monthly Notices of the Royal Society, discusses just this scenario for the Trappist-1 system, examining the consequences of different atmospheres for life in a UV environment.

We find that if the star is active, as indicated by the X-ray flux, then planets need an ozone layer to shield their surface from the harsh UV that would sterilize the surface. If the planets around Trappist-1 do not have an ozone layer (like a young Earth), life would need to shelter underground or in an ocean to survive and/or develop strategies to shield itself from the UV, such as biofluorescence.

Atmospheric biosignatures such as methane, indicating adaptations by life, could be detected by the James Webb Space Telescope, launching in 2018, or the European Extremely Large Telescope, coming online in 2022.

One of Kaltenegger’s papers is called “UV Surface Habitability of the TRAPPIST-1 System;” it’s currently under review at Monthly Notices of the Royal Society. Her second paper is called “Biofluorescent Worlds: Biological fluorescence as a temporal biosignature for flare star worlds,” and it has been accepted and will soon appear in The Astrophysical Journal.

In the video below, Kaaltenegger talks about how scientists will be searching for life on these worlds … and others.

Bottom line: Lisa Kaltenegger – director of the Carl Sagan Institute at Cornell University – discusses the possibility for life on the newly discovered exoplanets orbiting in the habitable zone of TRAPPIST-1.