The nearness of 7 newly found Earth-sized planets – and the smallness their host star – make them perfect targets for the new space telescope that’ll be Hubble’s successor. 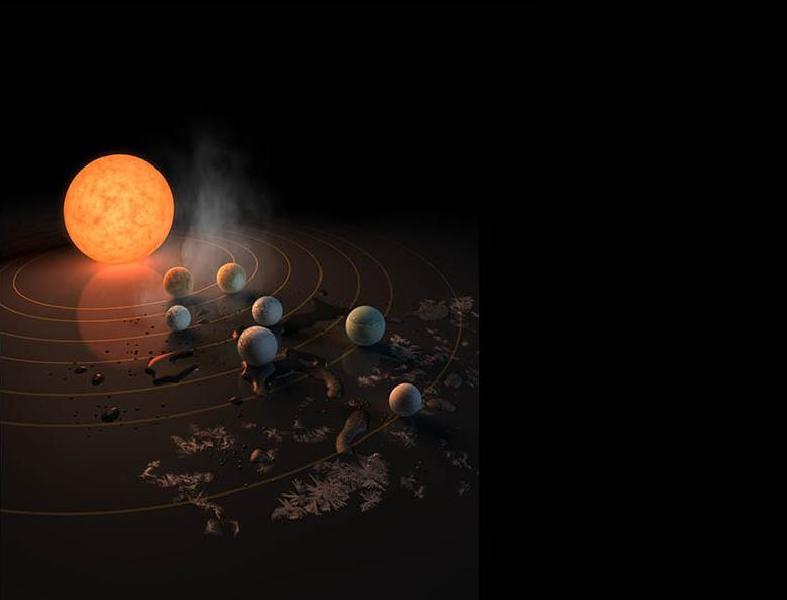 After its 2018 launch, the James Webb Space Telescope will probe the atmospheres of TRAPPIST-1’s 7 Earth-sized planets. It’ll be looking for indicators these worlds can support life. Image via NASA/JPL-Caltech/R. Hurt (IPAC).

On February 22, 2017, astronomers announced the discovery of seven Earth-sized planets around the star TRAPPIST-1, only 40 light-years away. Since then, they’ve been looking at next steps in exploring these worlds, and one has been to think about how the next-generation space telescope – Hubble’s successor, called the James Webb Space Telescope – will be able to help, after its October 2018 launch. Astronomers said last week (March 2, 2017) that it’ll be possible to use the new space telescope to find out if any of these planets might support life.

Sara Seager, astrophysicst and planetary scientist at MIT, commented in a NASA statement:

For thousands of years, people have wondered, are there other planets like Earth out there? Do any support life? Now we have a bunch of planets that are accessible for further study to try to start to answer these ancient questions.

Depending upon their atmospheric composition, at least three of TRAPPIST-1’s planets – e, f and g – could have the appropriate conditions for supporting liquid water. In other words, they orbit in the habitable zone of their star. Because the planets orbit a star that is small, a signal from them will be relatively large, and just strong enough for Webb to detect atmospheric features. Shawn Domagal-Goldman, an astrobiologist at NASA’s Goddard Space Flight Center said: 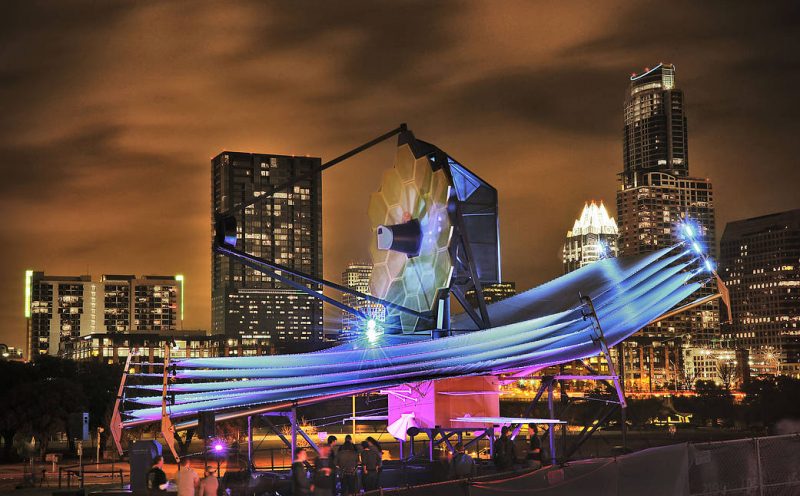 As big as a tennis court and as tall as a 4-story building, a full-scale model of the James Webb Space Telescope model was on display at the March 2013 South by Southwest Interactive Festival in Austin, Texas. The telescope – scheduled for an October 2018 launch – is Hubble’s successor and the largest space telescope to ever be built. Image via NASA. 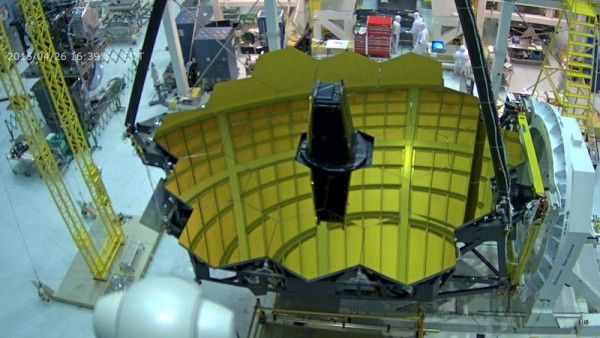 Webb’s mirrors are coated with gold to optimize them for infrared light. Here’s why. Image via NASA.

The James Webb Space Telescope is currently housed at NASA’s Goddard Space Flight Center in Greenbelt, Maryland. The final mirrors in the telescope’s giant segmented mirror were installed a year ago, and now engineers and scientists are testing the telescope. The June 7, 2016 video below is a time-lapse showing some two dozen engineers and technicians in a clean room at NASA’s Goddard Space Flight Center, hard at work installing the package of science instruments on the telescope. Fun, yes?

NASA explained that, in hunting for a potentially life-supporting planet, you need to know more than just the planet’s size or distance from its star. Detecting the relative proportions of certain molecules in a planet’s atmosphere – water, methane, carbon monoxide/dioxide and/or oxygen – could tell researchers whether a planet could support life. The James Webb Space Telescope will have even more powerful infrared observing capabilities that of the Hubble Space Telescope, and those capabilities will aid in detecting and characterising the molecular make-up of the atmospheres of TRAPPIST-1’s planets. Hannah Wakeford, a postdoctoral fellow at Goddard, commented in NASA’s March 2 statement:

These are the best Earth-sized planets for the James Webb Space Telescope to characterize, perhaps for its whole lifetime. The Webb telescope will increase the information we have about these planets immensely. With the extended wavelength coverage we will be able to see if their atmospheres have water, methane, carbon monoxide/dioxide and/or oxygen.

One of Webb’s main goals will be to use spectroscopy – the technique of splitting light into its component color, and analyzing the resulting spectrum. Spectroscopy lets astronomers identify the chemical components in a star, or planetary atmosphere. NASA explained:

Webb will especially seek chemical biomarkers, like ozone and methane, that can be created from biological processes. Ozone, which protects us from harmful ultraviolet radiation here on Earth, forms when oxygen produced by photosynthetic organisms (like trees and phytoplankton) synthesizes in light. Because ozone is largely dependent on the existence of organisms to form, Webb will look for it in alien atmospheres as a possible indicator of life. It will also be able to look for methane which will help determine a biological source of the oxygen that leads to ozone accumulation.

The discovery of the planets in the TRAPPIST-1 system means that Webb will be able to use its immense capabilities on a relatively nearby system.

The number of planets in the system will also enable new research in the field of comparative planetology, which uncovers fundamental planetary processes by comparing different worlds. That means we’ll be able to use this system of planets to understand more about our own Earth.

So – for the sake of TRAPPIST-1’s planets and many other reasons – astronomers are eagerly awaiting Webb’s October 2018 launch.

In the meantime, NASA’s missions like Spitzer, Hubble, and Kepler are now following up on these planets, NASA said.

#TRAPPIST1 is the smallest, nearest star with planets close to Earth-size in the Habitable Zone, that transit. Perfect target for #JWST.

Wow! Nearby TRAPPIST-1 has 7 planets