On Thursday, 2 astronauts will perform a spacewalk. The spacewalk is scheduled to begin at about 12:10 UTC (8:10 a.m. EDT) and will last about 6.5 hours. How to watch live. 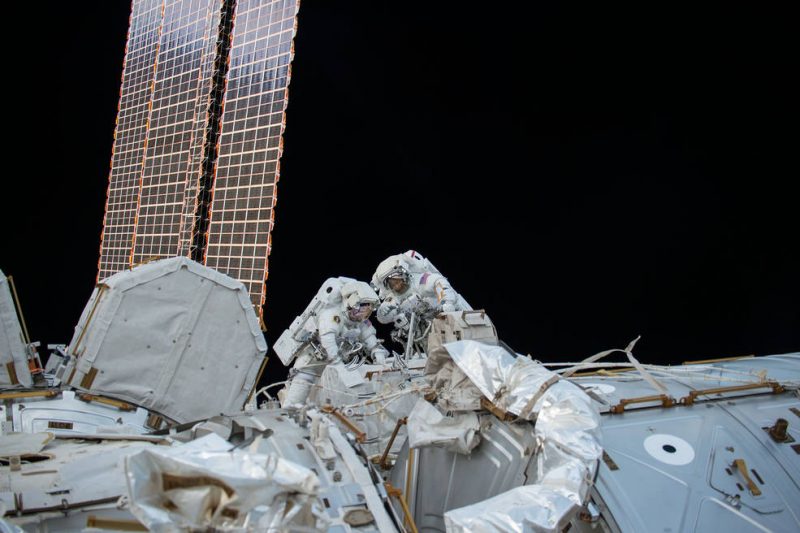 NASA astronauts Mark Vande Hei and Randy Bresnik work outside the International Space Station on October 5, 2017, to replace a part on the station’s robotic arm. Image via NASA.

Two American astronauts will venture outside the International Space Station (ISS) on Thursday, March 29, 2018, for a planned 6.5-hour spacewalk in support of space station assembly, maintenance and upgrades. Live coverage on NASA TV starts at 10:30 UTC (6:30 a.m. EDT) and the spacewalk is scheduled to begin at about 12:10 UTC (8:10 a.m.EDT; translate to your timezone).

The NASA astronauts, Expedition 55 Flight Engineers Drew Feustel and Ricky Arnold, will exit the station’s Quest airlock to install wireless communications equipment, swap out high-definition video cameras, and remove aging hoses from a cooling component on the station’s exterior. The excursion will be the seventh in Feustel’s career and the third for Arnold. According to a NASA statement:

They will install wireless communications equipment on the station’s Tranquility module to enhance payload data processing for the ECOsystem Spaceborne Thermal Radiometer Experiment on Space Station (ECOSTRESS) experiment being flown to the station on a future SpaceX Dragon cargo spacecraft. The experiment will measure the temperature of plants on Earth to better understand how much water they need and how they respond to stress.

Bottom line: Two International Space Station (ISS) astronauts will perform a spacewalk on March 29, 2018. The spacewalk is scheduled to begin at about 12:10 UTC (8:10 a.m. EDT) and will last about 6.5 hours. How to watch live.