The OSIRIS-REx spacecraft is scheduled to rendezvous with its targeted asteroid, Bennu, on Monday, December 3, 2018, at approximately 17:00 UTC (noon EST). 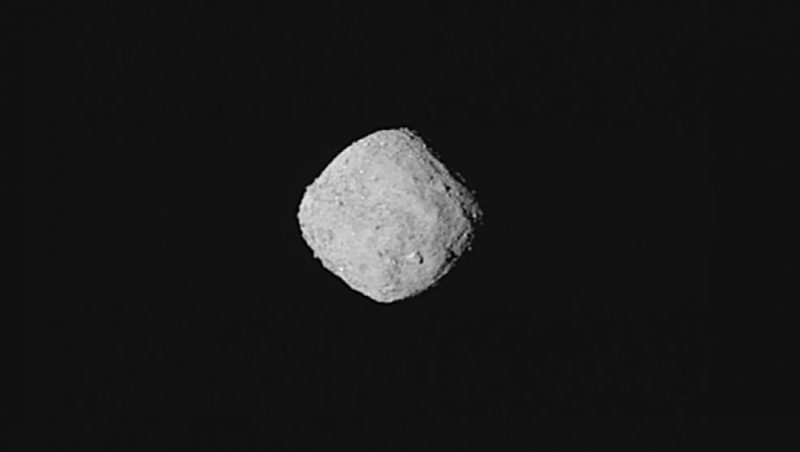 This “super-resolution” view of asteroid Bennu was created using 8 images obtained by NASA’s OSIRIS-REx spacecraft on October 29, 2018, from a distance of about 205 miles (330 km). Image via NASA/Goddard/University of Arizona.

NASA’s OSIRIS-REx spacecraft is scheduled to rendezvous with its targeted asteroid, Bennu, on Monday, December 3, 2018, at approximately 17:00 UTC (noon EST). Translate UTC to your time.

This animation consists of 5 of the 1st images of asteroid Bennu via the OSIRIS-REx mission, acquired August 17, 2018, at 1.4 million miles (2.3 million km), or almost 6 times the distance between the Earth and moon. The asteroid is visible as a moving object against the stars in front of the constellation Serpens. The spacecraft is due to arrive at the asteroid on December 3, 2018. Image via NASA/Goddard/University of Arizona.

OSIRIS-REx (Origins, Spectral Interpretation, Resource Identification, Security-Regolith Explorer) launched in September 2016 and has been slowly approaching Bennu. OSIRIS-REx is NASA’s first mission to visit a near-Earth asteroid, survey the surface, collect a sample and deliver it back to Earth. The spacecraft will spend almost a year surveying the asteroid with the goal of selecting a location that is safe and scientifically interesting to collect the sample.

That asteroid sample is expected to return to Earth via free fall from space, until it reaches an altitude of 20.8 miles (33.5 km), when a first parachute will deploy. At 1.9 miles (3 km), the main parachute will be released, bringing the capsule with its precious cargo from Bennu in for a soft landing in the Utah desert on September 24, 2023.

Bottom line: The OSIRIS-REx spacecraft is scheduled to rendezvous with its targeted asteroid, Bennu, on Monday, December 3, 2018, at approximately 17:00 UTC (noon EST).