The Hubble Space Telescope is gazing along the future trajectories of the 2 Voyager spacecraft – launched in 1977 – now heading into uncharted interstellar space. 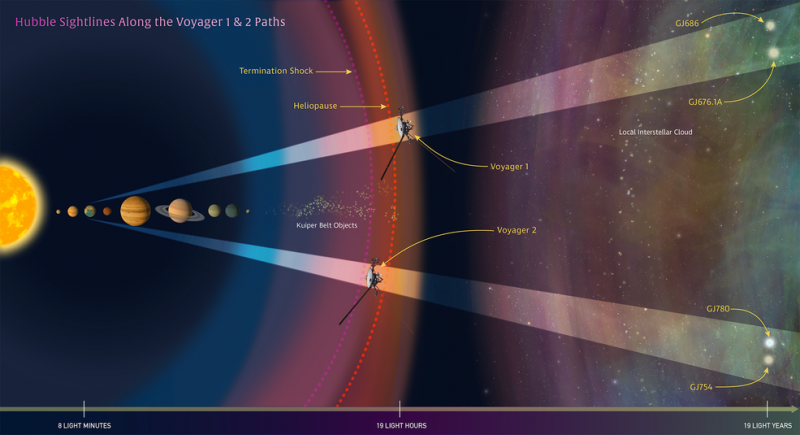 View larger. | Artist’s concept of the paths of the Voyager 1 and 2 spacecraft on their journey through our solar system and out into interstellar space. The Hubble Space Telescope is gazing at 2 sight lines (the twin cone-shaped features) along each spacecraft’s star-bound route. Each sight line stretches several light-years to nearby stars. Image via NASA, ESA, and Z. Levay (STScI).

NASA launched the twin Voyager 1 and 2 spacecraft in 1977. Both explored the outer planets Jupiter and Saturn, and Voyager 2 went on to visit Uranus and Neptune. Now both Voyagers are heading beyond our solar system, into the space between the stars. Voyager 1 officially became the first earthly craft to leave the solar system in 2013. Last week (January 6, 2017), at the 229th meeting of the American Astronomical Society in Grapevine, Texas, astronomers spoke of using the Hubble Space Telescope to provide what they called a road map for the Voyagers. A NASA statement said:

Even after the Voyagers run out of electrical power and are unable to send back new data, which may happen in about a decade, astronomers can use Hubble observations to characterize the environment of through which these silent ambassadors will glide.

This is a great opportunity to compare data from in situ measurements of the space environment by the Voyager spacecraft and telescopic measurements by Hubble. The Voyagers are sampling tiny regions as they plow through space at roughly 38 thousand miles per hour [61 thousand km/hr]. But we have no idea if these small areas are typical or rare.

The Hubble observations give us a broader view because the telescope is looking along a longer and wider path. So Hubble gives context to what each Voyager is passing through. 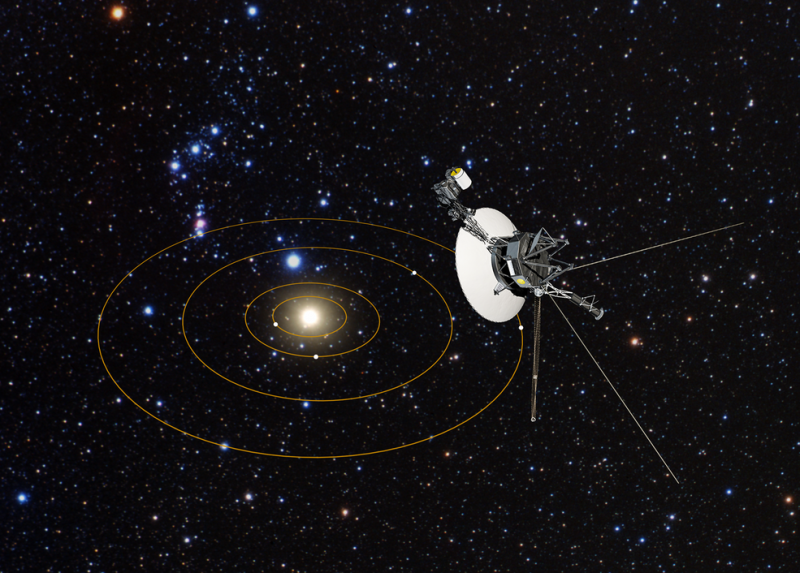 Voyager 1 is now 13 billion miles (21 billion km) from Earth, making it the farthest and fastest-moving human-made object ever built. It’s now zooming through interstellar space, the region between the stars filled with gas, dust and material recycled from dying stars. In about 40,000 years, long after both spacecraft are no longer operational, Voyager 1 will pass within 1.6 light-years of the star Gliese 445, in the constellation Camelopardalis.

For the next 10 years, the Voyagers will be making measurements of interstellar material, magnetic fields and cosmic rays along their trajectories. Hubble complements the Voyagers’ observations by gazing at two sight lines along each spacecraft’s path to map interstellar structure along their star-bound
routes. Each sight line stretched several light-years to nearby stars. Sampling the light from those stars, Hubble’s Space Telescope Imaging Spectrograph measures how interstellar material absorbs some of the starlight, leaving telltale spectral fingerprints.

Hubble found that Voyager 2 will move out of the interstellar cloud that surrounds our solar system in a couple thousand years. The astronomers, based on Hubble data, predict that the spacecraft will spend 90,000 years in a second cloud and pass into a third interstellar cloud.

An inventory of the clouds’ composition reveals slight variations in the abundances of the chemical elements contained in the structures.

These variations could mean the clouds formed in different ways, or from different areas, and then came together. NASA also said:

An initial look at the Hubble data also suggests that the sun is passing through clumpier material in nearby space, which may affect the heliosphere, the large bubble containing our solar system that is produced by our sun’s powerful solar wind. At its boundary, called the heliopause, the solar wind pushes outward against the interstellar medium. Hubble and Voyager 1 made measurements of the interstellar environment beyond this boundary, where the wind comes from stars other than our sun.

View larger. | This picture of a crescent-shaped Earth and moon – 1st of its kind ever taken by a spacecraft – was recorded September 18, 1977, by Voyager 1 at a distance of 7.25 million miles (11.66 million km) from Earth. The moon is at the top of the picture and beyond the Earth as viewed by Voyager. Image via NASA.

Bottom line: The Hubble Space Telescope is gazing along the future trajectories of the 2 Voyager spacecraft.