Physicist Andrei Dmitriyevich Linde is one of the main authors of inflationary universe theory. Watch his emotions as he learns his theory was proven true this week.

Professor Andrei Dmitriyevich Linde is one of the main authors of the inflationary universe theory that was confirmed this week. Watch his emotions as assistant Professor Chao-Lin Kuo surprises him with the news of the evidence that supports cosmic inflation theory.

The discovery, made by Kuo and his colleagues at the BICEP2 experiment, represents the first images of gravitational waves, or ripples in space-time. These waves have been described as the “first tremors of the Big Bang.”

Read more about it: First direct evidence of cosmic inflation 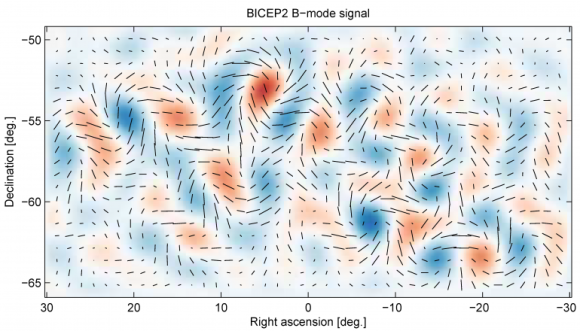 The signature of primordial gravitational waves, as seen in the cosmic microwave background in the image, are twisting patterns known as B-mode polarization. Image credit: BICEP Project