If you were standing on planet Mars, how would it look to see a Mars moon move across the sky? Well, here’s how.

If you were standing on planet Mars, how would it look to see a Mars moon move across the sky? Well, here’s how.

In this 30-second video, the NASA rover Opportunity looks skyward from the Mars surface and watches Phobos, the larger of the two moons of Mars, passing across the Martian sky. It’s that little, white dot that moves from near the center to the top. Look what a tiny dot Phobos is in the Martian sky compared to our big ole moon!

NASA’s Curiosity Mars rover pointed its camera straight upward shortly after sunset. Phobos first appears near the lower center of the view and moves toward the top of the view. The clip runs at accelerated speed; the amount of time covered in it is about 27 minutes.

The 86 frames combined into this clip were taken by the rover’s Navigation Camera (Navcam) on the 317th Martian day of Curiosity’s work on Mars (June 28, 2013, PDT). The apparent ring about halfway between the center of the frames and the edges is an artifact of the imaging due to scattering of light inside the camera. 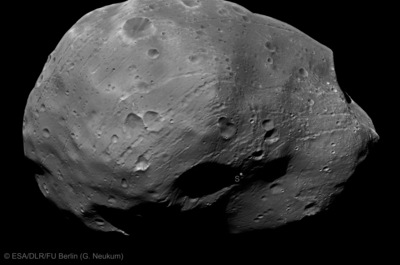 The two Martian moons are tiny. The larger moon, Phobos, is only about about 14 miles across. And the smaller, Deimos, is about half that size. They orbit Mars more closely than our moon orbits Earth, but because they’re so tiny they appear smaller than our moon does.

Phobos is the closer of the two moons. It zooms around Mars two and a half times every Martian day. Because it out-races Mars’ rotation, Phobos rises in the west and sets in the east. Phobos appears about a third as large in the Martian sky as our moon does in Earth’s sky. What’s more, Phobos isn’t round like our moon. It resembles a shining gray-white potato.

Another odd thing about Phobos – it’s not visible all over Mars. Phobos orbits above Mars’ equator so near the planet that it’s always hidden beneath the horizon in the Martian polar regions. Our moon, by contrast, can be viewed anywhere on Earth.

Phobos has a nearly circular orbit along Mars’ equator. It orbits Mars so closely, however, that its apparent size changes for viewers on the equator. Near the horizon Phobos appears smaller – as it climbs in the sky, Phobos comes nearer the viewer until it’s directly overhead. Then it appears larger.

For observers on the Martian equator, Phobos eclipses the sun nearly every day. Eclipses last only about 30 seconds, so quickly does Phobos race across the sky. Because Phobos covers only a fraction of the sun’s disk, eclipses are never total.