See what scientists saw this week at a meeting in Vienna. It’s a 3-D fly-around of Jupiter’s north pole, showing its central cyclone and the 8 smaller cyclones encircling it.

Data for the dramatic imagery used in the animated 3-D fly-around of Jupiter’s north pole, above, was collected by the Juno spacecraft a year ago, in its fourth sweep past the planet. Juno mission scientists shared this movie this week (April 11, 2018) during the European Geosciences Union General Assembly (EGU2018) in Vienna, Austria. Among other things, the movie shows the densely packed cyclones and anticyclones at Jupiter’s poles. NASA said:

Juno mission scientists have taken data collected by the spacecraft’s Jovian InfraRed Auroral Mapper (JIRAM) instrument. Imaging in the infrared part of the spectrum, JIRAM captures light emerging from deep inside Jupiter equally well, night or day. The instrument probes the weather layer down to 30 to 45 miles (50 to 70 km) below Jupiter’s cloud tops. The imagery will help the team understand the forces at work in the animation – a north pole dominated by a central cyclone surrounded by eight circumpolar cyclones with diameters ranging from 2,500 to 2,900 miles (4,000 to 4,600 km).

Alberto Adriani, Juno co-investigator from the Institute for Space Astrophysics and Planetology in Rome, Italy, said:

Before Juno, we could only guess what Jupiter’s poles would look like.

The Juno spacecraft has been in orbit around Jupiter since 2016. It’s in a highly elliptical polar orbit, taking it to within 2,600 miles (4,200 km) of the planet and then out to 5 million miles (8.1 million km), far beyond the orbit of Callisto, the most distant of Jupiter’s four large Galilean moons. Thus Juno sweeps closest to Jupiter only every 53 days. The spacecraft is expected to complete 12 science orbits of the giant planet before the end of its budgeted mission plan in July 2018. 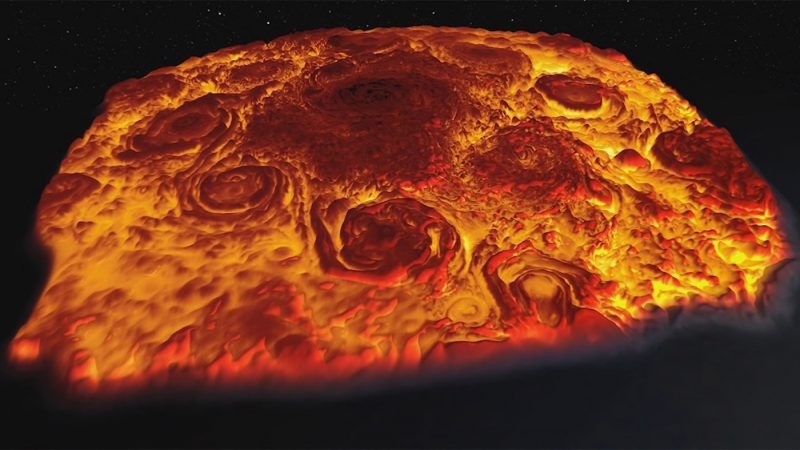 Bottom line: This week, scientists meeting at EGU2018 in Vienna, Austria, presented this animated 3-D fly-around of Jupiter’s north pole, made possible by data collected via the Juno spacecraft.