Launched in 2018, the BepiColombo mission will have the first of its 2 encounters with Venus – while on its way to Mercury – in October 2020. Coordinated observations at that time will involve 2 spacecraft and multiple ground-based telescopes. 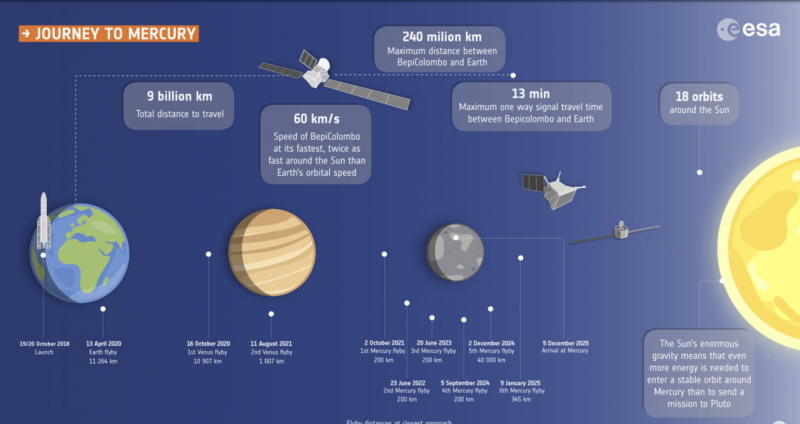 View larger. | This graphic depicts BepiColombo’s long path to Mercury. The spacecraft launched in 2018. It’ll fly by Earth once, Venus twice and Mercury 6 times before entering orbit in December 2025. Image via ESA.

In October 2020, Venus will be the focus of an international campaign of coordinated observations, involving the ESA-JAXA BepiColombo and JAXA Akatsuki spacecrafts, as well as multiple ground-based telescopes and planetary scientists around the world. The collaboration aims to shed new light on the thick and complex atmosphere of Venus. Astronomers announced the plans for the campaign September 19, 2019 at the EPSC-DPS Joint Meeting in Geneva, Switzerland.

On October 15, 2020, the ESA-JAXA BepiColombo spacecraft will pass close to Venus in the first of two flybys of the planet during the mission’s long journey to Mercury. The encounter, said ESA:

… will provide an opportunity to cross-check the accuracy of BepiColombo’s instrumentation with that of JAXA’s Venus orbiter, Akatsuki, and for the two missions to work together with Earth-based observers to study Venus’ atmosphere from multiple viewpoints and at different scales.

Akatsuki, launched in May 2010, is currently the only spacecraft in orbit around Venus. The mission arrived in December 2015 and monitors the planet every two hours from an elliptical orbit that takes it from 620 miles (1,000 km) at its closest approach to 205,000 miles (330,000 km) at its furthest point.

Akatsuki today, September 25, 2019. This Japanese spacecraft is also called the Venus Climate Orbiter. Launched in 2010, it originally failed to enter orbit around Venus late that year. It orbited the sun for 5 years, until JAXA engineers were able – through firings of its thrusters – to place it into a highly elliptical Venus orbit in 2015. It’s currently the only spacecraft orbiting Venus. Image via JAXA.

BepiColombo was launched in 2018. It’ll reach Mercury – its main target – in 2025. BepiColombo will use encounters with Venus in October 2020 and August 2021 to help it spiral onto an orbital path where it can catch up with fast-moving Mercury, which whizzes round the sun every 88 days.

At the time of the spacecraft’s October 2020 flyby, BepiColombo will be at 6,637 miles (10,681 km) from Venus’ surface – approximately 30 times closer to the planet than Akatsuki, which will be at its peak distance. This means that BepiColombo will be able to make close up observations while Akatsuki will capture processes at a global scale.

The BepiColombo mission consists of two scientific orbiters, ESA’s Mercury Planetary Orbiter (MPO) and JAXA’s Mercury Magnetospheric Orbiter (MMO, renamed at launch ‘Mio’), which are designed to explore Mercury and its environment. According to ESA:

Eight out of the eleven instruments onboard the MPO will be able to operate at Venus. While this suite of sensors has been designed to study the rocky, atmosphere-free environment at Mercury, the MPO instrumentation will be able to contribute valuable science at Venus during the flyby. 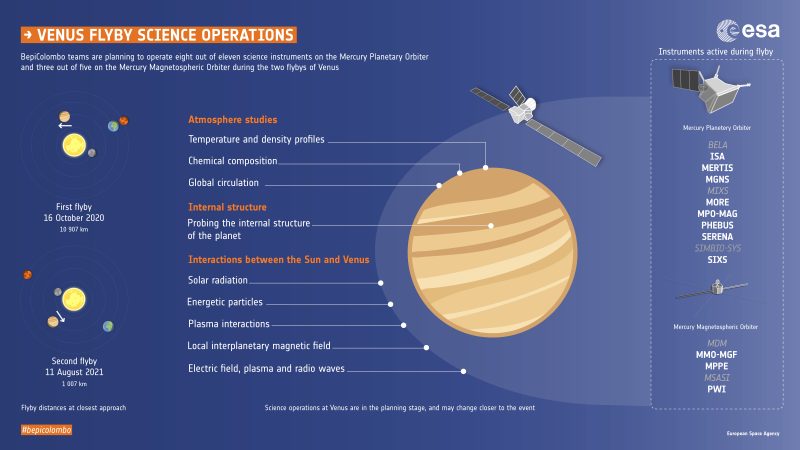 View larger. | Graphic highlighting some of the science themes that may be possible to study during the two flybys of Venus. Image via ESA.

In particular, MPO’s thermal infrared spectrometer and radiometer (MERTIS) will provide temperature and density profiles and study the chemical composition and cloud cover in the mid-altitude atmosphere. This will be the first time observations of this kind have been made since the Russian Venera 15 mission in 1983. MPO’s UV spectrometer (PHEBUS) may provide UV range reflectivity from the clouds and emissions from the upper atmosphere while its approaching to Venus. Six other instruments on both MPO and Mio will study the interaction between the sun and Venus’s upper atmosphere. The magnetometers on each spacecraft will study the magnetic environment.

The infrared and ultraviolet instruments onboard BepiColobo will make coordinated observations with the corresponding cameras onboard Akatsuki. Earth-based telescopes, including the Canada France Hawaii Telescope, the NASA Infrared Telescope Facility, as well as the Earth-orbiting Hisaki ultraviolet astronomy satellite, will contribute a different viewing perspective and enable global mapping of atmospheric features at Venus.

The opportunity to use all these instruments simultaneously will give us access to multiple wavelengths to probe different altitudes of the atmosphere and to distinguish the different gases present … The different viewing angles and distances of all the spacecraft and telescopes involved will enable us to see what’s happening on the dayside and the nightside of the planet and how processes evolve over time, which can be missed by just one mission. 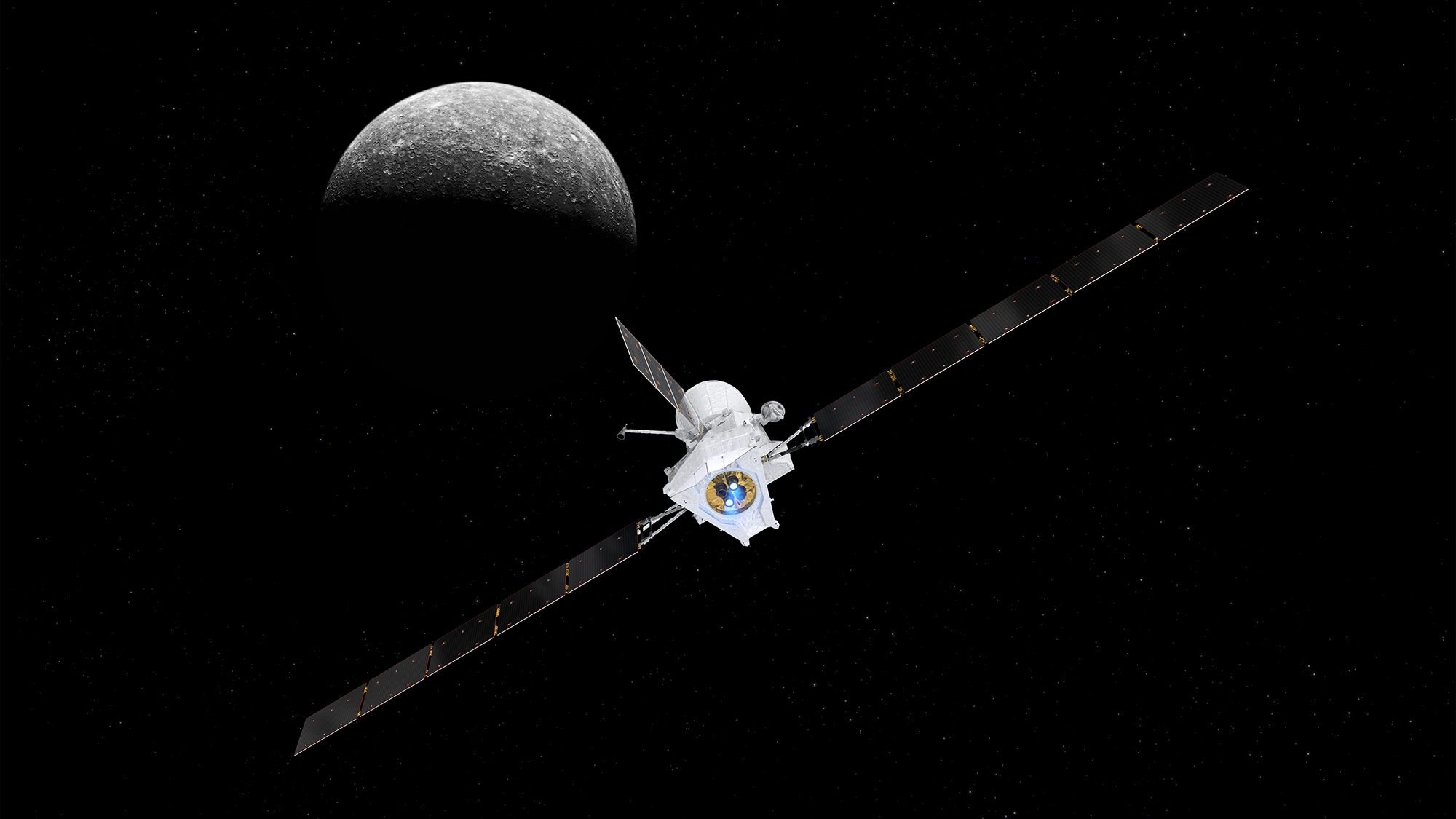