If we wanted to hide Earth from alien civilizations, could we do it? Apparently, we could, according to new work by two scientists at Columbia University. 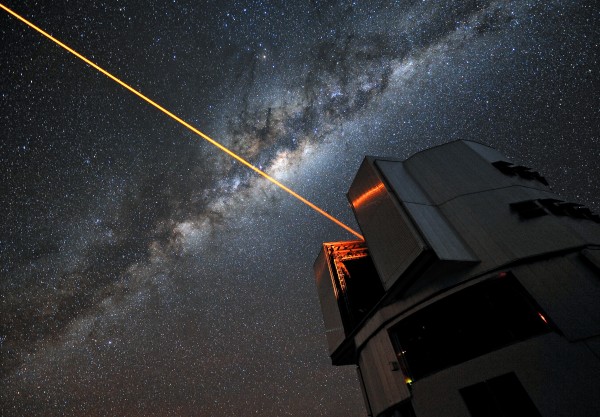 A 22W laser used for adaptive optics on the Very Large Telescope in Chile. A suite of similar lasers could be used to alter the shape of a planet’s transit for the purpose of broadcasting or cloaking the planet. Image via ESO / G. Hüdepohl

In a paper published on March 30, 2016 in Monthly Notices of the Royal Astronomical Society, two astronomers at Columbia University in New York propose that humanity could use lasers to conceal the Earth from searches by advanced extraterrestrial civilizations.

The new work is in line with suggestions by several prominent scientists, including Stephen Hawking, who have cautioned against humanity’s broadcasting its presence to intelligent life on other planets, lest those civilizations be warlike and desirous of Earth resources.

And it’s in line with an abundance of work over past decades in which earthly astronomers have sought distant planets in our Milky Way galaxy. A primary method for finding these exoplanets is the transit method, which is a high-tech search for a minute dip in starlight when a planet moves directly in front of the star it orbits. Transits are the main way that the Kepler mission and similar projects have discovered some 2,000 planets orbiting distant suns. So far, a few tens of these worlds appear to be similar in size to the Earth.

The suggestion for Earth-cloaking by the Columbia astronomers supposes that other civilizations might also try to find Earth-like planets using the transit method.

The paper authors, Columbia University Professor David Kipping and graduate student Alex Teachey, speculate that alien scientists using this approach would clearly see it in the habitable zone of the sun, where temperatures allow water to exist in liquid form, making it promising place for life as we know it.

How could we hide our entire world, assuming we want to?

These authors suggest that Earth transits could be masked by controlled laser emission, with the beam directed at the star where the aliens might live, assuming we know where they live.

When the transit takes place, the laser would be switched on to compensate for the dip in light.

Sound far-fetched? In practical terms, it may be, and so the work may serve best as a thought experiment, as we contemplate the possibility of billions of exoplanets in our Milky Way, some fraction, perhaps, inhabited.

According to these authors, emitting a continuous 30 MW laser for about 10 hours, once a year, would be enough to eliminate the transit signal, at least in visible light. The energy needed is comparable to that collected by the International Space Station (ISS) in a year.

A chromatic cloak, effective at all wavelengths, would be more challenging, they say. It would need a large array of tunable lasers with a total power of 250 MW. Teachey said:

Alternatively, we could cloak only the atmospheric signatures associated with biological activity, such as oxygen, which is achievable with a peak laser power of just 160 kW per transit. To another civilization, this should make the Earth appear as if life never took hold on our world.

As well as cloaking our presence, the lasers could also be used to modify the way the light from the sun drops during a transit to make it obviously artificial, and thus broadcast our existence. The authors suggest that we could transmit information along the laser beams at the same time, providing a means of communication. Kipping said:

There is an ongoing debate as to whether we should advertise ourselves or hide from advanced civilizations potentially living on planets elsewhere in the galaxy. Our work offers humanity a choice, at least for transit events, and we should think about what we want to do.

And here’s another idea. Given that humanity is already capable of modifying transit signals, it may just be that aliens have had the same thought, suggest the two scientists.

They propose that the Search for Extraterrestrial Intelligence (SETI), which mostly currently looks for alien radio signals, could be broadened to search for artificial transits.

Bottom line: Two astronomers from Columbia University suggest humanity could use lasers to conceal the Earth from searches by advanced extraterrestrial civilizations in a paper published March 30, 2016in Monthly Notices of the Royal Astronomical Society.