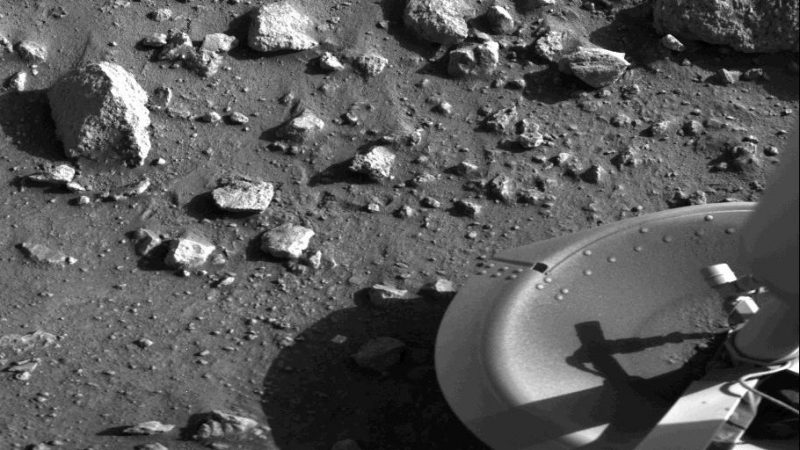 View full image. | First photograph ever taken from Mars’ surface, by Viking 1 shortly after it landed on July 20, 1976. One of the lander’s footpads is seen at the lower right. Image via NASA.

July 20, 1976. On this date, a spacecraft from Earth made our world’s first fully successful soft-landing on the surface of the planet Mars. The Viking 1 lander set down in Mars’ northern hemisphere, at 22.48° North, 47.97° West, in a flat lowland region that we call Chryse Planitia. The lander set down on Mars’ surface at 1153 UTC on July 20, 1976 and promptly captured the first image taken from Mars surface, of the lander’s own foot. See the image above.

Within 24 hours, we had the first color image from Mars’ surface. The image revealed Chryse Planitia as a rolling, boulder-strewn plain with scattered dusty dunes and outcrops of bedrock.

In other words, it revealed a landscape on another world beyond our Earth and moon system, the first ever seen. 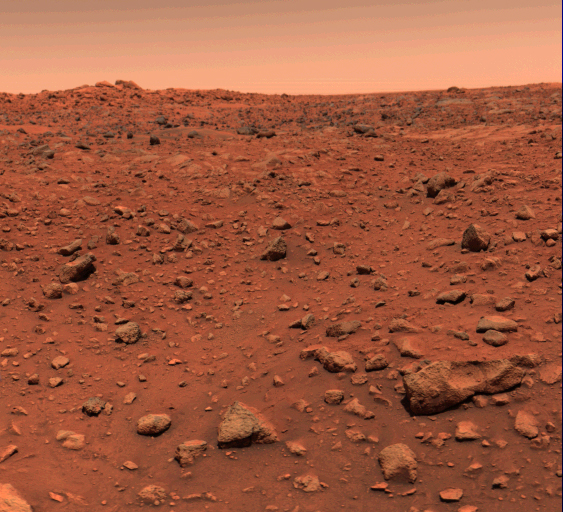 First color picture from Mars’ surface – July 21, 1976 – by Viking 1. Do you remember when this image came in? I do, and it was mind-blowing. Image via NASA.

Viking 1 had been launched nearly a year earlier, on August 20, 1975 from Cape Canaveral Air Force Station, Florida. It was the first of a two-part mission to investigate the Red Planet and search for signs of life. Viking 2 had launched about a month after Viking 1 and arrived about a month later.

Both Vikings consisted of both an orbiter and a lander designed to take high-resolution images, and study the Martian surface and atmosphere.

Viking 1 didn’t unambiguously find life on Mars (although some still argue that it might have), but it did rack up an impressive series of firsts, including the gathering of the first Martian soil sample using the spacecraft’s robot arm and a special biological laboratory. It also helped characterize Mars as a cold planet with volcanic soil and a thin, dry carbon dioxide atmosphere. It provided strong evidence for ancient Martian river beds and vast flooding, and it observed Mars’ seasonal dust storms, pressure changes, and the movement of atmospheric gases between Mars’ polar caps.

The Viking 1 lander operated on Mars’ Chryse Planitia for more than six years, outliving Viking 2 by a couple of years. Its mission ended on November 13, 1982.

By the way, the Viking 1 orbiter captured another image of historic interest on July 25, 1976. It was the so-called Face on Mars, which turned out to be a natural feature, but which – at the time – caused many to hypothesize a work of an extraterrestrial civilization. Now the “face” has been accepted by most as an optical illusion, an example of the psychological phenomenon of pareidolia. 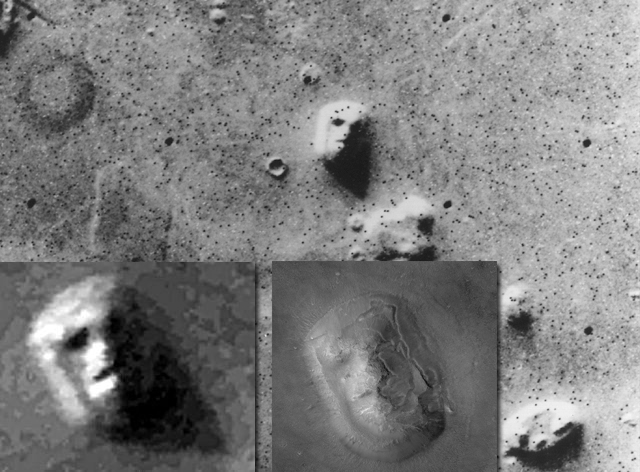 The Viking 1 orbiter spawned the Face on Mars controversy with the image (top) taken on July 25, 1976. The “face” appeared in later spacecraft images as a natural feature. Image via NASA.

View a gallery of images taken by Viking 1

Bottom line: July 20, 1976 is the 40th anniversary of the first fully successful soft landing on Mars’ surface, by the Viking 1 spacecraft.