Not long ago, we couldn’t see planets orbiting distant stars at all. Now astronomers have captured the passage of exoplanet Beta Pictoris b into the glare of its star … then its re-emergence 2 years later. 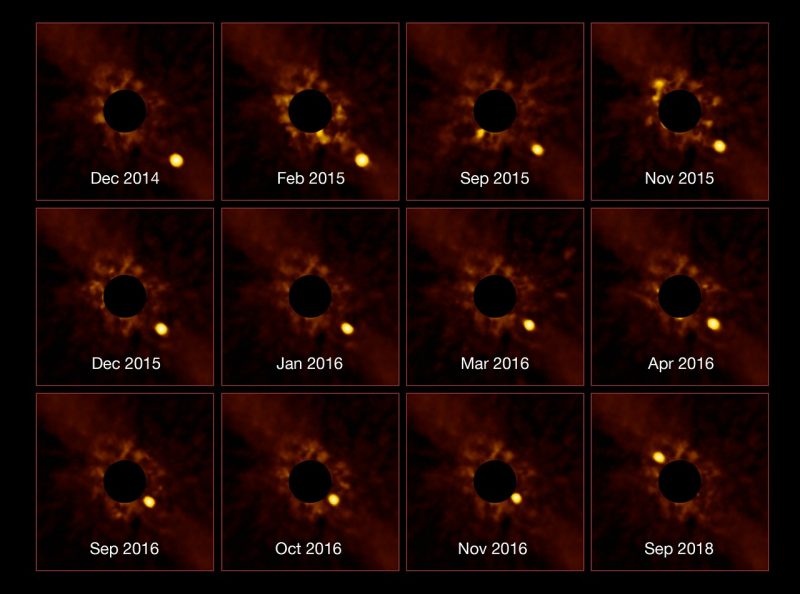 View larger. | Exoplanet Beta Pictoris b moving around its parent star, from December 2014 until it disappeared into the star’s glare in late 2016. Then, 2 years later, astronomers saw it re-emerge on the other side of its star. Notice the planet’s position in the bottom right image, in contrast to the others! Image via ESO/Lagrange/SPHERE consortium.

The European Southern Observatory (ESO) said on November 12, 2018, that its Very Large Telescope has captured an unprecedented series of images showing the passage of the exoplanet Beta Pictoris b around its parent star. The images are above. They’re amazing on their face, but especially when you notice the location of the exoplanet in the bottom right image – the one from September 2018 – in contrast to all those that came before. In other words, this planet went into the glare of its star for about two years. We couldn’t see it at all then. But now it has re-emerged on the opposite side of its star, as any respectable world moving in orbit would do.

We know worlds in space do this, but to see it! That’s something new.

It wasn’t until the early 1990s that astronomers began finding planets orbiting distant suns. Now – despite the conjecture that there might be some billion planets in our Milky Way galaxy alone – we’ve managed to discover only several thousand exoplanets. It’s finding them in the glare of their stars that has been the challenge. By their nature, stars produce light; planets don’t. Planets only shine with the reflected light from their stars. So spotting them in their stars’ glare was a major challenge to astronomers for decades.

And it’s still a challenge, although – as you can see from this stunning image – the technologies have vastly improved.

Beta Pictoris b is a young massive exoplanet, initially discovered via direct imaging in 2008 using ESO’s NACO instrument at the Very Large Telescope. Most exoplanets are discovered when they transit, or pass in front of, their stars along our line of sight. But, from our earthly perspective, Beta Pictoris b doesn’t quite transit, so it had to be found via direct imaging. ESO said:

The same science team [that discovered it] since tracked the exoplanet from late 2014 until late 2016, using the Spectro-Polarimetric High-contrast Exoplanet REsearch instrument (SPHERE) — another instrument on the Very Large Telescope.

Beta Pictoris b then passed so close to the halo of the star that no instrument could resolve them from one another. Almost two years later, after seeming to merge into the image of the star, Beta Pictoris b has now emerged from the halo. This reappearance was captured again by SPHERE … [which] specializes in direct imaging, hunting for exoplanets by taking their photographs. This extraordinarily challenging endeavor provides us with clear images of distant worlds such as Beta Pictoris b, 63 light-years away.

Beta Pictoris b orbits its star at a distance similar to that between the sun and Saturn [approximately 800 million miles or 1.3 billion kilometers], meaning it’s the most closely orbiting exoplanet ever to have been directly imaged. The surface of this young planet is still hot, around 1,500 degrees Celsius [2,700 degrees Fahrenheit], and the light it emits enabled SPHERE to discover it and track its orbit, seeing it emerge from its passage in front of its parent star.

ESO has also created a timelapse video from these images, which you can see here. Enjoy!

Bottom line: Stunning new sequence of images from ESO’s SPHERE instrument, showing the passage of exoplanet Beta Pictoris b into the glare of its star and then, two years later, re-emerging.