Space junk headed for a cascade of collisions

When objects in Earth orbit collide, they create thousands of orbiting fragments. Then, the fragments collide.

It’s time to do something about space debris, according to an announcement on the closing day of Europe’s largest-ever space-debris conference, held this week (April 22-25, 2013) in Darmstadt, Germany. About 300 experts gathered to talk about the problem, and, not surprisingly, they concluded that spacefaring nations need to take space debris seriously, because the problem is getting worse. These experts surely believe that safe disposal techniques should be implemented when space missions end, but they said future missions are not the only problem. Collisions between existing orbiting debris also play a key role. When two objects in Earth orbit collide, they can create thousands of orbiting fragments, which stay in orbit and dramatically increase the rate of future collisions. Experts now speak of a collisional cascading effect in which the potential for future collisions between space junk could ramp up in an alarming way.

These experts say that current levels of space debris – and the increase in debris as collisions occurs – mean that space faring countries need to begin removing debris from orbit. 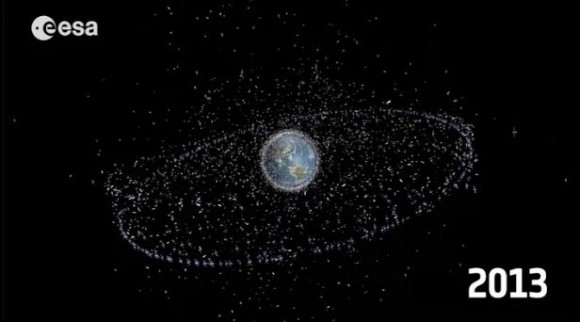 There are 17,000 objects in Earth orbit currently being monitored. Only 7% of them are functioning satellites.

The story of space debris is one of unintended consequences. For the past 60 years, we have been placing satellites in near-Earth space, which now serve a variety of earthly needs, from communications to weather forecasting to television, the environment, navigation and more.

In 2013, experts estimate that 29,000 objects larger than 10 centimeters (4 inches) are orbiting Earth. Only 17,000 of these are being tracked from the ground. Only 7% of monitored satellites are functioning objects, according to the European Space Agency.

There have been four major collisions already in near-Earth orbit, and the most serious of them – which happened on February 10, 2009 between an iridium satellites and a defunct Soviet Kosmos satellite – illustrates why we can’t continue to ignore the existing debris orbiting Earth. These two satellites were moving relative to each other at 42,000 kilometers per hour. When they collided, what had been two orbiting objects fragmented into some 2,000 pieces of debris that can now be tracked from the ground using radar.

The high speeds of orbiting objects in space mean that even small pieces of debris can do damage – and create even more fragments – during collisions. 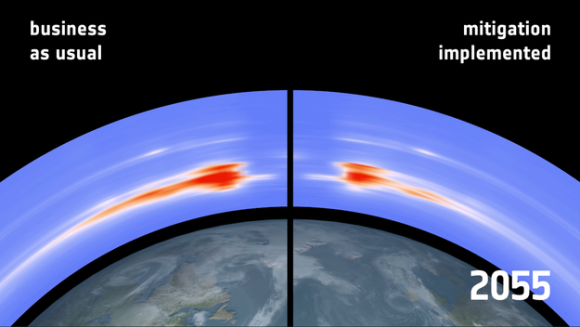 This illustration from ESA suggests how much debris might exist near Earth’s poles if no “cleaning” operations are undertaken, versus the smaller amount of debris if we do try to clean up these orbits, by the year 2055. The area above Earth’s poles is particularly susceptible to collisions because it’s where all the near-polar orbits overlap. Illustration via the European Space Agency.

There has been a major collision in near Earth orbit about every five years, in recent years, but that rate is going to increase. That’s according to the video below, from which much of the information in this post was taken. If you have 16 minutes, and want to know more about space debris, the video is worth watching.

If nothing is done and the rate of collision continues to increase, then – eventually – spaceflight would no longer be possible. That wouldn’t be in this century, but possibly a couple of centuries from now.

Of course something must and doubtless will be done. The question is really … what? And when will we begin? 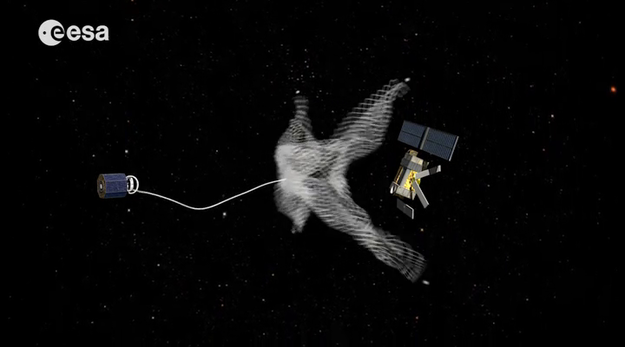 Concept for future deorbit mission via ESA. One idea is, literally, to capture orbiting debris using a big net and return it to Earth.

What can be done to solve the problem of space debris? For future space missions, it should be possible to deplete unused fuel before decommissioning satellites. That’s important because much space debris is caused by accidental explosions from unused satellites.

Another idea is to remove satellites at the end of their missions via controlled re-entry.

What about the tens of thousands of objects already in near-Earth orbit? The only way to solve the problem is to physically remove debris from orbit. One plan presenting at this week’s space debris conference in Germany involves catching space debris, literally, using a big net. Another proposal heard this week was to vaporize the debris with giant lasers.

The experts haven’t agreed on the solution to the problem, clearly, and that’s why, they say, research and development is urgently needed now for pilot cleaning missions.

Bottom line: It’s no secret that debris in near-Earth orbit is an ongoing problem. Some 300 experts met in Darmstadt, Germany this week (April 22-25, 2013) at Europe’s largest-ever space-debris conference. Not surprisingly, they concluded that spacefaring nations need to take space debris seriously, because the problem isn’t getting better. They urged action, now.